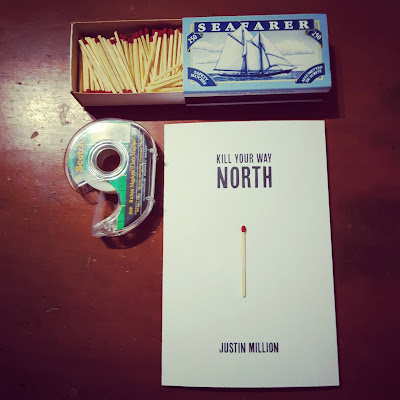 Elisha May Rubacha lives and writes in Peterborough, ON. She was a finalist for Peterborough's Outstanding Emerging Artist Award (2018), and shortlisted for the PRISM International Creative Non-fiction Contest (2016). Her chapbook too much nothing was published by Apt. 9 Press (2018). She is the editor and designer of bird, buried press.

bird, buried press is located in Peterborough, and publishes writers and artists from or living in Ontario.

A: bird, buried press publishes writers and artists from or living in Ontario, and frequently produces work with one-of-a-kind features. July 16th 2020 marks our fourth anniversary. I had been making zines since before I knew they were called that, so the press was a natural progression from there, but wouldn’t have happened if Justin Million hadn’t come in to my life almost exactly one year before we launched.

A: I think my first time at the fair was in spring of 2017, and I’ve been to most of them since. Ottawa treats us Peterborough folks very well, and it’s always worth making the trip. I especially love when I get to sit near Cameron Anstee of Apt. 9 Press, and Michael e. Casteels of Puddles of Sky Press. As someone who has done a lot of live bookmaking as performance, it’s a pleasure to watch others casually doing their thing while people browse their collections.

A: It’s hard to say. The press has gotten very behind since I started working full time as the knowledge transfer specialist at Nourish, a community food initiative in Peterborough. I have several projects waiting in the wings, but I probably would’ve just sold through back catalogue including the last ten copies of Justin Million’s apocalyptic poetry narrative Kill Your Way North, which I made for Artspace’s annual Book + Zine Fest here back in February.

A: The biggest slow down for me has been the fact that my printer broke part way through printing Kill Your Way North. Those last ten copies I mentioned are actually still sitting on my desk unassembled as a result of not being able to get the printer fixed to print the final pages. My plan is to print on the lesser of my two printers, and market them as “pandemic copies”. For a book about the apocalypse I think this is actually value added. These will be available through the bird, buried press Etsy once I get around to making an insert describing the differences between them and the previous forty copies, and finally finish the assembly. My desk has started to spill on to the kitchen table as a result of this delay, so Justin will definitely be relieved to see them completed and get our dining area back.

A: I helped Justin with the virtual launch of his Apt. 9 Press tradebook Ejecta: The Uncollected KEYBOARDS! Poems, but I haven’t done anything digital for bird, buried press yet, mostly because there is nothing new out to promote. We have seen a few virtual poetry readings from the comfort of our couch, including Jeffrey Blackman’s weird and amazing Tree Reading Series performance. I also attended several events during the Pen to Published conference. It’s nice to see the literary community trucking along through this, though I do worry about artists doing so much work for free. The arts are undervalued as is, and if we give too much away, people will get even more accustomed to exploiting us.

A: One major hurdle for me right now is that my one functional printer can’t handle card stock so printing covers isn’t possible for the time being. If I do choose to print a book anytime soon, it will be with the limitation of having to make covers by hand. This is definitely within the aesthetic of bird, buried though, so I see it more as an enabling constraint.

Q: What are your most recent publications? How might folks be able to order copies?

A: The freshest titles I have, aside from Kill Your Way North, are PTBO NSA by Katherine Heigh, and Subtitles by Albert Choi. Heigh’s book is a collection of found poems inspired by casual encounters ads on craigslist from Peterborough and the surrounding region. It’s very X-rated, and has an undercurrent of closeted rural queerness. Choi’s book is fiction, and focuses on a Chinese-Canadian photographer who travels to China on a work assignment. He looks like a local, but doesn’t speak the dialect, which leaves him feeling out of place until suddenly, he starts seeing subtitles whenever someone speaks. These are all available in very limited quantities on the Etsy.

A: My mental space is largely taken up by my day job and my own writing, but I have been working on an idea for some time that I will start moving on once the world opens again and I can sell in person. I won’t go in to too much detail, cause the heart of the idea is in its visual impact, but I hope to put out a call for submissions from poets living with chronic illnesses. If that describes you, make sure to follow us on Facebook so you see the call when it rolls out.