Nuts and bolts. Which comes first? The answer interests me. Sometimes bolts; almost always nuts! At other times, especially when writing is happening in real time, the question is forgotten…. When a poem is beginning or middling or ending then there’s no need for the question. Questions about how a poem begins seem especially instrumental as points of departure when no poem is forthcoming or beginning. If I can know how a poem begins, then maybe I can begin one. A poem, it seems to me, is always beginning.

From another angle, who knows how a poem gets started? When confronted with this question, I don’t. In so many ways and a lot of the time, the beginning arises out of mystery. Some immaculateness.

If a poem’s a living thing like a plant, then its beginning is a seed. Or, the beginning is a bird that eats and passes the seed on, somewhat fortified, to a locale where conditions are more favorable and growth more likely.

This process may suggest silence, but monitor for heartrate and you’ll hear one. Ah ha! That seems to be the way a poem gets started for me—auditorily. Via a seed sound, word, or phrase. I hear something whispered, overhear speech or a birdsong or a gate creak—flints that spark my mind or serve like a hand shot straight up inquiry.

As I think about these spokens and overheards some qualities emerge. They are typically the most obvious things said: Something is not right here. Often declarative. Ambiguous. A double entendre. Often paratactic: I’ll be mercy if you be a killer whale. Sometimes mishearings: Age of Aquariums. Alliterations. Assonances. Aphorisms given new life. Chiasmic reversals and antimetabolic turn abouts—Let me go, so I can come back, my mother said.  Repetitive echophenonomena like the Gila woodpecker beak-banging the corrugated roof. Syllogistic.

So, there’s a sound, a phrase, a statement, an utterance of varying qualities whose wind thrums my mind. I use a notebook. The words get written down. Often there is more listening and recording on the page. Collages of meaning and tone. If not then, later.

A parallel visual process may also unfold. Instead of hearing the phrase, it’s read or misread. It gets written down. That may lead to an on-the-spot erasure or mining of language, words, word pairings. More phrases written down.

Mood may dictate. Mood of listener, reader. Mood of what’s heard and read. Or, is that intuition talking. Both filter and factor the selection process while ‘I’ stays in the background. One part of the brain is occupied with listening or looking, the other finding. If the spell breaks and self-consciousness or willfulness interrupts this program, then it’s over for that sitting.

There isn’t necessarily sitting to make this happen or even with the intention for it to happen. There’s only openness to happening, then noticing when it does. A going with that.

It has always been like this. Since I was a kid, writing things down as if transcribing the sounded world. Writing things down because of how they sound. The pleasure of sounds coming together in meaning, in a way that interests. Of course, this implies that there’s an awareness of interest. An awakening alertness to sound, to how something sounds.

When considering starting a poem with a “loose structure” it takes a while for an example to arise. It happens, but not often. When it has, the structure is anaphoric: I’ll be… if you be…; I’ll be… if you be… “Ideas” tend not to be my flints either. If ideas, then they tend to reference subject matter. Maybe I’ll write about bees… Honestly, though, I can’t make anything happen in the beginning or ever. If I try or force bees, I get stung. Writing and beginning to write work in flow and flight and if I get out of the way of words. Plenty of sparks from words themselves. Their sounds unbound and bounding.

At the beginning, in it, there’s not the presence of knowing whether it’s the middle, beginning, or end. Order is a thing later discovered. The beginning is often the end, and then writing that proceeds is often writing to a beginning. Knowing where, when, what next, that can be a thing in the revision process. Often what feels satisfying is only so to no one else.

Reading. Reading takes place to sprout language, tone. To get in word mood. To warm up eyes and ears. To see if the conditions for writing arise. It’s the ears again; they have to hear something. When they do, the language boat is underway. Could be a short writing-reading spell or a day or night.

Bits, pieces, get assembled. Reorder can be a thing. What comes out is often disrupted on the way, so attention is given over to discovering what’s backward, diagonal, and sideways. From there line breaks.

At first, when typing from notebooks, assembling fragments onto a screen page, line breaks and lengths are left as is. In subsequent drafts and the more the assemblage is heard, the more apt the breaks and length are to be changed.

There’s a favoring of line as unit of meaning. One that adds to or contradicts the conveyance of the whole. Lines tend to accumulate via caesura and hemistich. All line lengths are to be loved equally. For breath rhythm and visual intrigue, a poem may mix line lengths. Love sentence as much as line, but sentences save themselves for prose poems. Delineated poems tend not to be made up of sentences. When they are the sentence is disrupted, disguised, an intervenor and sometime conscious objector.

I like beginnings, but can’t pretend I understand or know them. I think there may be a simple answer to the question how my poems begin—they just begin—but I only just thought of that—at the ending. 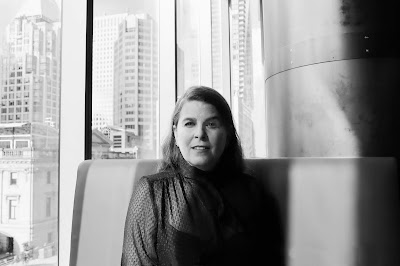 Jami Macarty is the author of The Minuses, a Mountain West Poetry Series title (February 2020) published by the Center for Literary Publishing at Colorado State University, and three chapbooks of poetry: Instinctive Acts (Nomados Literary Publishers, 2018), Mind of Spring (No. 22, Vallum Chapbook Series, 2017), winner of the 2017 Vallum Chapbook Award, and Landscape of The Wait (Finishing Line Press, 2017), a poetic response to her nephew William’s car accident and year-long coma. Her poems appear or are forthcoming in American, Australian, British, and Canadian journals, including Beloit Poetry Journal, The Capilano Review, Otoliths, Orbis, and The Rumpus. She teaches poetry and poetics at Simon Fraser University; yoga and meditation privately. As co-founder and editor of The Maynard, she promotes the work of other poets and artists. On Medium, she writes Peerings & Hearings–Occasional Musings on Arts in the City of Glass, a blog series supporting arts and community (begun in 2016 as a featured column for Anomaly/Anomalous Press). Her own work has been supported by Arizona Commission on the Arts and British Columbia Arts Council, among others; by residencies at Mabel Dodge Luhan House and Banff Centre, by Pushcart Prize nominations, by the tireless editors of literary journals and presses, and by beloved readers.
Posted by rob mclennan at 10:00 AM