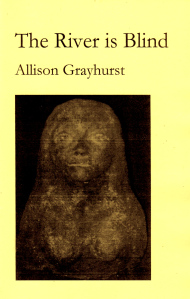 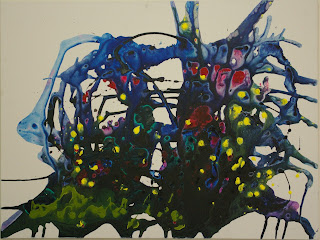 Posted by Ryan Pratt at 9:01 AM No comments: 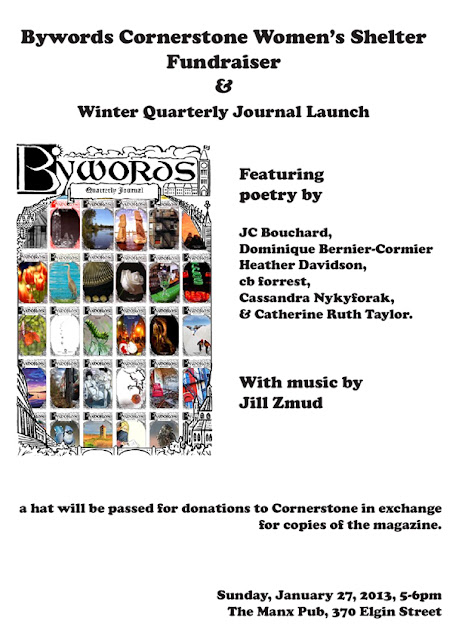 Posted by Amanda Earl at 6:47 AM No comments:

A chapbook is by necessity a diminutive taste of poetry. A morsel of a poet’s work – a good introduction to someone you have not previously read or perhaps a reacqaintance, a revisiting with old friends.

I would consider George Elliott Clarke in the ‘old friend’ category, not literally but in the sense that I’ve read much of his poetry over the years (almost all of it, I think) and reviewed previous collections here and there (See http://markfrutkin.blogspot.ca/2011/08/book-review-17-blue-by-george-elliott.html). I would rank his book, Whylah Falls, in my list of top five Canadian collections of poetry, all-time. No other Canadian poet is so lavish with sensual detail and so bold about the physical world and the human body. And in Selected Canticles he delivers again, as he always does, giving us a marvelous slumgullion of a miniature feast, like a serving of appetizers so rich you don’t need to eat the impending meal.

Of course, Clarke always goes for the ear as well as the eye: “not even the squeal of a squall / as waves whacked rock,” or “blossoms blaze a branch.” And he can be humorous too. In ‘À Cristophe Colombe,’ he calls the Spain of Columbus’ day, “a comic-opera Empire”. One can almost picture a Gilbert and Sullivan musical based on Queen Isabella and her famous explorer.

Of course, no one in Canada comes anywhere near Clarke’s ability to write frankly about sex – raw, graphic and straight-up as home-distilled whiskey. He doesn’t scruple to use the good old Anglo-Saxon sex words: fuck, cunt and anus appear liberally throughout these poems, several of which address the black man’s role as hard-driving lover of white women. In a sense, this becomes a trope of the payback for or escape from slavery. Clarke is always conscious of the black man’s position in our world and in history but these poems are not the least bit didactic. They’re the real thing.

No one joins poetry and science as fluidly as Stephen Brockwell. The Crawdad Cantos contains what has become one of my favourite Canadian poems. ‘A Primer for Drainage’ is from The Evangelical Handbook for Engineers, a wonderful conceit to pull together the world of the spirit and the material world of the engineer, builder, scientist. You could be an atheist and still delight in his take on God as inherent in platinum-iridium bars and krypton-86 emissions. The last few lines are so striking, I must quote them in full: “Among time and distances, he is the absolute constant, / the being that lets being be – and every culvert, / aqueduct, conduit, sluice, grate, trench and duct / merely drains the ephemeral projection of his eternal tears.” I think including the word ‘duct’ in that list is a sure sign of poetic brilliance as it resonates with the last word of the poem, ‘tears’.

There are other excellent poems here, especially ‘Parrots not in Cleveland’ (from Cantos of the 1%). Besides the fact that Cleveland, my birthplace, hardly ever appears in a Canadian poem, this poem has a humorous tone that I very much appreciate. Drinking banana daiquiris in Cleveland in March is odd enough as the subject for a poem but the poet also says he can imitate a parrot’s voice: “I’ll need a trumpet, / a trunk full of Hawaiian shirts, a pair / of holey sneakers spattered with blue paint, / a month of sunlight to give this snow the shaft”. ‘Sunlight’ and ‘shaft’ – once again, a brilliant juxtaposition that plays on the two definitions for ‘shaft’. And again, this poem ends with a striking image. But I urge you to pick up this chapbook to learn what it is.

In Shikibu Shuffle, two poets, Andrew Burke from Australia and Phil Hall from Perth, (who won the Governor General’s Award for Poetry for his fascinating book, Killdeer) have collaborated to produce a collection of fifteen poems based on the five-line form used by the Japanese poet, Murasaki Shikibu (973-1014). Each poem here is ten lines long (with a few variations). It’s difficult, if not impossible, to determine who wrote what, and exactly how the process worked. In any case, the result is a kind of medieval Japanese jazz with a flowing series of riffs that sometimes connect and sometimes don’t. The musical play here reminds me somewhat of Jack Kerouac’s Mexico City Blues (which was influenced more by hardcore jazz than what we now consider the blues). There’s a vibrancy and freedom to the images and their links here, in this back and forth ‘shuffle’, and sometimes the results are striking: “a Chinese dragon of smoke / wearing my dead friend’s clothes / above the marina” or “pale cuticle” (for the moon), or the exceedingly strange and suggestive “to weave submerged antlers / breathing blue at their tips”. This is a collection that can be read more than twice.

The very fine poet (and novelist), Robert Kroetsch, died in 2011. This small chapbook, Further to Our Conversation, consists of three letter-poems to friends, interspersed with three very short poems. The first letter-poem, ‘Dear John Lent’, reveals the wonderful line, “Our first cry is a poem that contains everything” and the intriguing phrase “Icarus in a car...” These actually do feel like thoughts that came to Kroetsch after a late-night conversation with a friend, a kind of soliloquy inspired by a dialogue. Kroetsch’s poetry was always wonderfully experimental and refused to hew to the straight and narrow furrows that characterize much of mainstream Canadian verse. I see him running his plough in all sorts of mad geometries across those prairie fields: ovals within ovals, spirals, secret divinatory crop circles of poetry. His sense of the comic is excellent: “Punctuation is a middle-class pretension. So is a toothache. In heaven you have to sit eternally staring at a bright light, so be sure to take your dark glasses.” (‘Dear Jeff Carpenter’) He ends the same poem with the wonderful lines: “I once travelled halfway across Spain to see St Teresa’s bent left elbow safe in a glass jar. We each write poems as we see fit. But then, what poem isn’t a relic?” (It makes me want to ask if St Teresa wrote left-handed!)

Another line in ‘Dear Jeff Carpenter’ makes light of the inevitable, and probably tells us much about what kind of person and poet Robert Kroetsch was. In four words that embody a kind of simplicity, acceptance and peace, he writes: “Death, that necessary pest.”
Posted by rob mclennan at 4:59 PM No comments:

Posted by Max Middle at 1:48 PM No comments: