Because I am a relatively unknown writer, who often goes to great lengths to remain faithful to the impulse to write in a life where I am not typically known for writing or poetry outside of a few small circles—I suffered a kind of soul-nibbling doubt in responding to rob mclennan’s call to talk about writing.

In fact, it has been more than a year since rob first extended the invitation to me. And, despite starts and stops which may have indicated progress, these attempts were abandoned due to the embarrassing platitudes that seemed first to fruit.

I value this outreach as increasingly, having little time to work on reviewing books, my prose is regularly limited to explanatory notes on invoices and bland, perfunctory emails. So it is with a degree of intense self-scrutiny that I have trashed the first few attempts at this in which, I attempted to be “interesting” or “enigmatic” or worse, both.

I am a poet and not a scholar and perhaps, as John Ashbery notes in Other Traditions,  more often I feel that “poetry is the explanation.”

For the most part, the only artifact(s) of process or putting together the poem is the poem itself. Lots of my work begins as fragmentary notes that act as catalysts for a poem or series of poems in which some basic riff has been stored on a slip of paper,  text or email and then is restored in a poem.

This is to say, the writing itself is the documentation of a creative time. I am terrible at saving drafts as composition is a movement of steps, missteps, deletions and accretions that happen quickly during the initial impulse. I revise for sound.

The impulse follows the inspiration and is the attempt at clarity rather than the making of clarity itself.

But I also recognize the value in being generous in speaking about process.

What keeps me writing is a sense of community or readership, however or wherever it may be.This is perhaps one of the more reasonable aspects of opting into a graduate writing program in which a writer can meet a readership, even if it is brief.

The first few readers of my work, outside of school, helped me into writing and have kept me going.

If I can take a brief detour for a moment:

There was a point in my life when I thought I might become an academic, but about a decade ago, I instead began cooking professionally. The decision came as an act of survival following the sudden non-existence of reliable teaching opportunities in the humanities as the economic “down turn” came. This “catastrophe” — from the Greek: “kata” down and “strophe” turn(ing) set me on the path to where I am today.

In 2008, I remember hearing the news of the Emergency Economic Stabilization Act of 2008— better known as the “bailout,” while driving to the grocery store in Marquette, NE. I was at a residency at Art Farm Nebraska and one year into graduate school. I had just left my job in academic publishing as an editorial assistant to focus on school and writing.

But also, a decade ago while living in Brooklyn, I soon found myself in the midst of luxurious time of leisure to attend three or four readings a week, go to the movies almost every week and be surrounded by a vibrant scene of writers, publishers, performers and creators—all of which helped me into a creative life.

Out of school and a year later, I began working at The Strand bookstore. There I met poet, publisher and musician Zach Barocas. As publisher of The Cultural Society, Zach was one of the first people I met after graduate school who was encouraging of the type of poems I was making. I mean, I was away from people who were paid to be interested in my progress. And on the other side of the country, David Lau and Cal Bedient made a home for my work in Lana Turner: A journal of poetry and opinion.

Also, around this time the musician, writer and editor Michael Barron introduced me to Nat Otting. Nat was doing everything and also, took an interest in me, publishing a chapbook.

These people among many others, whether they are aware of it our not, were among the scene of people that propped me up, inspired me and nudged me along in those fledgling days of poem making.

Two years later, after a string of unsatisfying temp-jobs, I found myself in culinary school at The French Culinary Institute. My logic was simple: I could live anywhere and cook to support myself. Everyone needed to eat.

This is to say, now I spend a lot of time cooking and thinking about food.

When I am free from the obligations of work, I take walks. I like to walk everywhere, but especially in the woods. There I get to thinking in a different kind of way. My senses need  to be alert in order to avoid tripping on an exposed root, or knocking off my glasses with a branch.

There are two short hikes I like to take often. And, although I have been on these paths many times, I find that each time I am faced with the same onslaught of small decisions to make while walking so as to avoid falling over, etc.

While I am usually overcautious of making statements about my work, I feel that writing is learning how to make many small decisions to keep going.

And to this end, I do not have any kind of regular ‘writing day’ though my ideal situation is to get dressed, leave my apartment and go to a cafe a work for few hours…

But to return to the feeling of connecting with other writers and artists:

It’s such a small community of people who care about poetry. So my advice is to be generous if you can, when you can, to all people in this community or any community for that matter.

I guess what I mean is that it happens quickly. If you are lucky, you meet a few people that you can talk to and that talk to you in a way that offers something nourishing, something delicious, something like a meal, in which the feeling is almost as important as the food. This helps you on your way. 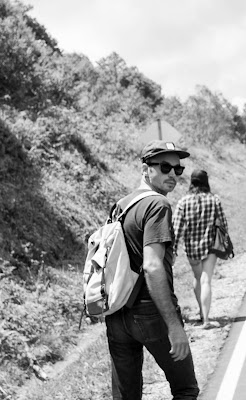