or, where a poem begins

A poem is always a phenomenological event preceded by a period of relative inaction. In the past, I would attempt to induce poetry through methodological means—reading a book by a writer I admired before attempting a mimicry of my own poetry or imbibing altering substances so as to “trick” myself into the process; such methods always produced lacklustre results. I’ve come to accept that poetry follows behind states of patience: patience with myself and with language, through periods of silence and profusion alike. The time spent in lieu of writing is necessary to any poetry that is to come and cannot be avoided or otherwise deceived.

When I truly begin a poem, authentically begin a poem, another poem follows soon after. Poetry “appears.” Poetry appears, as though from a wellspring, through engagement with whatever psychic continuities were previously backgrounding this time of relative stasis, finally providing a release or means through which my internal experience can again become an “outside.” That this process often takes the form of poetry is, I suspect, an arbitrary distinction. These days, it just as easily takes the form of a painting, theatrical or dramatic writing, or hybrid prose. Form arises organically, without much premeditation.

While poetry initially arises in such an inexplicable way, I am, these days, moving towards a vastly different approach to composition. Over the course of the Covid-19 pandemic, all process has been altered. Between artistic practice and the structures of my daily life, everything has become subject to difficult interrogation and sometimes breakage. Poetry has likewise been subjected to this ungrounding. The pandemic has completely changed the ways in which I relate to composition, poetry— art practice and to perception in general. The work of other writers has, during this time, become a lifeline, a way of thinking through my inner experience while maintaining a connection to that outside we’ve all been distanced from. This past year, I’ve occupying myself with comprehensive readings of the work of Friedrich Nietzsche and Édouard Glissant alongside Josef Albers, Arthur Schopenhauer and Johann Wolfgang Goethe’s writings on colour. I’ve been reading artist biographies and closely looking at visual reproductions of their work (Etel Adnan, Leonora Carrington, Dorothea Tanning, Ernst Kirchner, amongst others). I’ve been watching films featuring tragic heroines, films where form disassembles appearance, films which are paintings and poems (I repeatedly think to Pier Paolo Pasolini as filmmaker, poet and painter of light). So yes, I am often prompted by other writers, artists. In engaging with other’s thought I am able to apply some comprehensible system to my own process, or at the very least access some means of thinking through this extended period of difficulty.

My compositional process begins as a haphazard overflow, a somatic process of excision. My poems are never singular, standalone pieces but interconnected in a vast network of narratives and formal systems. This initial point of composition once began in physical notebooks— these days I turn directly to the keyboard. Notebooks are still important starting points to my thought—I have several in active use. A notebook for my notes on readings or films, a sketchbook, a bullet journal, one for painting techniques (I am currently engaging in a material art practice; one whose techniques have been melding into my writing in unanticipated ways) and another notebook for lineated poetry (at the moment, disused).

The second step to this process is, and I use this word conscious of its implications, a self-cannibalization of all that has been written prior to this point. While the writing which preceded this state was relatively free, unbound, this second state is a pained taking apart of all that had been written to this point, a reformulating and restructuring which is always experienced as incisive forfeiture. I was recently talking with Cynthia Mitchell, an incredible visual artist, filmmaker and dear friend, about the process of painting being a continual loss of a painting’s former image. Such composition is always an irretrievable replacement with another image, this image then being replaced in order to progress the work to its final point. This final point is itself only a sensed decision to cease engagement with what is essentially a practice of continual loss. I see an affinity here with the practice of writing—though each loss is not so permanent as it is in a painting (inasmuch one is usually able to revert to a previous point in the writing if so desired), bringing a written work to a point where it will be comprehensible to others is always a kind of loss of that initial mystery, even if it finally results in something more beautiful and complete to behold.

The idea of this process of continual loss now informs my process, one which ebbs and renews as paintings do, in self-erasure and revision before beginning again with another image, another poem, another book, another— 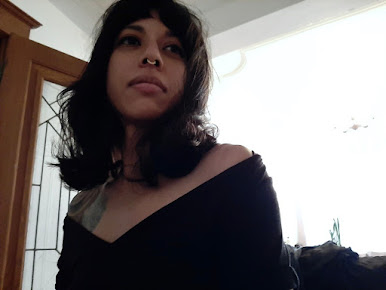 Nicole Raziya Fong is a writer living in Montréal, Canada. She is the author of PEЯFACT (Talonbooks, 2019) and OЯACULE (forthcoming with Talonbooks, 2021). Past work has appeared in publications including Social Text, The Capilano Review, carte blanche, Cordite, filling Station and The Volta as well as in translation in Exit, OEI & Revue Watts.
Posted by rob mclennan at 10:00 AM No comments:

When I first started writing poetry, I wrote lines to capture images in my mind. I cannot say for certain, but I think those images have always been there, and I do not know why they are haunting me. After a while, I wrote lines that were pleasing to my ears to draw out those images.

And then, I started to translate Korean poetry into English. I came to America when I was twelve years old. I spoke Korean at home and learned English in school. However, I still do not know what language I dream in, and when I wake up from my dreams, I am left with afterglow of visions that transpired in my sleep. Translating poetry taught me how to translate those images into my languages.

I do not think my two languages take turns inside my head. They are always at play or at odds with each other. I also find it difficult to tell the difference between when I am translating and when I am writing my own poetry.

I have learned that when I am translating those images from my head into my languages, the best way is to start with an assortment of sounds that are unlikely to happen naturally in everyday speech. For me, this usually means snatching an aggressive rhythmic effect whenever I hear it. This might turn into some random hums, or I might try to fit it into some well-known syllabic meter in Korean or accentual-syllabic meter in English. I keep at it until something get caught in the net of those sounds, and what I catch is one of those images that have been floating inside of me. I believe it is a fragment of the whole thing itself that is still buried deep somewhere in the soul.

I am not sure, and I do not mean that I somehow standalone. I only mean that at least when I am in the moment of writing these days, I start with humming. Some internal music is the prompt, and the words or phrases that give shape of language, or the form of sense, to this music have roots in things that I have read or heard or seen.

I start working on what I think will be my first line, and then I write until I forget what I thought was my first line. I am terrible at making titles for my poems, even though that is often the true first line of the poem.

I keep a small notebook around to write down anything that pops in my head. But, for some reason, I never go back and use what I wrote down and start working from there. When I start a new poem, I always start with blank page. I think the act of writing something down may be more important than what I wrote down when it comes to keeping a notebook.

How are line-breaks (or the choice to ignore them) chosen? Etcetera.

I tell myself there needs to be a good reason for a sentence to not end when the line ends on a page. Having said that, I have translated many prose poems, such as the poems of Yi Sang (1910-1937), I have always felt that each of his prose poems are in fact an exceptionally long single line. When I read them, I can see he had no reason to end them with any breaks. He also does not use the breaks between words that is one of the rules in Korean grammar. He hardly uses any punctuations. There is an unrelenting force pouring out from his sequence of syllables. That force gives shape to his images. His images are dark as shards of obsidian cooled in the aftermath volcanic eruption. And the shards are sharp enough to pierce through the false reality that was imposed on him and his people in the wake of colonialism and fascism.

My poem Code, which was published by Afternoon Visitor on their first issue, is one of the first poems I was ever proud of. I no longer write poems like it, but I learned a lot about caesura, which is a type of line break, when I was working on that poem’s last stanza. I learned that repeating a word after many pauses could create a whole new sensation for the repeated word:

Inside the teacher’s office

is a slab of stone, roughly chiseled

with shapes we have no key for.

It is wide enough for me to lie down

and stretch until my extremities

He demands I see a dolphin

where he sees one. As his favorite, I must

find the white that swims in black.

The teacher asks I think on the dolphin,

how it floats in the ocean

filled with other life.

I fail. I tell him I have found it.

He believes me. I fail again.

I lie on the stone and swim. 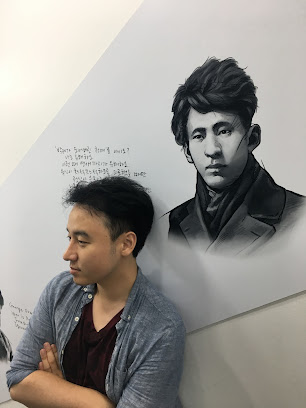 Jack Jung is a graduate of the Iowa Writers’ Workshop, where he was a Truman Capote Fellow. He was born in Seoul, South Korea, and immigrated to the United States. He received his BA in English from Harvard, and an MA in Korean Language and Literature from Seoul National University. His translations of Korean poet Yi Sang’s poetry and prose are published in Yi Sang: Selected Works by Wave Books. He is the American Literary Translation Association’s 2021 Emerging Translator Mentorship Program Mentor for Korean poetry. He currently teaches Korean poetry translation at Literature Translation Institute of Korea.
Posted by rob mclennan at 10:00 AM No comments: