ON THE ROAD TO THE NEXT POEM

Thirty-five years ago, when I was thirty-five, I did a lot of construction. It was a different way of writing, more craftsmanly. Now it’s more mystical. I follow the first line till the poem runs out of gas, or it completes itself. It sounds kooky, but that’s how it happens now.

The first line makes me listen to it. Then it’s all about listening. I don’t have to write the poem, I just have to hear it. The duration of the first line sets the structure. If it’s a long line I start writing in long lines. If it’s a short line I start writing in short lines. Lately, a number of poems have arrived as sonnets. I didn’t count the lines until after the poem was written. My short poems have always been haunted by the sonnet. Sometimes they are two lines less. Sometimes they are two lines more. But they tend to operate in sonnet territory.

When I was a young poet I worked with the kernel of an idea a lot. Many of my poems were idea driven. Now I have no idea what a poem is about until after it’s written. The poem tells me what it’s about. I don’t tell the poem what it’s about.

OTHER POETS, OTHER MEDIA

As a younger poet, I was prompted by the work of other poets all the time. That was probably my primary way of getting poems going. Reading to write. Hunks of newspaper stories wound up in the first book of Report On The Second Half Of The Twentieth Century. I’d quote something from a newspaper story and then offer poetic commentary.

I don’t write as much as I used to. It isn’t a daily thing anymore. During the pandemic, months have gone by between poems. That just didn’t happen when I was younger. But I’m seventy now. Most of what I’m going to write has already been written.  So writing has become more fanciful. I don’t push at poems trying to get them to arrive. I don’t try to manufacture the poetic moment anymore.

I remember that Joe Rosenblatt used to write down good lines on index cards. That made no sense to me at all. But different writers write in different ways.

These days the first line announces that a poem is happening. Then I just have to follow it, I just have to hear it. I have to stay out of the way with any ideas I might have. It’s more like what Spicer called dictation.

I have been writing in notebooks since 1980. I find them extremely useful in sustaining the idea of a book. I’m writing a book in these notebooks. Most of my books occupy somewhere between four and seven notebooks.

Early on, I was intrigued by Margaret Atwood’s line breaks. They didn’t make any sense to me. So I kept looking at them, studying them. After a while I started to understand how they were dramatizing things. Line breaks = world view. Or certainly they can function that way.

Bowering said something about how my lines ‘tilt” now, and I suspect that it is this that he was talking about.

OTHER WRITERS AT THE BACK OF YOUR HEAD

Everything I’ve ever read is in my head somewhere. Louis Dudek used to talk about the “word assembler.” Spicer talks about the Martians. Whatever is putting the poem together has access to whatever is in my head.  Are there other writers in my head? Of course there are. Do bits and pieces of other writings make their way into Ken Norris poems? Yes, they do, and they always have done so.

A GOOD OR A BAD EXAMPLE

Here is “Early Morning Waves,” from Hawaiian Sunrise, written in Hawaii back in December.

I took the Wallace Stevens franchise to another shoreline.
Now I’m staring at the early morning waves.
They roll in, blue and unafraid, white-capped and peaceful.
This ocean and I go back a long way.

You can’t expect everyone to write at the Ontario cottage
and come up with something different. I travel—
to places where the white birds swoop and soar.
There’s a tin roof waiting for me, there’s a tropic heart
waiting to be born.

When she sang beside the genius of the sea
he was there to hear it, and to take it further.
The waves are our brave counsellors,
breaking here, in the lush greenery, at our feet.

When I read it this poem seems so logically put together. It’s almost a little mini-essay.
There’s almost a series of thesis statements.

Line followed line. I didn’t build this poem at all. Or maybe, the building now takes place at such a rate of speed that it doesn’t look like building to me.. It looks and feels like improvisation or dictation. The poem was written in one sitting in ten minutes. How it looks on the page is how it looked on the notebook page.

Little things I notice. In the title, are we talking about the waves that are breaking or the early morning waving? In the last line, there is sort of a gesture to the surround with “the lush greenery.” That is the one bit in the poem that I later tried to change, and anything I tried just didn’t work. So I just have to trust the poem and the reader to get it right. Grammar takes you one way, sense takes you another..

The poem is haunted by the Wallace Stevens poem “The Idea Of Order At Key West.” Beside the sea is where the action is. In this case there’s no singer and no listener, except that the last stanza drags them in. The relationship seems to be more about the waves and the poet who is watching them and listening to them.  Instead of an idea of order, then what? Perhaps the inhuman counselling the human?

I haven’t written any poems in about three months. That is an unusual state of affairs. In my youth I used to write six poems a day.

The last poem I wrote is called “On Spadina Road.” Maybe it will see the light of day. Maybe it won’t. I still throw out 80% of what I write. I wrote it in late March or early April. It is now late June.

Maybe poetry is in the process of abandoning me. It’s been known to happen.

It happens. I’ll sigh a huge sigh of relief when the next poem happens. 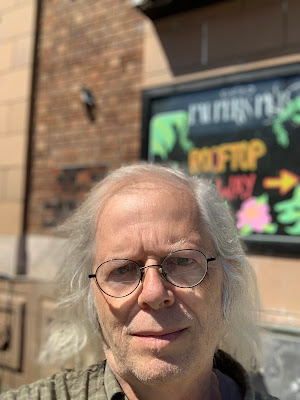 Ken Norris was born in New York City in 1951. He came to Canada in the early 1970s, to escape Nixon-era America and to pursue his graduate education. He completed an M.A. at Concordia University and a Ph.D. in Canadian Literature at McGill University. He became a Canadian citizen in 1985. For thirty-three years he taught Canadian Literature and Creative Writing at the University of Maine. In 2021, Guernica Editions published South China Sea, and above/ground press published HAWAIIAN SUNRISE. He currently resides in Toronto.
Posted by rob mclennan at 10:00 AM No comments: