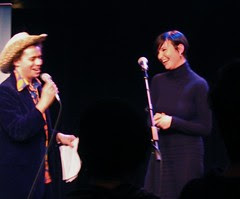 The CBC Poetry Faceoff was Feb 25 in Ottawa. The show will be aired on Bandwidth on Saturday but a full room at 4th stage NAC got to see the poetry competition live with Alan Neal hosting in his famous velvet suit, this year topped up with CBC's answer to the Hawaiian shirt. Here he is with a representative from Sage Youth, the literacy group that door proceeds went to. They offer free tutoring for youth at risk, ages 5-18, in homeless shelters and community centers. Their clientele are kids in challenging circumstances, such as new immigrants and kids with learning disabilities. They offer a low tutor student ratio.

There was a decent-sized crowd. This photo from intermission catches about 1/3 of the enthusiastic room. People were asked to do the drumroll on the table since the drumroll was cut due to CBC cutbacks. ;)

There were swag bags of CBC merch for questions on lyrics about heat and trivia questions such as who is Canada's Poet Laureate a) George Bowering, b) Dennis Lee, c) John Steffler or d) Margaret Atwood.

Which children's show was bpNichol a writer? a) Sesame Street b) the Muppet Show or c) Fraggle Rock.

There was also practice cheering and snare drum effects. 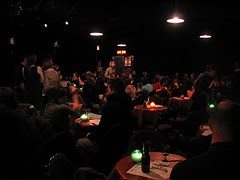 At halftime, while votes were counted, Oni gave a quick update on her poetry travels. 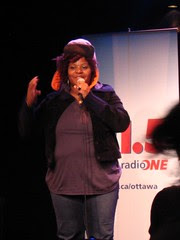 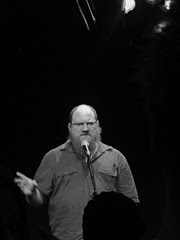 Rusty performed a poem on Icarus, the real story and how Daedalus reported it wrong. His feathers did melt off, each feather a poem taken too high, and he did fall, but he didn't die. He fell onto the backs of other people who fly, who saved him from falling all the way, with their own feathers supported him to fly another day. With community. 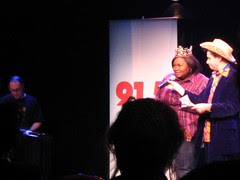 The turning over of the crown from last year's reigning Queen, Q the Romantic Revolutionary.

The poets to represent Ottawa are more of a team themselves than competitors. Those who were vying to go to the provincial level competition were to be: Danielle K.L. Grégoire, Free Will, Stachen Frederick, Michelle Wardman and Ian Keteku, a.k.a. Emcee E. Frederick became ill the morning of the competition so CBC producers called on Capital Slam poet Nathanael Larochette to fill-in.

While the other 4 got their prompt 2 weeks in advance, Larochette had to compose and perform for broadcast a poem on the subject of "heat" within 12 hours. He was up for it, although he said when he got the call, had he been awake, he might have thought twice. But in life there is just doing your best.

Each poet had quite a different take on heat. 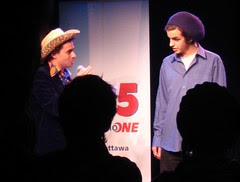 Free Will interpreted it as turning up the heat to make a political revolution by 2010. "One revolutionary gone is not a revolution dead". He incited change of the corrupted systemic oppression of natives by whites and to overturn government "scum" who should roast in hell. The 18-year old has a new CD for sale of his slam poetry. Last year he won the spoken word competition and represented Ottawa at the National Festival of the Spoken Word 2007 in Halifax. 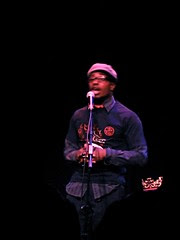 Ian Keteku, a.k.a. Emcee E twisted the tone in the room 180 degrees. He's a journalist and the founder of the Hip Hop Initiative which seeks to destroy preconceived notions about hip-hop culture and show how spoken word is a tradition of oral culture not urban decay. He was a semi-finalist for the past three years on Canada’s Next Great Prime Minister completion

He opened his time at the mic by saying: "I don't have a poem. I have a problem. I just got laid off of my job as dragon slayer." He went thru how hard it is to find damsels to save this days, women being so self-reliant and dragons so rare. He spun in a little politics and some comic twists of relationships of falling into a slow moment into someone else's pure beauty where she "pierces the heart/ like a good book/ like the English patient" (which got ripples of laughs) "but no time for this I'm freezing my ass off". When he did find a dragon, they roasted marshmallows and just chilled together. He recommended him some cream for those dry scales. 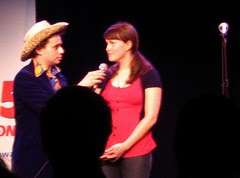 Michelle Wardman (seen here pre-formance as trying to extract herself from saying she is a tree hugger, literally). Asked what kind of trees she likes to hug she said "I like the big ones." Blushing madly she tried to correct herself saying she knows the theme is hot but she didn't mean it like that. She likes old ones. Neal then said, and we're not going to get it any safer for radio from here. Next question.

When performing she opened up by singing and her take on heat was the crazy cotton candy throbbing member love where you don't even care anymore if the poem you write is any good or not. She got a rousing cheer from the audience for her piece too. 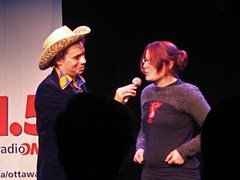 Danielle Grégoire took her cue of "heat" to be literal, global warming and homelessness in -40 degrees before windchill where you skin freezes in under a minute and why don't we care about the people right here any more than the pigeons. When we think globally do we forget what is right here. Don't get me wrong I'm not saying we should pollute but a few degrees warmer on the streets where people sleep...And she related the story of Ben, a street artist who asked for a blanket, and would it be too much to ask, for a pillow too. And his eye pop when she actually came back with them and gave him them. She talked about resilience of species and how they adapt, how monkeys stranded on a Mexican island became diving monkeys to survive until they became a tourist attraction, and obese beggars but ate fruit that kept their diabetes in check. And if global warming happens, animals will adapt, people will adapt, because there is resiliency. 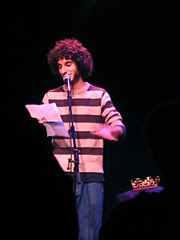 Nathanael Larochette, the late entrant took the idea of heat as heat as hate. One person who "sets afire everything in her path" when the "only heat in her life is hate." The poem took us on a magic ride (when with a single clap the audience opted in on the ride) to see the ripple effect of anger and our interconnectedness, how person to person, short fuses are transmitted. Giving a finger in traffic make someone else curse at a clerk, makes someone short with their kid, makes them nervous and distracted and walking into traffic among drivers preoccupied, caught in keeping alive their anger of argument from the night before. It was concrete and illustrative as Grégoire's. Could have heard a pin drop as he read and when he won, he got a standing ovation. 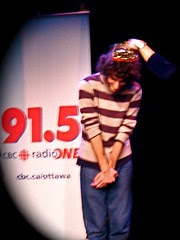 The crowning of the new king for 2008. His poem will be on the CD anthology of the best from each Canadian city competing.
Posted by Pearl at 7:57 PM No comments: 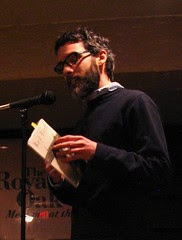 Ian Roy was the feature reader on Feb 12 at the Tree reading series. He read from Red Bird. (Good title. Mary Oliver will be snatching it in April.) 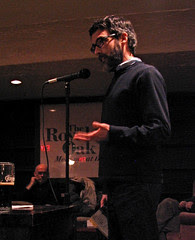 He segued from that book of poems to People Leaving from a lilypad hop poem to poem by some commonality (such as a house in Quebec). A snippet of poem? unfailingly, another failure and I swerved to the ditch to wait for morning light to begin, because I always think better by morning light.

The story he read was about a wedding party waiting for the bride to arrive. It was inspired by listening to the song $1000 Wedding. You can read a different story out of the collection here.

The open mic had a few people at it. I didn't get photos of everyone. 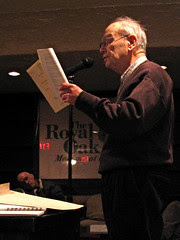 Murray Citron reading a Munger sonnet translated from Yiddish on birds and one of his own pieces contemplating family, what kids expect of parents and on a cowbird. The eggs are placed in the another nest to be raised by any number of species of birds, fed by yellow or blue wings where baby cowbird learns instinct sometimes lies. Murray read at Sasquatch as well. 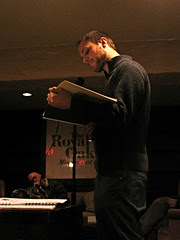 Josh Massey was reading from Historic song from Puddle Leaflet #21 a mardi gras poem of the king clothes in rags and the scullery queen/to usher thru revelry a new solar calm". Max read his Cottage Sestina which would really lose its effect to excerpt in part. 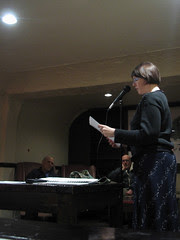 Pearl Pirie read a couple poems including a first run thru of train and bus west of Oujda the bus stopped in the middle/nothing in any direction//by nothing how often do I mean/ no building, no tree, no person/ no government printed sign. 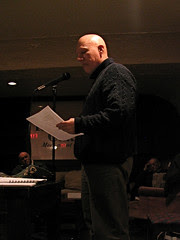 Sean Dowd read poems of meeting someone from years before and deciding we can talk live as neighbours/overcoming/basic wage and divergent paths.

Max pointed out in announcement that The AB Series is this Friday the 15th and will have Jay MillAR, Monty Reid and Emily Falvey.
Posted by Pearl at 10:19 AM No comments:


Dear Ottawa Poetry Aficionados,
For those of you who missed my review of Basement Tapes by Marcus McCann, Andrew Faulkner and Nick Lea, in Montreal mag Matrix, the article is now available for free online. The collaborative chapbook is published by McCann's press The Onion Union, and has recently gone into its second edition.
Posted by J Ferguson at 6:54 PM No comments: