A cartwheel is a strange thing. It implies movement but also return. It is cyclical. It is repetition with change. One arrives somewhere familiar but not quite the same as where one started. The cartwheel, or cartywheel, is an object of interest for Christine McNair. From her cartywheel press, to her notes from a cartwheel blog (“here's the part where we say what we mean & we mean what we say”), and now this chapbook, Notes From A Cartywheel (Ottawa: AngelHousePress, 2011), her exploration of the concept over the last few years has been wide and varied. She is also in the process of editing and producing an anthology focused on cartwheels. Her call for submissions draws attention to the productive capacity of the image:

)
n. 1. A handspring in which the body turns over sideways with the arms and legs spread like the spokes of a wheel. 2. Slang A large coin, such as a silver dollar.

In what sense are these poems “notes” from cartwheels? The title suggests the poems are written from within cartwheels, that the perspectives are perhaps moving laterally and circularly. These poems are anything but static. The book includes a series of poems built as anagrams:

These exercises in rearranging are astonishing. The central line in each is bookended by variations on the initial syllables and letters. The sounds are effectively turning cartwheels around one another. Each subsequent line is familiar but altered. Origins are recalled, but the meanings and perspectives have changed. McNair reduces language to component aural (musical?) parts, and unlocks reciprocal and competing meanings in the process. She takes a simple idea and creates tremendous movement.

Notes is a book of great variety. An untitled poem arranges words and type in a grid, horizontally and vertically, establishing a field of meaning that lacks a fixed referent. “biblio non-grata” catalogues search results for “cartwheel” from amazon and chapters, a list that runs from children’s titles to obscure scientific objects. Other poems, structured as lists, are experiments in contrast: “I am frank, honest, full of vigor and ambition. I am amiable and sociable. / I have problems being open. I accept solitude” (“five”). There are prose sections focused on a character named Catherine (“I Catherine, useless entrust myself to you”). Speakers confront direction and misdirection, knowledge and ignorance: "there’s due course then there’s also a fixed lack of relative position spiral delicious over black angled highway there’s coursework to be done / you lost your maps I pinned them to your black pants you still lost them you didn’t care / I play pick-me-up with bits of this and that and those I can't remember if we'll get there in due course" ("ten").

An important line in the book closes “five”: “I persevere.” The chapbook is committed to generative possibilities and contradictions of the cartwheel. It explores language through this central image, pushing as far as the words, as the letters, can bear. In “how to say sweetheart” the poem breaks down into description of the written marks of letters: “curve sharp curve curve / sharp sharp curve curve” before settling on “dot dot dot dot.” What is most admirable in the chapbook is McNair’s free exploration of a host of component parts of language and communication (sentences, images, words, syllables, written signs). She perseveres through meaning and non-meaning, privileging neither. Playful and free utterance, the joy of sound and image, are the core of Notes From A Cartywheel. The youthful exuberance of cartwheels seems an entirely apt anchor for McNair’s writing.

AngelHouse deserves acknowledgement for the production of the book. As usual, the press uses lovely paper stock and thoughtful, personal design. A series of scanned objects illustrate the poems, ranging from wooden type and coins, to polaroids and jewellery. The images extend the language of the poems, as well as assert the varied dimensions and modes of communication McNair is interested in.

McNair has been successful in recent years. She was shortlisted for the 2011 Robert Kroetsch Award for Innovative Poetry, she has seen broadsides published by AngelHouse and above/ground, her work appeared in the astoundingly beautiful anthology Dinosaur Porn (Toronto: Ferno House & The Emergency Response Unit, 2010.), she read at VERSeFest, she took part in the most recent iterations of jwcurry’s Messagio Galore (takes VII and VIII), and her first trade collection, Conflict, is forthcoming from BookThug in 2012. She is an exciting poet in Ottawa, and an active member of the community (we cannot forget her hosting duties on CKCU’s Literary Landscapes). McNair is due a trade collection. Conflict will be an exciting book. In the meantime, go buy Notes From A Cartywheel, the poet and the press are deserving.

Notes From A Cartywheel is being launched in Thursday December 1. Full event information here.

In/Words Magazine, Carleton University’s student-run literary rag for 11 years running, is looking for poetry and fiction submissions for its winter 2012 issue. The issue will be printed in late February, so send your submissions to inwordsmagazine@gmail.com by DECEMBER 31.

The issue will launch (materially) at VERSeFest 2012 and (metaphysically) on Literary Landscape on CKCU 93.1, where chosen contributors will be asked to read their work on air!

Posted by Bardia at 4:46 PM No comments:

Posted by Max Middle at 9:29 PM No comments:

Shirley Bear & Mark Truscott in the A B Series 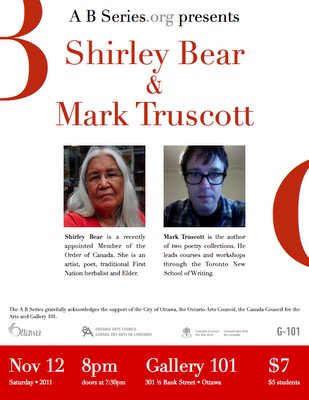 Shirley Bear was recently named a member of the Order of Canada for her contributions as a First Nations visual artist and cultural activist. She is a multimedia artist, writer, traditional First Nation herbalist and Elder.

The A B Series gratefully acknowledges the support of the City of Ottawa, the Ontario Arts Council, the Canada Council for the Arts, and Gallery 101.
Posted by Max Middle at 7:20 PM No comments:

Odourless Press (Ottawa ON) appeared without ceremony in August 2011. The press identifies itself as “a small Ottawa collective.” It has an active web presence, publishing poems near-daily on its blog as well as hosting poetry podcast content from local readings. Odourless chapbooks are single pages, folded or stuffed into envelopes, printed on both sides with a handful of poems. The clean, simple designs are a testament to creativity and restraint. Odourless accomplishes an awful lot with a single page. With a $0.50 price tag on each book, there is a whole lot to like here, and no excuse not to buy them all. 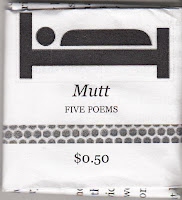 Ben Ladouceur has been busy in 2011. He read on the opening night of VERSeFest, published two previous chapbooks (Lime Kiln Quay Road [above/ground: Ottawa, 2011] and self-portrait as the bottom of the sea at the beginning of time [The Moose & Pussy: Ottawa, 2011]), and one broadside (TUKTOYUKTUK [Apt. 9 Press: Ottawa, 2011], not to mention his ongoing graduate studies. It continues to be a pleasure to find new poems from Ben available.

Mutt collects five new ones that walk a fine line between sadness and humour. Ben has remarkable control over his subject matter, managing a bill bissett epigraph, a Kafka reference, a prayer, and bodily humour in the first poem, “Colostomy”:

You have lifted the t-shirt

over your sweet head

to reveal your dark bag of faeces, proof

the body is a sequence of routes that men

These are poems of loss and decay, separation and return. There is a restlessness in Ben’s work, subject matter that roams across cities and countries. “A home has lost its home,” he writes in “Redundancies.” For the displacements of these poems, the reader is rewarded with stunning images: “A lake is a body of water plus / the bodies of hundreds of birds” (“Derwentwater”). Ben has seen enough quality work into print in chapbooks and magazines in the last two years to furnish a staggering debut trade collection. Until that happens, Mutt is a welcome addition to his body of work.

Back to My Old Self

Jeff Blackman is one of the hardest working and most underappreciated writers in Ottawa. He has been quietly developing a unique and engaging voice over a series of projects in the last few years. Perhaps, more accurately, he has been developing unique and engaging voices. From his sex-positive work as co-founder and co-editor of The Moose & Pussy, to his devastating Shiva after Shabbas (Horsebroke: Ottawa, 2011), and now Back To My Old Self (Odourless Press: Ottawa, 2011), a series of poems that take on the single greatest video game in the history of video games: Super Mario Bros. 3.

Jeff understands poems—funny poems, sad poems, filthy poems. He knows when to say more, and when to say less:

It helps if you had an older brother

or a best friend who had an older brother

If you grew up with a Nintendo Entertainment System, it would be a tragedy not to own this bizarre and wonderful little set of poems. Jeff turns the struggles of Mario into something nearly heroic, certainly human and frail: “so sing a psalm: everyday I’ll make mistakes tomorrow I’ll make most of them” (“Progress”). These poems have been developing publicly for at least a couple years now at open-mics and readings around Ottawa. Attentive crowds understood that something important was happening each time Jeff read from this manuscript. Following the production of a few of these poems as limited edition handmade broadsides last spring, we have something tangible and more widely available. At last.

Bardia Sinaee is one of the most exciting young poets in Ottawa at the moment. He is one of four hosts of Literary Landscapes on CKCU, a former editor of In/Words, a recent “Hot Ottawa Voice” at the venerable Tree Reading Series, and a damned nice guy. He is also an intensely literate and articulate poet. He understands syllables, metres, sounds. For a young poet, he has a terrifyingly developed vision. He is well read and thoughtful, and deploys all of these characteristics in the service of serious but funny poems in Royal Jelly.

If a circle, C, is inside a triangle, T, then it entails

that C is smaller than T. The value of C would be unable

to hold its end of the equals sign. If the equation

were a gun-draw at dawn, C would lose by a hair

and buckle to its fate. Its lover and children

would mourn by its torn arms and wonder

why its body was built for bullets. (“The Inevitablist”)

Bardia writes rich poems that demand reading and re-reading. One always has the sense that there is more waiting to be drawn out. These are poems of careful construction that nonetheless appear effortless. The rate of Bardia’s development is difficult to measure, but is astonishing to follow.

Behind him, billboards plus peerless paediatrics

and a dated exhibition of bees. Try to find the queen

among all the workers and drones!

Behind that the ground, stapled with hydros,

Odourless is a press to follow, and a welcome presence in Ottawa’s community. What is most striking and refreshing about these first three books is the presence of humour in each poet’s work. Balancing feeling and humour in a poem is an all too rare ability. Ben Ladouceur, Jeff Blackman, and Bardia Sinaee each accomplish this feat with personality to spare. Go buy these poems, for god’s sake! $1.50 for the set! Ottawa, meet Odourless Press. Odourless Press, welcome to Ottawa.