Recently, a student told me she was too scatterbrained to write her novel without help, and that she needed someone to crack the whip, set deadlines, help her focus, etc.  She said she needed an editor or a partner, or both.

This isn't the first time I've heard that sort of thing from writing students. Maybe such people are better suited to journalism, which thrives on deadlines; or writing assigned articles, where the subject matter and the word count are predetermined.  Not easy to get such work these days, of course. I wish I could wave a magic wand and give emerging writers more discipline and focus, or that I had an address book full of the names of editors just waiting to help unpublished writers write their first books, but I can't, and I don't.

What I can do is share some hard truths about writing: 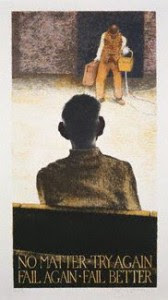 "Fail Better" Samuel Beckett watching "Waiting for Godot," portrait by Tom Phillips (National Portrait Gallery, London)
Still want to write?  Still think it's the path for you?  Good.  Then stop fiddling about on the web and get writing! 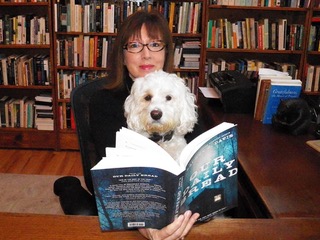 Lauren B. Davis is the author of AGAINST A DARKENING SKY, THE EMPTY ROOM, OUR DAILY BREAD; THE RADIANT CITY; and THE STUBBORN SEASON, as well as two collections of short stories, AN UNREHEARSED DESIRE and RAT MEDICINE & OTHER UNLIKELY CURATIVES.  Her work has been longlisted for the Scotiabank Giller Prize and shortlisted for the Rogers Writers Trust Prize. For more information, please visit her website at: LaurenBDavis.com
Posted by rob mclennan at 10:02 AM 2 comments:

Email ThisBlogThis!Share to TwitterShare to FacebookShare to Pinterest
Labels: Lauren B. Davis, On writing 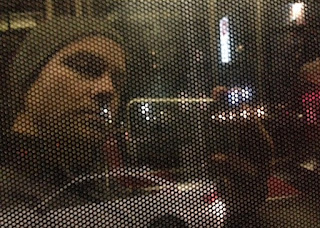