Susan Elmslie, Anne Simpson & Colin Morton in The A B Series

Posted by Max Middle at 4:59 PM No comments: 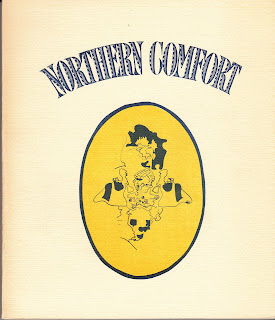 In November 2010, I published a bibliography of William Hawkins through my own Apt. 9 Press. In my brief introductory note, I wrote “this bibliography will likely be out of date upon the day of its publication. I imagine, and I hope, that once it is in people’s hands it will spark new discoveries of “lost” Hawkins work.” Before the folio was formally launched, rob mclennan wrote a review of the Folio that pointed already to further available material. Specifically, he mentions “that magnificent anthology Northern Comfort, the transcript of a reading in the Byward Market hosted by and dedicated to Hawkins.” This note is to discuss and describe that anthology. I intend to return to this space over the coming months and describe further items that have come to light since that initial bibliography was published.

Northern Comfort was published in 1973 by Commoners’ Press (Ottawa). The title page elaborates on the function of the book: “being a reading of poetry by various people, given in the back yard of the Victoria Hotel 18 Murray Street, the Byward Market, Ottawa, on the evening of June 29th, 1972.” The text was transcribed from recordings provided by “Peter Lamb of Coon Hollow Films and Mariea Sparks of Ottawa Living Radio.” It was transcribed by “Monk Besserer” – two streets in downtown Ottawa. 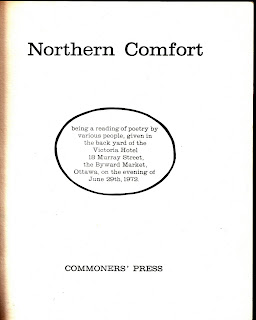 An introduction by Neil Whiteman explains that the reading was organized by Peter Geldart, Alyx Jones and Bill Stevenson. The three were co-ordinators of “Market Projections,” a group of artists who primarily did work “of the “happening” variety.” The reading, or at least the book, is dedicated to the loss of the Victoria Hotel Building (built in 1962 at 18-24 Murray Street) as well as to “MR. WILLIAM HAWKINS.”

The charm of the book lies in its apparent faith to the recording. The transcription includes the speakers, the banter, the introductions, comments from the audience, as well as a generous selection of photos of the event. Hawkins, in addition to reading, hosted the evening.

Hawkins: The whole concept of reading poetry is...is rather a strange one. Uh...it sort of got a renaissance or a start back in, I think, ’58, when all the crazy San Francisco...like...Kerouac and Ginsberg, started reading. But, you know, really, when you get down to it...it...

Hawkins:...it’s a very, very funny thing. It’s somebody talking about what they should feel very personally about and what they should not really want to talk to anybody else about. That’s the way I feel about my poems...and that’s why I don’t read very often. Because...um, they’re private. So I’m gonna start...I got this book you can’t buy at your nearest bookstore...

because...uh...freaks like Whiteman have already put it out of print.

Hawkins reads some of the early poster poems (including “King Kong Goes to Rotterdam,” and “Two Short Ones”) and Ottawa Poems, as well as reading five new poems. In my own reading and research of Hawkins, I’ve not found these poems or lines elsewhere in his published work. (Please contact me if you have!). After several readers, Hawkins returns to the stage and reads “Wilful Murder,” which was printed as new material in The Gift of Space: Selected Poems 1960/70. 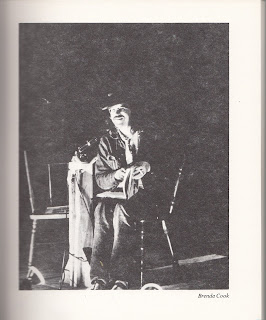 Hawkins' biography modifies his own history: “William Hawkins, 33, lives in Mexico at 182 ½ Dalhousie Street. In 1967 he was voted one of Ottawa’s Finest Young Men.” The reference to Mexico touches on the poems he wrote on a Canada Council Grant in the late sixties and early seventies. The “Finest Young Man” Award was actually an “Outstanding Young Man Award.”

The historical study of literary readings is difficult to undertake. Readings are, by nature, ephemeral. While today we increasingly see detailed audio-visual records maintained by many reading series, it is difficult to reconstruct readings that occurred decades previously. Rather than authoritative texts of events, we have fragmented production and reception histories, primary details, anecdotes, memories and other forms of unreliable evidence. We can find manifestations of audience response and interaction in the wake of events, but we cannot return to the events themselves.

Northern Comfort occupies a unique position in these respects (at least so far as my own reading has turned up). While the text initially appears to offer an unadulterated transcription of the reading in question, numerous editorial comments, as well as an introductory note, make clear that this is a fragment rather than a whole. However, what is most interesting about Northern Comfort is that it was produced in the immediate wake of the reading, rather than at a later date and further distance. It was transcribed and published within one year of the reading. The effect of this, in my opinion, is to create an object that shares the spirit and intent of the initial reading. It is not total narrative, but rather a strange, bizarre, wonderful book-object that mirrors the described strange, bizarre, wonderful reading-event. The fidelity of Northern Comfort is not to the reading, but rather to the spirit of the reading. It is a baffling book but also a “magnificent” one, as rob mclennan described it. It is a nearly-forgotten piece of Ottawa’s literary history that is firmly embedded in the moment it was attempting to describe. 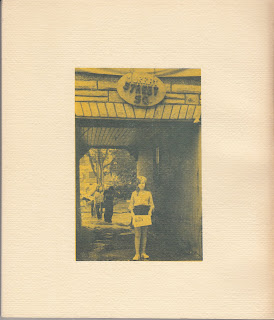 Jen Currin & Jonathan Ball in the A B Series

Coach House Books' most award-nominated authors of 2011 appear in the A B Series, April 16.