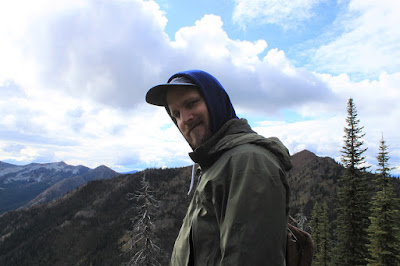 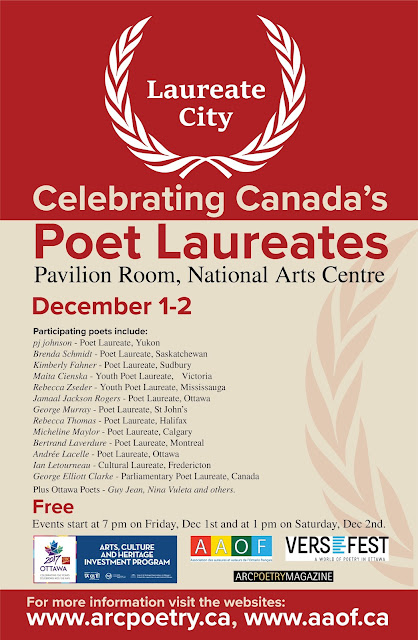 For further information, including schedule, see here.
Posted by rob mclennan at 2:27 PM No comments:


The Poets’ Pathway is asking for new poems about Ottawa, to bring together today’s poets and the poets of yesterday.

·        . Each contestant should enclose a cover page with
§  The poem title (or first line if there is no title)
§  Writer’s name; address; phone number; email address

The poem that inspired the creation of the Poets’ Pathway and its fourteen monuments is Archibald Lampman’s Winter Uplands.

Lampman, who spent much of his time outdoors, became ill writing this poem in the snow and cold. He died ten days later, on February 10, 1899.
He was 37

The frost that stings like fire upon my cheek,
The loneliness of this forsaken ground,
The long white drift upon whose powdered peak
I sit in the great silence as one bound;
The rippled sheet of snow where the wind blew
Across the open fields for miles ahead;
The far-off city towered and roofed in blue
A tender line upon the western red;
The stars that singly, then in flocks appear,
Like jets of silver from the violet dome,
So wonderful, so many and so near,
And then the golden moon to light me home--
The crunching snowshoes and the stinging air,
And silence, frost and beauty everywhere.

Posted by rob mclennan at 2:10 PM No comments:

To whom it may concern
Marci Nelligan

Dear anyone,
I am putting these words together, I am sending them to you, dear someone, in the curve of the oak leaves, where the light dapples into pictograph and memory. What I know of the world comes in at the eyes.  Beech trees, a patch of deer-sucked grass. I am trying to lose my body again,  training my tongue to the filaments of light and root structure.

Dear other,
I am not sure of you. You may/may not ‘get it’. Thin vein of spider thread sinking from the branches.
New moss on the slate rock I drug down that hill.
The shade stalks the sun along the arc of the yard.

Dear who,
Because of the attic stairs. Because of the flour-dusted past, the futility of it all. Because of the yeast in the air and the tenacity of ghosts.
And how, though I try, I cannot describe a single thing the way it is. Cut an improbable channel through the land and reach me here, amid the chaos and bramble, work piled like wood to last three winters,  children a-yawl and a muddle.
It’s just like farming, you’ll say, and someone’s got to eat.

Dear everyone,
Whereas the history of language is sustenance, you have sustained.  Openly, mustn’t admit to the hope in a wing or the manyness of blackbirds, your body breaking into blossom, the plink plink of spring across its foolish meadows, but when we find ourselves beyond the ears of commerce, we confess like new-found catholics.
I admit, it’s crazy. I admit, not a single tax break attends this labor.
Yet the thin mewl of a just-made thing.
Must be some reason in it after all. 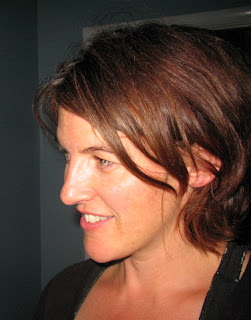 Marci Nelligan is the author of The Ghost Manada (Black Radish, 2016), Infinite Variations (Black Radish, 2011) and numerous chapbooks, and the co-editor of Intersections, an interdisciplinary book on Jane Jacobs. Her work has appeared or is forthcoming in Boog City, Jacket, the Denver Quarterly, The New Orleans Review, How2, Fledgling Rag, and other journals. She lives in Lancaster, PA with her husband and two daughters, and runs an arts-in-education partnership between Millersville University and the Pennsylvania Council on the Arts.

Email ThisBlogThis!Share to TwitterShare to FacebookShare to Pinterest
Labels: Marci Nelligan, On writing

We Who Are About To Die : Rose Knapp 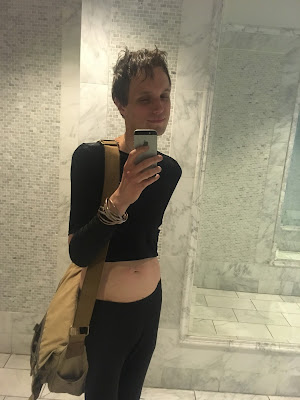 Rose Knapp is a poet, producer, and multimedia artist. She has publications in Lotus-Eater, Bombay Gin, BlazeVOX, Hotel Amerika, Gargoyle, and others. She has a chapbook with Hesterglock Press and a collection forthcoming with Dostoyevsky Wannabe. She lives in Los Angeles. Her work can be found at roseknapp.net

Where are you now?
I'm currently living in the Chinatown district of Los Angeles.

What are you reading?
I'm currently reading The Big Red Book of Modern Chinese Literature, which is an interesting anthology based broadly around themes of China's relationship to Western individualism, and the ever present tensions between poetic expression, propaganda, and Communist party censorship. With all the debate concerning unity/disunity, I'm revisiting some of the Futurists who had Fascist tendencies like Pound, Loy, and Lawrence, and also some of the Surrealists who had Communist tendencies like Breton.

What have you discovered lately?
Having lived in the Midwest and East Coast previously, I've discovered it's interesting to compare the diverse manifestations of what constitutes 'American' across different regions of the country. Sometimes the stereotypes about what each region values as essential hold true, and sometimes they differ.

Where do you write?
I mainly write in my studio, sometimes when walking at night.

What are you working on? Have you anything forthcoming?
I'm currently working on my second full collection, my first is forthcoming with Dostoyevsky Wannabe.

What would you rather be doing?
If I couldn't write poetry I would be creating electronic music, which I also do.

Posted by Ian Whistle at 4:43 PM No comments:

Email ThisBlogThis!Share to TwitterShare to FacebookShare to Pinterest
Labels: Rose Knapp, We Who Are About To Die
Newer Posts Older Posts Home
Subscribe to: Posts (Atom)