THE GOD DUMUZI AND THE POLICE FORCE INSIDE
Christopher Patton

I love teaching Emily Dickinson's thing poems, as Jen Bervin and Marta Werner have compiled them in The Gorgeous Nothings. Though they are penciled in a rough-copy hand on panels of envelope Dickinson salvaged from her correspondence, the scraps can be read as completed object poems, objective poems, in the sense Louis Zukofsky meant when he wrote of the poem as “an object or something that affects the mind as such,” a thing with heft, “tho it may not be harbored as solidity in the crook of an elbow.”

I started making visual poems a few years ago, and soon found myself working postal debris into them. I was scrawling on dismantled junk mail, busting up cancellation marks, enlarging scan codes to find faces and human or not-so-human forms in them. Two things especially entranced me. Simple repetitive patterns, like on the linings of security envelopes. And the way signal and noise gave way to each other under the pressure of distortion techniques I was working out on my scanner.

I see now that my pleasure in pattern for its own sake, there on the signal-noise threshold, was an approach to translation. I was working with the Sumerian myths of Inanna and Dumuzi. Their stories are liturgically redundant, enough so to alter your time-sense, when you’re inside them. And a persistent theme of the poems is the agon, if you like, of form and formlessless.

I was trying, I guess, to use my Brother home-office scanner as a poetry instrument, the way twentieth-century typewriter poets used their Underwoods and Remingtons. And it’s for the best that most of my early efforts slid silently into the waste bin.

What stayed with me after all that early experimentation was the security-envelope lining. Who are the unsung artists of pattern behind these? Late in my work on Dumuzi, my first copies of which have shown up on my doorstep as I draft this paragraph, a manuscript I had stripped down to imagelessness, late into it, one of these linings, and the myriad forms that kept getting born out of it, knocked on the door of the book. They’re what I want to tell you of here.

An email just came from the New York Times comparing the coronavirus to “a microscopic photocopy machine.” Typewriter poetry digs into the uniqueness of each impression the machine makes. A given ‘t’ is not like any other ‘t.’ Every letter, every instance of a letter, has its little haecceity. Compare the laser-printed page, the love song to sameness its marks produce in an air of digital reproduction. When I multiply the scrap’s pattern, each panel is identical, down to the pixel, and that’s convenient, it makes it possible to set them side-by-side in a single unbroken whole.

Everybody has synesthesia, but some people do synesthesia. Most see a face in a power outlet, and many will see Christ in a piece of burnt toast, but only some are fullblown pareidoliacs.

I am one. Human and animal faces and forms leap out at me—from bathroom tiles, from the curtains, from stones, cars, and buildings, from the bark of trees. When I look at the patterned sheet up I made, it’s teeming with a city of nascent forms.

Making images for Dumuzi has just been to draw those images out a few at a time. Technically it’s pretty simple, a practice of data transfer. I use a freeware image editing program called GIMP. That sheet you see above is a base layer, over which I set a transparent layer. I “colour-select” the black in the base layer, in other words the pattern, and then draw in red on my transparency. Areas that aren’t selected underneath can’t receive any colour; no going outside the lines. It’s a sort of digital relief printing process. When the image is done I take the transparency, make it a new file, and turn its red to black. The red is Inanna’s lipstick, danger signal, menstrual blood, harvested from a red Sharpie. Did I mention she’s the goddess of love and war. She won the arts of civilization from her father by getting him drunk and escaped with them by boat to the city of Uruk, her city. Though they’re abstract, in the myth they are tangible objects, shipped cargo.

I’m writing this by voice dictation, and my Apple never mishears “Dumuzi” the same way twice. Do news he. Don’t lose a. Doozy. Demos he. The missing. The museum. I think of Robert Zend’s collaborative global multilingual telephone-game poem “hearsay.” Maybe nothing is interesting other than errors in data transfer. Gregory Bateson: information is a difference that makes a difference. He never actually said that, and that’s a good example of the phenom.

Dumuzi, my sad breakdown hero, comes in several guises. Here he is, or I am, getting his desires and on. That should be, “getting his zazen on.” Working copy up top, final image below.

Here he is bearing the weight of the burning world.

Here he is in the Kur, Sumer’s underworld. He’s on the left, doing jazz hands. On the right, Geshtinanna, faithful selfless sister, who agrees to take Dumuzi’s place, ½ of every year, in hell.

Inanna is a more major power. Some versions of the myth, she rescues Dumuzi from the underworld. Some versions, she sends him to there. Here she is in meditative Ecstasy. Apple thinks I mean the drug.

I love Dustin Anna. No, Geshtinanna. She’s the bodhisattva of the book and probably its true hero. Here, she asks Dumuzi not to recount the dream he wants her to interpret.

And here she is after interrogation by the galla, demons of the underworld seeking Dumuzi to arrest him. They have all the arts of the secret police, or maybe in these days I should say, the not-so-secret police. I want to think people are good. Right now some in uniforms with more power than love would ever give them are testing that faith, though.

And here are the galla in battle array. Because they are my demons, I’ve made them a bit scary, a bit for laughing at. And somewhere back of my mind has been the story of Milarepa.

I’ve made them psychological, you know, monsters under the bed. But they can easily be social too, instruments of the police state, professionally feelingless, having no mothers sons fathers or / sisters, hovering an inch over the earth bright / drought angels pursuant. Think surveillance drone. Think helicopters at roof height over unarmed civilians gathered peacefully in anger.

This is the first one I made, and it’s my favorite.

The text is a short sutra chanted every day in Zen temples and sitting groups and monasteries around the world. A rough translation:

Like the liturgies of Dumuzi and Inanna, or a poem you pick up and hold close, the sutra, and the word is cognate with suture, is what it means, and it does what it describes. 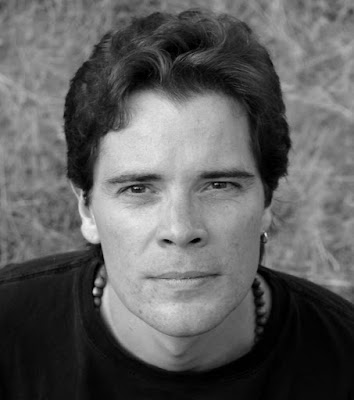 Christopher Patton’s newest book of poetry, Dumuzi, was published in Spring 2020 by Gaspereau Press. His recent book of translations from Old English, Unlikeness is Us, also with Gaspereau, won an American Book Award. His visual poetry has appeared or is forthcoming in Asymptote, DIAGRAM, and Ancient Exchanges, and has been shown at the Whatcom Museum and the Minnesota Center for Book Arts. He teaches, though not for much longer, at Western Washington University, and blogs at theartofcompost.com.