I came to the end of the line

Then, I imagined a line in poetry called the wrack-line

The poems unhinged themselves

They fed other things …

The high tide of the poem – the rhetorical consciousness of self-hood. The lyric I

The cul de sac of the first person

The debris – its linguistic release, the shed skin of parole. The what now, forget, this is what I meant to say, but did not say …

On beaches the wrack line is what the birds, turtles, crabs, shells and worms eat

Unhinge the poem, let it fly

Speaking it, reading, reciting, singing and performing does this

I read once that all language is metaphor

I believed that. On some days, (Sundays) I still do

I once wrote all poetry is performance – it still stands

I think of Maura Soshin O’Halloran

Her sister contacted me. That’s beautiful, she said. That was a blessing

I once spoke with C.D. Wright in her office about poetry. I was a teenager. I asked her so many questions, that when I stopped, she said, well that’s a lot of questions, then she spoke to me about improvisation in poetry

After this, I wrote a poem which was small, and did not try to save the world

None of my poems need to sound like me

There is no me

I constantly misunderstand people. I imagine they do me too

Peter Bichsel’s Ein Tisch ist Ein Tisch has stayed with me for 40 years. The arbitrariness of language – vielleicht

Every poem is an elegy

How does one contain silence in poetry? This is a real question

Poetry is also about one’s relationship to the world vis a vis language, and silence

When I listen to music, I don’t wonder what it means

Poetry is a form of music

Leave meaning to the critics

I love for / look for the leaps between words, the magnetic aura of meaning they attract and repel … it’s a volatile game by which lives are made, saved, and endured … when I say meaning, I mean metaphor, and when I say metaphor, I mean something else

You get the drift ….

This was before the digital revolution

There is a poetry of before and after – I think we’re somewhere in between now, and if I close my eyes I can see on that beach the digital wrack-line - it’s made up of migrants and natives, and the noise sounds something like the waves breaking on that Connemara beach forty plus years ago 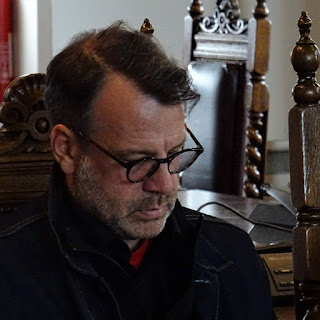 Paul Perry is the author of 5 full length collections of poetry including Gunpowder Valentine: New and Selected Poems and the above/ground press chapbooks The Ghosts of Barnacullia (2019) and BLINDSIGHT (September, 2020). A recent recipient of the Patrick and Katherine Kavanagh Fellowship, he is also a novelist. He directs the creative Writing Programme at UCD in Dublin, Ireland.

Email ThisBlogThis!Share to TwitterShare to FacebookShare to Pinterest
Labels: On writing, Paul Perry