Something sharp I want to make soft

A man and two kids were walking down the sidewalk. They found two large kitchen knives nestled in a crumbling nook of the concrete wall that separates the street from the train-tracks. One of the kids saw first and went to grab them. He grabbed her wrist, as gently as possible. As the children lost interest and pedalled away, the man approached me, sitting on my front porch, and asked, "Do you know why these knives are here?" I didn't. I don't. We agreed we couldn't just leave them there. He set them on my lawn, and I placed them in a plastic bag, then directly in the garbage. Knives in a landfill. Their purpose unknown.

If I had buried them in my garden instead, maybe near the garlic, would microscopic hints of blood have seeded and spread through me while I braided in late summer? I don't know how malice germinates. If garlic flowers, you've let it go too long. A knife in a wall like a premature harvest. Maybe this is to stop destruction from pooling.

So, plant the knives to over-winter then! A butter knife for insubordination. A steak knife to encourage flowers. A bread knife will do nothing but crumble when you try to repot it and won't do better indoors anyway. Leave it alone to sharpen and develop flavor. A paring knife is your best bet for consistent company, so prune then pluck and choose the wall carefully. Someone will touch it. Just wait.

I don't know this knife's intention. I don't know what my poems are trying to say. It's something sharp I want to make soft. To compost and till for sustenance, but I hate to put this pressure on a man-made tool, on a grouping of words. Metal may be forged but it's still elemental. Every once in a while, I choose the right soil mixture — sheep manure, mushroom compost, peat moss, dry leaves. Mixing this with metal makes a memory, cuts a feeling. Maybe there'll be a plant one day. Maybe someone can eat it. Maybe someone will just leave it on a wall near some train tracks, and it will look like a knife again. What else can they really do with it?

When a child finds this, I can grab their wrist, as gently as possible, and take it away. Wrap it in plastic, pretending it's not mine, and trash it. Once in the landfill it will settle beyond me — and a few thousand years from now, the humans that survive our garbage piling society might find it in a wholly different form. Its original components dissected to create something more fertile than I was ever able to. Or better yet, no one will find it. A beetle will roll it into a ball and push it up a hill. A bird will carve a nest from paper. 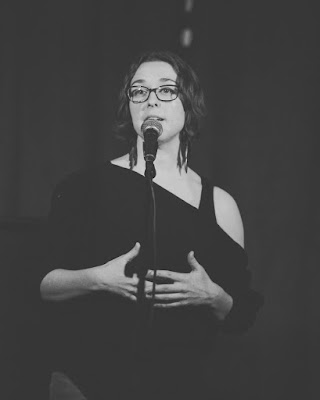 Conyer Clayton is an Ottawa-based artist and gymnastics coach, originally from Louisville, Kentucky. She has 7 chapbooks (one forthcoming with Collusion Books, Fall 2020, in collaboration with Manahil Bandukwala), and 2 albums. She is the winner of Arc's 2017 Diana Brebner Prize and The Capilano Review's 2019 Robin Blaser Poetry Contest, and writes reviews for Canthius. Her debut full-length collection of poetry is We Shed Our Skin Like Dynamite (Guernica Editions, 2020). Stay updated on her endeavours at conyerclayton.com.
Posted by rob mclennan at 10:00 AM