Talking Poetics: a poem for my neighbor

In talking generally about poetics, I thought I’d start with some specifics. I wanted to write a poem for my neighbor, Henri. I don’t really know her, and I’m not really sure which house is hers, but I do know that she lives down the street and admires our plants and sometimes requests to take some of our white sage. In return she offers us fresh pecans from her tree. It’s all very charming.

A few weeks ago, in late May or early June, she got some sage. And she dropped off a box of pecans for us and a thank you note. I liked the pattern on the card, and I made a little poem-weaving from it:

While I was weaving, I thought about how I would like to write a poem about Henri and the sage.

Like all my poems, I drafted this one by hand, in the spiral-bound notebook I use to draft poems and notes in. I almost always draft my poems in a prose block—when I’m just trying to get words and ideas on the page, I don’t want to be burdened by thinking about line breaks, too. Also, my spelling and my handwriting is really terrible in these first drafts. In my notebooks, I try not to overthink or to censor myself, so everything tends to look really messy.

Then, I let this draft sit for a few days. My tendency is to draft a lot, and then go back and read and type up and form some sort of poem out of my handwritten mess a few days or a week or a month later. I started this draft at the end of June, as I was finishing up a month of drafting poems daily for the Grind (an email writing group run by Ross White/Bull City Press). Since I was in need of more poem-material, I went back to my notebook to try to make a poem out of this draft about Henri a little sooner than usual.

To poem-ize this messy draft, I typed up the words I could decipher from my notebook in paragraph form. Then, I copied and pasted and deleted and changed and re-arranged these words in different ways, until I had drafted the poem “Neighborly.” Because I was on deadline for the Grind, I sent that draft poem out to my group that night.

An unusual thing about “Neighborly” is that I also shared this draft the next day with a different group during a poetry workshop on Zoom. I’d joined a writing group with three other poets where we’d share and discuss poem drafts on Zoom every morning for a week. Since this was the week I was working on “Neighborly,” more eyes than usual got to see my poem for Henri, and I also got some useful suggestions about what was working well in the poem and what might be changed. Talking with my friends, I wrote notes in purple pen on my poem draft, which I’d printed out in advance of our Zoom chat. After our Zoom meeting, I put my marked-up poem on top of the big pile of poem drafts on my desk.

Meanwhile, on Facebook, poet and publisher Eileen Tabios mentioned that someone had donated a number of tiny blank books for her miniature library project and she’d like their pages to be filled. Of course, I volunteered. In a few days a green book, about 1x1.5”, arrived from Eileen. I didn’t really know what I’d put inside. A poem of some sort, I thought. I counted the pages in the tiny green book (~80), and I leafed through my pile of printed-out poems on my desk to see if anything might match.

“Neighborly” stood out to me, maybe because the vivid green cover of the tiny book was evocative of summer leaves. Also, I realized that the words in this poem evoked but didn’t fully describe the action that the poem was about. There are “scissors” and “clippings” and a “sidewalk” in the poem, but no mention of plants or sage or the neighborhood.

“Neighborly” is less than 20 lines long, but since the book has 80 very small pages, I also knew that if I wanted to make a single poem into a book I’d have some choices to make: I decided to include only 1-3 words on each page, and to use a blank page to indicate the pause of what would otherwise be a line break. And, I wanted to make plants more prominent. I briefly considered cutting some sage and other leaves from my yard, pressing and drying, and adding these to the book. But that’s not the kind of work I have patience for! Instead, I browsed my recently received issue of Martha Stewart Living for pictures of foliage and flowers. Martha Stewart didn’t offer any sage, but I did find an advertisement for peachy-orange Floribunda roses, and this color looked amazing with the neon-y green cover of my tiny book. I cut out rectangles of these roses, along with some succulents, and pasted them in my tiny book, punctuating the lines of my poem.

The effect of reading this completed tiny book “Neighborly” is, I hope, one that evokes the movement of a garden through the combination of its language and images.

Pasting the words and images of “Neighborly” into the tiny book gave me a chance to reflect and really examine my word choice. When you’re printing out and pasting 1-3 words at a time, you really start to notice your choices! I was going to say that this—printing out lines or words from a poem and arranging them into a book form—was also an unusual part of my drafting process of “Neighborly,” but it’s really not. I often sew, fold, or weave bits of words together as I’m working on a poem since I find that physical action of dealing with words helps me to meditate on and re-think the directions a poem might take. In this case, I noticed some useful repetitions and also pared down some language through this process of re-thinking its form and fitting it into the tiny book.

I also became very aware that my poem “Neighborly” doesn’t actually evoke the generous feelings I have toward Henri and her enjoyment of our sage. Aside from being happy to share our sage and appreciating the gift of local fresh pecans, knowing that someone local admires our generally rather wild-looking front yard of native plants makes me feel more like I fit in my rather conservative suburban neighborhood. This—this sort of feeling of belonging—is initially what I set out to write about. But instead “Neighborly” became more about examining moments of looking and looking away.  And I like how the poem evolved into something that surprised me. So I will keep trying to write the poem for Henri. I haven’t yet been able to capture the mood I’m going for, but I’ve been scrawling lines in my notebook, and its pages are filling with words about leaves, the scent of cut sage, the contrasts between the sound of car engines and busses revving down the street, the quasi-oasis of my front yard, and the well-mown bright lawns on either side. 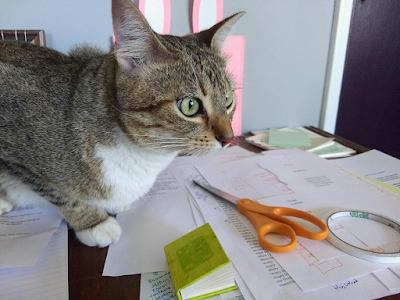 Genevieve Kaplan is the author of (aviary) (Veliz Books, 2020); In the ice house (Red Hen Press, 2011), winner of the A Room of Her Own Foundation‘s poetry publication prize; and three chapbooks: Inan aviary (Grey Book Press, 2016), travelogue (Dancing Girl, 2016), and settings for these scenes (Convulsive Editions, 2013). Her poems can be found in Third Coast, Spillway, Denver Quarterly, South Dakota Review, Poetry Magazine, and other journals. Genevieve edits the Toad Press International chapbook series, publishing contemporary translations of poetry and prose. She lives in southern California.
Posted by rob mclennan at 10:00 AM