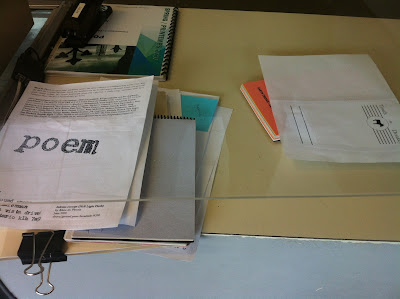 above/ground press hosted its first launch on July 9, 1993 in a café that no longer exists, in a building that no longer stands, on Ottawa’s Lisgar Street. Over twenty-seven years, above/ground press has produced more than one thousand items, including more than four hundred single-author poetry chapbooks, and currently also produces the quarterly Touch the Donkey [a small poetry journal], the occasional Peter F. Yacht Club and G U E S T [a journal of guest editors], as well as the new online journal periodicities:a journal of poetry and poetics.

Born in Ottawa, Canada’s glorious capital city, rob mclennan currently lives in Ottawa, where he is home full-time with the two wee girls he shares with Christine McNair. The author of more than thirty trade books of poetry, fiction and non-fiction, he won the John Newlove Poetry Award in 2010, the Council for the Arts in Ottawa Mid-Career Award in 2014, and was longlisted for the CBC Poetry Prize in 2012 and 2017. In March, 2016, he was inducted into the VERSe Ottawa Hall of Honour. His most recent poetry titles include A halt, which is empty (Mansfield Press, 2019) and Life sentence, (Spuyten Duyvil, 2019). He co-founded the ottawa small press book fair in fall 1994 with James Spyker, and has run the fair solo twice a year since.

I started self-producing chapbooks in 1992, realizing that there wasn’t anyone as excited to produce my work as I was. I had officially founded above/ground by the following summer, after realizing how relatively easy it was to produce chapbooks, and seeing the poets in my immediate vicinity that I thought were doing interesting work. Moving through the shelves in the library at the University of Ottawa, I saw small and micro press as something exciting and engaging, although entirely historical. I didn’t see much in the way of publishing around me, so I started above/ground press to produce chapbooks, as well as the chapbook-sized long poem journal, STANZAS, a journal I distributed gratis, with some forty-five issues produced from 1993 to 2006. Early above/ground press authors included David Collins, Tamara Fairchild and Joe Blades.

I have, obviously, been at every one! The shifts have been interesting over the years, although I’ve found the fair as an experience has been consistently good for at least eighteen years, if not more. It took a couple of years for audience to figure out we existed, and what we were actually doing. What I also really like is seeing the same exhibitors, year after year, as well as new exhibitors emerging, and seeing what the new publications are. There’s such an incredible wealth of material being produced that I can barely keep up.

I’m not sure I would have made anything specific for the fair that I haven’t simply produced during lock-down. I had been hoping to launch the Michael e. Casteels collaboration at the pre-fair event (as we had discussed that as a possibility), but I still produced the chapbook in the same way I would have.

The bulk of my sales come through subscriptions and mail order, so that hasn’t changed. I still have a certain amount of sales through small press fairs, so I am missing that, as well as the human element. I’ve long known that there are certain times that purchases are more likely in person than online, so there are some opportunities being lost through this, but we’ll get there eventually. I am disappointed to not be able to hold my annual anniversary event this year, given the previous have been so wonderfully attended by both writers and audience (over the past few years, I’ve been ridiculous enough to attempt to launch ten new titles per anniversary event), but there’s not a whole lot I can do about that. I’ve wondered about ways to hold an alternate to the in-person anniversary reading for lock-down, but haven’t quite come up with the right kind of idea, yet. 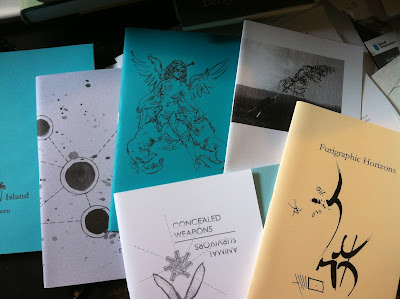 Back in March, I started working on a ‘virtual reading series’ over at periodicities: a journal of poetry and poetics, posting short videos online of a variety of poets reading from their work, but nothing specifically for above/ground. It has been fun to see the reactions to the videos, as well as seeing the videos themselves, part of which has allowed me to actually see and hear certain poets I’ve known for years for the first time. I’ve participated in a ZOOM reading, and even watched a couple, including one Christine McNair participated in recently, but not much more than that. I like that they exist, but I tend to get distracted by the evenings, and tend to want to nest. The bulk of my outreach interactions, instead, have been through Canada Post.

When the original lock-down first hit, I lost access to all of my print options, but had, fortunately, already produced a couple of items I hadn’t yet announced. I did have to make a cover for the April 2020 issue of Touch the Donkey with materials I had already on-hand, which I felt pretty lucky about. I mean, even having enough materials to be able to fake a cover. I also had to learn how to send print orders through the Staples.ca online system for two different issues of G U E S T (although designed by Christine McNair and natalie hanna, respectively), which I didn’t care for in the least. Once the stores opened up a bit, I worked to produce as much material as possible for eventual release, in case lock-downs might resume. Back in June, I produced so much material that I haven’t yet managed to fold and staple all of them, including chapbook set for July, August and September release, and the October 2020 issue of Touch the Donkey. I’m thinking that if we’ve a further wave, I want to be prepared with publications already on-hand (with the presumption that Canada Post will remain as an option for sending out author packages and subscription envelopes). Who knows what might happen next?

Oh, I’ve been ridiculously busy, with new chapbooks over the past few weeks by Rose Maloukis, Sarah Burgoyne, Buck Downs, kevin mcpherson eckhoff, orchid tierney, Derek Beaulieu, Julia Drescher, Misha Solomon, Dani Spinosa and Andrew Cantrell as well as an issue of Touch the Donkey. Copies can be ordered through the direct links to their publications (there’s a whole sidebar of links to names on the site, which provide access to each author’s most recent above/ground press publication), or through sending me an email: rob_mclennan (at) hotmail.com

I’d love to receive further videos in the ‘virtual reading series,’ and am working on upcoming issues of Touch the Donkey (I usually work to be three to four issues ahead) and monthly content at periodicities: a journal of poetry and poetics. For above/ground specifically, I’m working on new chapbooks by Zane Koss, Jérôme Melançon, Kemeny Babineau, Sarah Burgoyne (a collaboration with her mother) and a further by Julia Drescher, as well as the next issue of G U E S T, which was guest-edited by Jim Johnstone. Further issues down the line will be edited by Karen Schindler and Michael Sikkema (see his call for submissions on such here). I’ve already produced a second chapbook by Dublin poet Paul Perry, with a September release date, just so he can receive his contributor copies around the same time the book might be announced (it takes six to eight weeks for packages to head overseas).