I am obsessed with order and so I don’t think I’ve written a poem without starting with a title. In the affirmative: I always start with a title. That title is usually reflective of a “thesis statement,” but working to support a thesis often results in poems that have a lot to prove and not much to say. And so the work, for me, is in moving away from gathering evidence to support a preordained thesis and toward putting together words that express something, either through their form or meaning, about a subject or concept suggested by the title.

This “work” happens mostly in my head. I write down the title, in a notebook or a Pages document, and then I stare at it while I break down the very thesis-y and unpretty thoughts into more natural and, hopefully, pretty words and phrases. By the time I start writing or typing words under the title, I usually have a good sense of the first half of the poem.

Then I get to my midpoint, which is the midpoint for no reason other than I have gotten to it. Usually the midpoint doesn’t really end up being the middle. At that point I continue in dribs and drabs, but always in one relatively uninterrupted writing session, always fighting the urge to return to the thesis model.

For instance, in this poem, “Chunnel,” I was sitting in a train moving through the Chunnel and I liked that word as a title and I had seen a boy yawning and had lots of thoughts about the ways in which children and adults yawn, and so I put something resembling this down in my notebook:

a stranger looks like a boy but yawns like a man
children yawn freely
little lions roaring at their tiredness
he shows restraint
jaw tense, cheeks taut
ashamed of his fatigue

From there, I had lots of repetitive ideas and example to support my “claim” about The Differences Between the Yawns of Human Children and the Yawns of Human Adults, and I likely became frustrated that none of these ideas translated themselves elegantly into poetry. But, because my commitment to order requires completion, I continued to stare at the page until I pivoted into memory:

And then ran with the memory and the fish into the present and abstraction:

now, fish surround me
one raises the armrest between our seats
and leans its head on my shoulder
I’m not sure I’m moist enough
to keep its gills from drying up

At this point I felt that I could reward myself for moving far enough away from my initial thesis by returning to it, but through the self-reflective lens I had established in the second stanza:

I’m tired too
but my jaw clicks
and my cheeks

This poem happens to end mid-thought, which is a good way of stopping myself from leaning too hard into a formal, evidence-based conclusion. 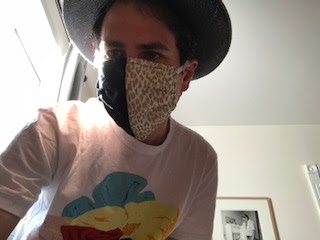 Misha Solomon (he/him) is a queer poet in Tiohtià:ke/Montréal. His first chapbook, Florals, was published by above/ground press in 2020.