From Black & White to Colour, from isolation to collaboration: 1 poem in five iterations

Process and surprise. Much of my writing is based on process (the act of working through what I means to write, the act of creating with specific media) and surprise (working without expectation of the final creation, allowing for the media itself to swerve me away from any goals I may have designed). I want writing to be in a conversation with my expectations, limitations or constraints I may have, the restrictions of media and, eventually, with a community or readers and writers. As dry-transfer lettering ages, it cracks and ripples, becoming less pliable. Letters no longer adhere to surfaces faithfully; they flake and crumble, crack and crumble. These poems reflect that lack of cohesion; the letters crumble away from meaning, leaving rough traces of what could have been meant.

In 2018 I created a sequence of visual poems which were made solely from the parts of letters, the tattered remains of what was still on mostly-used sheets of Letraset; an exploration of how much could I say, how captivated could I be with only the suggestions: the curves, ascenders and bowls of letters long since used or flaked away. The resultant pieces were published in Simulacrum Press’s Fragmentum which remains in print, a small print run of 55 copies.

In many different essays I have suggested that Concrete poetry should shine and shimmer like the street-signs and broken neon of Las Vegas’s Neon Museum or like the famous signs of Toyko’s nightlife … and yet, mine didn’t. They were black vinyl lettering on white pages.

With Aperture (Penteract press, 2018) I entered into a conversation with Anthony Etherin and Clara Daneri who listened to my desire to have the poems be re-published in day-glo, high-contrast colours, driving the conversation more and more towards my daydream streetscapes. The resulting book, published on glossy paper, began to push my thinking on poetry further into graphic design, seeing the compositional field (page) as a place for colour, foreground/background play which surprised and enticed me.

With Aperture’s publication – both in print and as a free downloadable PDF I released these poems into a larger conversation; the conversation of readers and writers. Shortly after the publication of Aperture, UK-based visual poet CDN Warren did just that. He visually sifted and remixed a suite of poems from that book  into “Vent (8 Abominations for Derek Beaulieu)” re-presenting my own writing back to me in ways which surprised and inspired – I had become a new reader of my own writing.

Michael Orr then remixed Warren’s creation and posted his response to the internet as well – the piece was moving further and further away from any intention I may have had into a multi-authored conversation suggesting shimmering stained glass windows. This is precisely why I post all my work online as PDFs: to enable conversation and let artwork thrive in a space of collaboration, permissiveness and surprise.

Lastly (for now?), Lens Flare, as forthcoming from UK’s Guillemot Press, is a page-by-page reply to Aperture, wherein Calgary-based visual artist Rhys Farrell has digitally responded to the disintegrating logos and letterforms, the crumbling vocabulary of suggestion and memory. Farrell is known for his panels of throbbing colour, his huge murals (which fill suburban malls and coat entire city blocks) and for his internationally acclaimed exhibitions. I invited Rhys to transform the pages of Aperture in any way he wished. What resulted was 1970’s inflected landscapes of urban murals and playful geometrics. The poems have transformed from still-lives of disintegrated neon into obscured logos in an op-art scene awash in graffiti, immersed in a day-glo discotheque.

I draw a lot of inspiration from Margaret Avison’s dictum that “the best response to a poem is another poem” and welcome writers and readers to write back, to remix, recreate and respond to my writing – I can’t imagine a better feeling than knowing that my writing has inspired someone else to create and explore as well, to feel welcome to be a writer themselves. 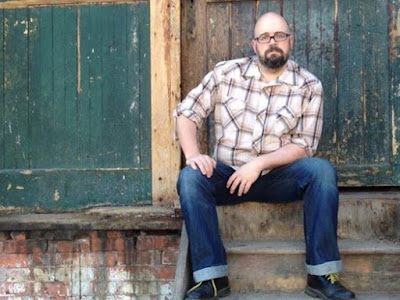 Derek Beaulieu is the author/editor of over twenty collections of poetry, prose, and criticism, including two volumes of his selected work, Please, No More Poetry (2013) and Konzeptuelle Arbeiten (2017). His most recent volume of fiction, a, A Novel was published by Paris’s Jean Boîte Editions, and he recently published CABARET with above/ground press. Beaulieu has exhibited his visual work across Canada, the United States, and Europe and has won multiple local and national awards for his teaching and dedication to students. Derek Beaulieu holds a PhD in Creative Writing from Roehampton University and is the Director of Literary Arts at Banff Centre for Arts and Creativity. He can be found online at https://derekbeaulieu.wordpress.com/