Bending History to the Poetic Page

My book Building on River represented a change for me— having a broad, roughly defined framework within which to craft individual poems. My subject, J. R. Booth, lumber king of the Ottawa Valley, had intrigued me in occasional short pieces I read about him, and more so the more I read. I debated the ethics of an imagined picture of a real person, but felt it defensible as long as the work was so labeled.
I wanted to learn viscerally about Booth and his times— not just names and dates, but textures, sounds and smells of his era— to allow poetry to do what it does best, evoke feeling through senses. Because Booth left no correspondence to speak of (I did come across a letter informing the Department of Marine and Fisheries that one of his steam vessels had been taken out of service— not much psychological insight there), most of his private life was left to my imagination. And a study of “peripheral history.” Photographs showed the pride and confidence of lumber camp workers. Even Booth’s stiff Victorian “captain of industry” photo revealed a sensuous mouth. Charlotte Gray’s Sisters in the Wilderness, although about different people in a slightly different time and place, gave me a sense-image of rural travel in the era of Booth’s youth, which sparked  poems. Newspapers of the time (though threatening blindness from the library’s microfilm readers) exposed me to early attitudes and vocabulary and sometimes telling details: an ad for reduced-price bunting at the time of a royal visit, an ad for a large downtown house that vaunted running water in the kitchen. For one of the poems in the book, I needed to know what a workman would wear as underwear. Enter the book, How to be a Victorian, based on a British TV series, and stuffed with relevant information. Looking for mid-1800s treatments for scarlet fever, I stumbled across answers in a blog prepared by a writer of historical romances. A You-Tube video showed how to make shingles by hand.
Poetry, for me, is about fresh language and unfamiliar images. History is full of both. I found myself relishing the language around logging (its trades of timber cruiser, swamper, rosser, and more; its tools such as pike pole and crazy wheel.)  I relished the language so much that various workshop commenters had to drag me back from overindulgence.
Each poem came about as poems do, from an imagined moment, a mood, an image, a phrase that pops into mind. But there was also a guiding hand. After I’d written perhaps 15-20 poems, I listed them in a possible order for a book. That revealed gaps, and sent me to research new aspects of Booth’s career. Research invariably presented me with new poetry prompts. There were also facts in Booth’s life that I knew had emotional resonance (the deaths of children, his father, and his wife) and I hoped the reader would experience those moments.
I wanted to vary the poems’ voices beyond “the poet” or Booth himself. I imagined who might offer an interesting perspective. His wife? A forest worker? A mill hand or tavern habitué? Visiting royalty? Voice chosen, it was a question of finding a tone, a taste of the period language, and appropriate diction. A huge book I found on the forest industry from coast to coast helped, with hundreds of first-person accounts and famous songs and tall tales.
Various technical challenges shaped the work. One was conveying enough information without overloading the poem with facts (a constant temptation for me!) Several poems made use of the traditional Victorian long-winded title. In others, an epigraph from the era provided information plus flavour. For an extended work, I wanted to avoid the dullness of one left-aligned free verse after another. So I tried a villanelle, a pantoum, a palindrome poem, where it seemed to me that the form would enhance to the poem’s impact. The roughly chronological arrangement of the work helped address the challenge of creating narrative continuity in a discontinuous form. I also played with line breaks. In one poem, evoking Booth as a young fellow splitting wood, variations in breaks around the phrase “the wood splits clean” embodied his decision to leave home.
I found this first exploration of an integrated project rewarding. I was able to delve into a different world for a prolonged period, and gain an in-depth feeling for what the times were like. Having that world to return to made new poems easier than starting completely afresh. I missed both Booth and his times when I was done. 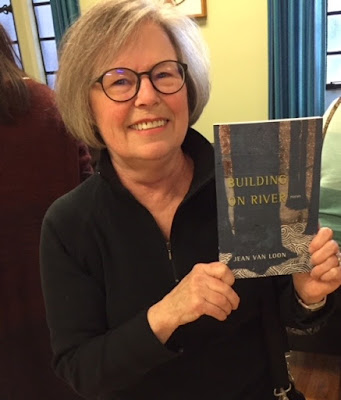 Jean Van Loon’s collection, Building on River (Cormorant Books, 2018) was shortlisted for the Ottawa Book Prize. Her stories, poems, and reviews have appeared in literary magazines and in Journey Prize Stories.