In the lyric many echoes fill the space and everyone is a speaker and a listener, which is to say a witness, as in this I bears witness on the body like a heavy weight, and all of the I’s are being burdened, and the exhalation of air in the shape of letters generates an atmosphere in which all of the I’s can go on speaking and listening and bearing their witness.

In the writing of the lyric there’s the pointer, and the pointing, and the being-pointed-at. And the pointer stands across from the being-pointed-at, in a field of other pointers and being-pointed-ats, and the pointing is a sign. It’s a sign like a letter with other letters and a sign like a billboard is a sign. Sometimes it’s a sign that says DON’T LET ME BE LONELY and sometimes it’s a sign that says BUT I AM VAST WHEN ALL IS POUNDING SLAUGHTER WITHIN US.
And it’s a sign that comes from a gesture, the moving towards the sign, which doesn’t exist without the gesture. And the gesture that becomes a sign is from the I that is both made by and makes the moving toward the sign. So there’s the pointer, an I, who is moving towards a sign through gesture, who is being made an I in the gesturing, and in the arrival of the sign. And the arrival of the sign is the pointing, which was a gesture but is now a sign, which is an image. It was a video and now it’s an image.
So the I is an imagining image, is imaging that which is being pointed at, and the act of pointing is the imagination. In which case the imagination is what makes the I an I. I am an I in utterance. I say, “I say,” and the saying is both an I saying I say and the creation of the I, which is a speaking being speaking itself into being. But then we’re just talking to ourselves.
But then also the being-pointed-at is another I saying I say. We say I say back and forth and that is called recognition. It’s an I saying I say to another I saying I say and that is called love. It’s an I saying I hear to an I saying me too and that is called poetry. Really it’s only a lyric poem if an I is talking and another I is talking and all the I’s are talking and the first I is listening and the second I is listening and all of the I’s are listening and that is called a community.
The lyric I is just a lyric We that forgot about its others.
Notes:
“Don’t let me be lonely” is from Claudia Rankine’s Don’t Let Me Be Lonely
“But I am vast when all is pounding slaughter within us” is from Nicole Brossard’s Ardour, translated by Angela Carr 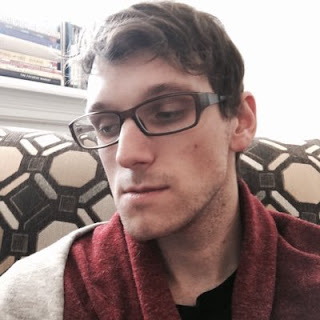 Travis Sharp is a teacher, writer, and book artist living in Buffalo. A chapbook, Sinister Queer Agenda, is forthcoming from above/ground press in 2018, and he co-edited Radio: 11.8.16 (Essay Press, 2017) with Aimee Harrison and Maria Anderson. He's an editor and designer at Essay Press and a PhD student in the Poetics Program at SUNY Buffalo. Poems and essays have appeared in Columbia Poetry Review, The Bombay Gin, The Operating System, LIT, Puerto del Sol, Big Lucks, Entropy, and in other things and places.
Posted by rob mclennan at 10:02 AM

Email ThisBlogThis!Share to TwitterShare to FacebookShare to Pinterest
Labels: On writing, Travis Sharp