Poetry as the ultimate language


As a french poet I find it exotic to explain my own creative process in another language; it’s like expressing myself on different psychic levels. When I used to live in London I remember feeling a total freedom in speaking english. I used to live at the home of Olwyn Hughes, Ted Hughes's sister, who was also the editor of Sylvia Plath. Olwyn was a close friend of my dear father (he died in 1981) in the sixties, Olwyn was the sort of an auntie who helped me dealing with relationship issues using through her astrology skills (as she did for Plath and Ted Hughes, she was an expert). She encouraged me to write and read all my manuscripts in French. Reading Plath in English in Olwyn's attic made me also see how much languages can bring different perceptions to art and life.

Actually, the ultimate language for me became poetry (and music to a certain extent), a real language as a laboratory of my own perceptions, not the daily language made with social  and mental codes but a way to recycle and work with those social stereotypes, reconsidered as issues I could use them as creative material.

I started writing because I had nothing stable in my life, although I was brought up in a intellectual and hippie family. I was a teenager when my dad died; I could only rely on myself. I always felt different from other people and this dramatic event made my life even more out of the ordinary. First, I trained to be an actress (played in few short films) and was a singer (making a few records in the UK), I also started learning sculpture. But I was looking for something that I could express instantly and not depend on anybody else. While writing, I could explore my own creativity and maybe other people who read me would end up allowing themselves to explore their own paths. When I taught creative writing in underprivileged high schools I wanted to pass this message: expressing yourself through experimental writing will be a good way of being an activist in your own life. It's exactly the meaning of art. And this is how I always felt with my own creativity and experimental writing.

When I was 30 years old, I was awarded with the Villa Médicis prize in Rome, I could suddenly make money with my art, and this was like the word telling me you really are a poet now, I felt I was allowed to write, to make art. On the other hand, I needed to be surrounded by “underground” people and artists, in 1997, I decided to move to London and left Paris. I had already made music, vocals, with indie bands like The Wolfgang press from the label 4AD and few Electro bands and DJ’s. Music and poetry were quite separated in France at the time and didn’t seem to be connected at all. Now I use my vocals and music when I perform my poetry. Being a sound and vocal artist as well as a poet is different from being a singer who makes songs, different from being a sound poet who doesn’t sing. It’s more like an hypnotic experience for the audience. Singing during my readings is exactly like making the sound track of my own “mental-film”.  Nevertheless my books have their own life, my albums as well. I often include my music in my books (a CD attached inside) the text is always central.

In pop culture, music and visual art seemed to touch more people than poetry, but this is also what I love about writing poetry, there is no space for mainstream approach, I don’t have to fit in a casual model. But it also includes visual and sound art. In my writing I experiment and explore all forms. I can use pop culture, as I did when writing on Cindy Sherman photos, David Lynch or Harmony Korine’s films, the iconic pop stars Britney Spears, or the iconic poet Emily Dickinson. This freedom is precious.
My poetry is mainly linked to my own life and what I observe from the inside:  family issues, hidden traumas, social rules and façades, sensations of “deja-vu”. In my art and own life I try to break social codes and stereotypes. I need to express what happens behind the norms and “sunny” people, and usually it's pretty dark. That's what  Sunny Girls is about (Poésie/Flammarion 2015), cinematographic and fairy tale atmospheres driving to hypnosis and transe. My new book Colloque des Télépathes (Editions de l’Attente 2017) is about the Fox sisters who invented ouija boards and spiritism, with the gothic and victorian atmosphere of paranormal phenomenon, linked to the Californian dream and it's cinematic approach (in films like “Mulholland Drive”). “Post-Gradiva” my last album (CD) is included in “Colloque des télépathes” as a sound track experience with mental and sound images involving an hypnotic atmosphere. In Sunny girls I wrote on films like  “Zabriskie Point” and “Spring Breakers”, and I’ ve actually been invited to read and perform pieces of Sunny Girls at the Centre Pompidou, in Paris, in relation to Harmony Korine’s retrospective.

Now, I'm working on a new poetry book based on love and sex, questioning stereotypes in our capitalistic society and the conventional approach of what society and fairy tales try to impose as "norms” in term of couple, sex and family. There is a political approach in my work, as a woman, a single mother and artist. What could be “true love” in a society based on fears as well as the social image of a fake self. The spiritual and physiological experience of love and sex in a non conventional approach. Exploring all those issues in my poetry is also for me a way to create my own life. 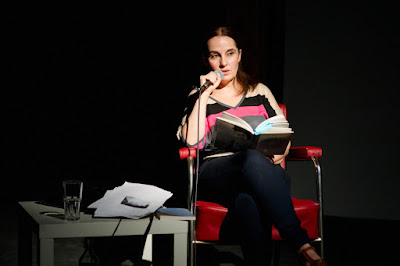 Sandra Moussempès was born in Paris in 1965. She writes primarily in fragments that trouble stereotypes, particularly those surrounding femininity, by creating linguistic environments rich with anxiety, cinematic beauty, and déjà vu. Moussempès is a former resident of the Villa Médicis and she has published ten books with publishers including Poésie/Flammarion, Éditions de l’Attente, and Fourbis, as well as a bilingual Chapbook at Abovegroundpress in Canada. Also a vocal and sound artist, as well as a photographer, Moussempès infuses her poetry with her sensitivity to auditory and visual affect.  She reads and perform her poetry (using sometimes a vocal and sound device) in various places  including festivals and Modern Art Museums : Fondation Louis Vuitton in Paris, Musée du Carré d'Art in Nîmes, MAMCO in Geneva, Kunsthalle Mulhouse, Centre Pompidou in Paris etc.. As a sound artist, she uses her vocals in her poetry reading and colaborates with other artists/musician,  such as  DJ/Producer Black Sifichi on her last Album “Post-Gradiva” CD included in her new book "Colloque des télépathes & CD Post-Gradiva" (Editions de l’Attente, 2017)

Email ThisBlogThis!Share to TwitterShare to FacebookShare to Pinterest
Labels: On writing, Sandra Moussempès