“To speak is almost to say I know. But in most cases, artists are speaking about things they don’t know or are still in the process of knowing.” – visual artist Hank Willis Thomas, in Who Reads Poetry: Fifty Views from Poetry Magazine (University of Chicago Press, 2017)

Last night, I opened the file labelled DEAD POEMS.
It was a sleepy evening. My partner lay on the bed staring at his phone. I’d just finished a novel (An Advent Calendar, Shena McKay), and to start another so quickly felt greedy and disloyal. I did not have the desire to invent anything new, from scratch – from lightning and primordial ooze.
The file contained poems I’d run at many times, deleting, adding, moving ink around, but all I’d really done was shovel dirt on the initial spark. I’d given up on the poems years ago.  What a surprise, then – the moon was not full, the stars stood in their usual unaligned mess – when the poems shuffled their stiff limbs out of the way and let me in.
For the last few years, I have been editing professionally, for other writers, for a publishing house, for a government website, and, currently, for Hansard, the transcript of debate in parliament (in my case, the B.C. Legislature).
Though I sometimes consider my Hansard job glorified stenography rather than editing, I like it. We turn the oral into the written, via the keyboard, preserving each politician’s idiolect – his or her unique way of wielding language. Punctuation is our “first line of defence”, with which we corral, tack down and usher through. Sometimes we permit a comma splice or run-on sentence, because they are closer to the truth.
The Hansard editor’s aim is to be invisible, as hands-off as possible. At peak production, 24 editors produce 16,000 perfect words in an hour, and the entire script should appear as if recorded by the same hand (the Style Guide is a behemoth). What I’ve learned is that speech is character, and editing is less about control than mirroring, creating a genuine likeness.
As well as working as an editor for the last few years, I’ve been parenting teenagers. “You are being fired as their manager,” a parenting guru told me. “Your hope is to be re-hired as a consultant.” The work here, too, is about letting go, and guiding invisibly.  A light touch and a whole lot of trust. Seeing the other for who they are, and not what I want them to be.
I worked at the dead poems with a strange passivity. I think it was receptiveness. As I worked, I observed that the greater part of typing is moving fingers over the keyboard, rather than pressing keys.
Shazam. Several dead poems revived. They said what they’d been meaning to say; I heard them for the first time.
After an hour, my partner put down his phone and asked how things were going. “Great!” I said, falling onto him. I felt light. It was as if I’d crossed a long bridge that had been thick with fog. I was out of the fog and on a new, clear bank.
When I used to sit down to write, I’d put on a cloak of confidence, authoritativeness. I’d clear my throat: “This is what I want to say.”
Now, instead, quiet as a prayer, I’ll whisper, to myself and reader, as if one and the same: “You know this.”
Then I’ll wait to see what we know. 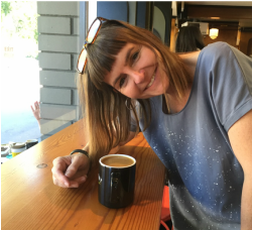 Sara Cassidy revives poems in Victoria, B.C. She is trying to quit writing children's books and get back to writing plays and fiction for adults.

Email ThisBlogThis!Share to TwitterShare to FacebookShare to Pinterest
Labels: On writing, Sara Cassidy

Really enjoyed this. Thanks.

I'm currently taking an online course aimed at polishing poems, so this really struck a chord with me today. Hoping my own dead poems still have sparks ready to ignite!