We Who Are About To Die : William Allegrezza 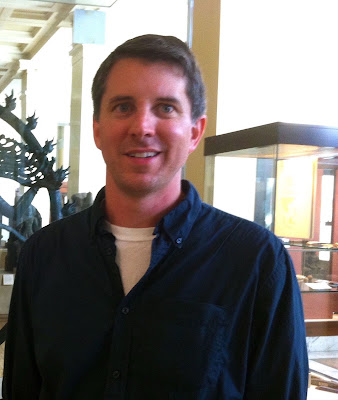 William Allegrezza edits the Moria Books and the e-zine Moss Trill.  He teaches at Indiana University Northwest. He has previously published many poetry books, including In the Weaver's Valley, Ladders in July, Fragile Replacements, Collective Instant, Aquinas and the Mississippi (with Garin Cycholl), Covering Over, and Densities, Apparitions; two anthologies, The City Visible: Chicago Poetry for the New Century and La Alteración del Silencio: Poesía Norteamericana Reciente; seven chapbooks, including Sonoluminescence (co-written with Simone Muench) and Filament Sense (Ypolita Press); and many poetry reviews, articles, and poems.  He also edited The Salt Companion to Charles Bernstein. He founded and curated series A, a reading series in Chicago, from 2006-2010. In addition, his book Step Below: Selected Poems 2000-2015 was recently published with i.e/Meritage Press.

Where are you now?
I’m in the Chicago suburbs of Indiana, a 35 minute ride from downtown.

What are you reading?
On my desk right now are the following books: Tyehimba Jess’ Olio, Robin Coste Lewis’ Voyage of the Sable Venus, Mark Nowak’s Shut Up Shut Down, Robert MacFarlane’s Landmarks, and Mark Young’s some more strange meteorites.  I’ve been reading Young’s work for years, and I really like the sound of the language in this book.  He’s really excellent at the line break, and the pieces show the influence of haiku on his work.

I feel most at home reading experimental poetry, but I try to read widely so I keep up with what is happening with all types of poetry.

What have you discovered lately?
I didn’t really discover it lately, but I find the Asemic/Vispo online groups fascinating.  I can get lost for hours just sorting through the different images and figuring out what the pieces are doing.  We often talk theoretically about how different poems make you figure out how to read them, but that is definitely clearer with Asemic poetry than other pieces because the traditional form of poetry is removed as well as the words.  One’s very expectations of poetry are thwarted, so the reader has to follow the design to find an interpretive stand.  I especially like the work of Marco Giovenale, Craig Svare, and Tim Gaze, but many, many excellent poets are doing visual work.

Where do you write?
I write in my basement.  I have a collection of typewriters there to use, a computer, and a collection of sharpies to write on objects like wood or recycled materials.  It is a fine place to write, but it is not as productive for me as my last place.  There I was in Chicago with a study that looked over a neighborhood street.  With the trees, people, and sunlight, I was more productive.

What are you working on?
I have two collections that I am working on currently.  One is based on my typewriter pieces.  I’ve been amassing a collection of hundreds of temporary poems.  I type them quickly and then throw them into a pile.  Every so often, I go back through the pile sitting in front of a computer.  I combine the pieces and edit them.  The second collection I am working on is based on a form that I created a few years ago.  I have been writing pieces in that form quite often, but I have only published a few pieces.  I find that the form makes me go more personal than I like to publish, so I have been working with the pieces to make them come out less me and more poem.

Have you anything forthcoming?
I don’t have any forthcoming books, though I just published a critical book titled Epics of the Americas.  It’s essentially just a reprint of my dissertation.  I have several pieces coming out in e-zines and magazines, and I am shopping around my last completed collection.  It’s funny to me, for at this point, I’ve published sixteen books, and I have not found anyone interested in my latest collection, so I’m wondering if I should scrap it and move on.   I like it, but perhaps I am the only one who does.

What would you rather be doing?
I’m a poet.  I’ve chose that, so there’s nothing I’d rather do than that, except for add on to it.  Like, for example, I’d like to spend all my time traveling and being a poet.

(Published originally in On Barcelona.)

2.
i call through ruined buildings
wrapping a central figurine
in fire but my once rough voice
is now speechless with design or
desire.  we are stabbing at loneliness
abstracted and pale though we are
not turning, have not shifting the hour
of sun and root when hidden things
emerge, though we see and have not
seen the fruit waiting for touch,
have heard the blue songs newly
opened through closed ears.
life so rich refuses to bear the black and
gold of our suddenly pale creation.

(Originally published in the book Densities, Apparitions put out by Otoliths)

Email ThisBlogThis!Share to TwitterShare to FacebookShare to Pinterest
Labels: We Who Are About To Die, William Allegrezza