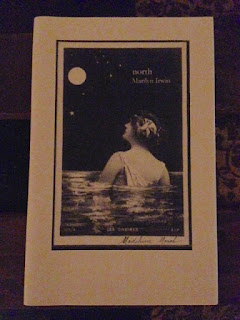 It’s the only mention of “she” in “epilogue” and, given the prior couplet, it’s possible that “north” is being used geographically. Or, perhaps the abrupt change in perspective is making a solemn, figurative pronouncement – who’s to say? With the uncertainty of “epilogue”, Irwin throws a wrench into her own well-constructed malaise and alerts readers, who had settled into the woman’s decline, to re-evaluate both voices. No spoilers here – I only have theories – but North is a haunting little chapbook that sharpens "the boring stuff" into vital, heart-churning attempts at salvaging a life.
Posted by Andy at 10:31 AM