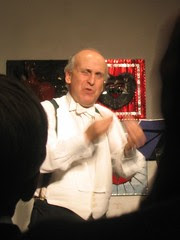 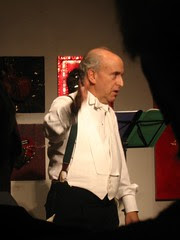 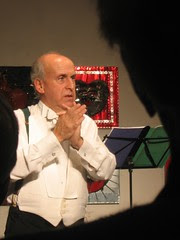 Peter Froehlich's one-man-show is a collage of MERZ poems meshed into a context of the anecdotes and legends of this artist. The show ended at Nov 16 at the Cube Gallery

The first part of the show was biographical, a history lesson done in broad black comedy style of grief and repurposing props even so the fishbowl, the watery grave of his beautiful loyal fish, become water to nonchalantly drink, then later the glass becomes wine at the cafe table at a banquet of Hitler. What we think is a coughing fit from drinking the water and him groping forward to the music stand for support, is transformed to him tuning to the next page of notes and that the coughing is sound controlled. Everything expected is turned on its head.

The play with reversals became a subject almost as much as any subject, such as beautiful Anna, "the same from the front as from the back" (A-n-n-a, or a-n-n-A). Anna is so unlike Hannover itself, which in false etymology becomes the forward of what it is in reverse "re von nah" re –back, von – from, nah– near. Therefore it reads and means forwards Hannover – "forward to far". His stepping out into the meta was explicitly explained as well. "I play off sense against nonsense. I prefer nonsense but it doesn't matter. It's a matter of taste."

Timing, pause, variance in rate and tone of voice independant from meaningful words all had an perceptible reality in teased out in isolation. Imposing meaning or letting sound become meaning or meaning disperse from conventional meaning is the core of Metz. It deals with the same sort of reducing sound until it loses meaning and starts to mean again rose occasionally in his syllables as The Four Horseman Project.

How to express the sounds to text is a bit tricky. The whole show is poorly captured in piece or page, being so auditory and interwoven. Does it give any idea of the play with sound expectations of lo la, la lo, lo, la, la lo...da da, da da, and the French alphabet letters in paired sets so that BéDe, BéC BéBé Béah. The refrains of building sound made a sort of narrative arc of coming to expect a pattern of vowels to repeat. They became like chapters of certain vowels, then a page turn and a new set.

He was playing with the expectations of linear narrative of relating a story, losing his place, becoming confused, and starting way back in the story, tangenting, where was I? oh yes and restarting way back in the story again. The audience laughed harder each time yet each time he told it, he pivoted the focus. When he got most of the way thru the story of the crowd gathering to look at a "man who was just standing there", he wrote out one character but left in the discontinuity, saying, this is where the police came for him, except that can't happen now because he no longer exists.

This looped back in the second half when the music stand of pages he was conducting himself from diligently progressing forward for half the notes, he started messing with direction, going backwards thru pages instead of forward or flipping to (seemingly?) random pages forward and back thru the score. This made peals of laughter and started the couple people on their giggle fits again.

An Ottawa Citizen report by Patrick Langston. No one left as Langston related for the performance he saw, but people did ragdoll over with laughter, 4 people in rows ahead were wiping tears from their eyes laughing. The head bobbling he remarked on of people moving in rhythm thru the sounds was there too. Which isn't to say it was non-stop comedy. The build of tension, the play of Nazi movements against the life of the artist were there, the neutral palette of sounds and the dramatic stories against the deliberate tossed in nonsense all kept the tone alive. 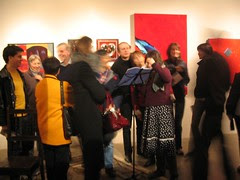 As soon as the performance ended a portion of the crowd rushed the stage to get a personal look at those notes that scored the sound. How did he do that. People were flipping thru and peering over and around each other.

You can hear the original recording of Schwitters doing Ursonate at UBU. In the original, he was more playing with notes and musicality it seems. This interpretation used more monotone with sudden leaps up the scale as yelps that broke the pattern in what seemed like falsetto by comparison. You can hear another version of the script at Ubu by Jaap Blonk.
Posted by Pearl at 8:39 AM