November 1st the poetry and poetic prose of the NeWest tour triumvirate came to Ottawa as part of their cross-Canada reading. Last in Montreal, next in Toronto, ryan fitzpatrick, Natalie Zina Walschots, and William Neil Scott gathered a crowd in Ottawa at the Ottawa City Hall. 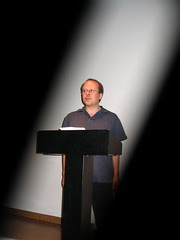 Their readings were the launch of the newest series in town, Max Middle's A B Series.

The #2 in the series was to be held Saturday but has been postponed due to illness of the reader. The #3 reading will be queued up to November 14th's at the Avant-Garde Bar at 135 1/2 Besserer Street. It will be an Ottawa launch for Booty: Hurricane Jane and Typhoon Mary published by the Mercury Press with readings by authors Brea Burton and Jill Hartman.

The readings November 1st stocked up a variety of styles that people enjoyed even if there wasn't heckling in proper Calgary style. Perhaps call a friend? 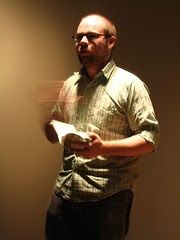 ryan fitzpatrick, previously of filling station was reading from his newest book Fake Math from Snare books with lines like 2 children are a form of pastorialism or in new poem a series of pivots remarking on our societal ADD obession with newness and change, unequal or unbalanced pairs, such as I could eat some words, or a cinnamon donut which worked some laughter out. 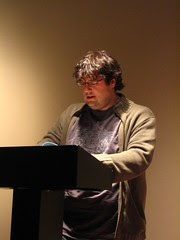 Neil Scott was reading from Wonderfull, which was.

Entrancing carry you away...stories such as the narrator's father riffed, the discovery of the new world by a chartered captain and the paying man who end up shipwrecked on a nameless beach at each other's throats, held at bay by an endless game of dominoes. The winner would get the peace of being the last man to use a pistol. 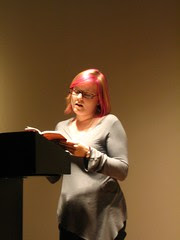 Natalie Zina Walschots was reading from Thumbscrews which has playful poems. What struck me most in their control of sound, reinforcing subject and mood and how sound choice moved from short i sounds and unvoiced consonants to harsher gutterals and voiced plosives. Another overview of the event is here and with excerpts of her work and more.

Some of the readers and hearers moved on to after bits including these folks.
Posted by Pearl at 9:28 AM