I must confess that, for me, a poem starts when I simply begin to say what I’m seeing. Then comes the much less simple task of wrapping that sight or vision into a vocal collage of gathered words, text, image, metaphor. The true labour is in integrating these fragments with notions and conceptions of what a poem does and how a poem can come together. Inexplicably, a framework or loose narrative begins to take shape.

In thinking of beginning a poem, I’m reminded that it’s mostly this mysterious leap across a threshold into language. For me, the words of Seamus Heaney are helpful here. He spoke of poems as starting in a certain kind of “infancy,” in an unspoken-ness. Heaney said: “All good poems have been gathered in silence and have moved from the unspoken need, to the luck of getting spoken right.” I tend to agree with him. I have a line of my own recorded in one of my notebooks: “Let an unshaped voice spill out.” This is a related sentiment, my personal attempt at articulating a kind of permission to say what must be said, in an unencumbered way.

To back up a bit, to begin with, I often scramble, in hopes that I’m expedient enough to gather the nascent bits of image, metaphor, line, into the “Notes” app on my phone, or else penciled into the small notebook carried in my back pocket. It’s imperative I get the notes down before the particular image or language disappears and in more cases than I care to count, most likely never returns. In this way, for me, the notebook is an essential tool to corral the useful, fleeting thoughts, to be recorded for later use. I think this means that my notebook functions much like a fragmented daydream diary. I recall Matthew Zapruder described poets somewhere as, “lucid dreamers.” Within my own experience and mode of coming to poems, I can identify with this label (as much as a label is of any value).

Aside from an accumulation of notes, often the unloading of frequent free-writes is a beneficial precursor to traveling the path to a poem. I say this, but this the whole process is highly mysterious. And to embrace this mystery is the crucial part of my practice, since mystery equates to an abundance of questions (with few obvious answers). There’s a feeling like every new poem I write is, in some way, questioning or experimental. Experimental, in the sense that each new poem is a novelty and I’m testing its limits, putting it through its paces, and sometimes like building a plane while also flying it.

In making poems, I’ve recently spent considerable time contemplating the role of metaphor in my work. Specifically, I’ve been playing around and comparing things like garbage to lasagna or a mountain to a watermark on paper. I find the figurative elements can require more time to percolate, brew, steep. The exactness of putting words to this, for proper effect to a reader’s ear/mind, is where the work is. And as Heaney expressed, it requires a certain amount of (or often mostly) luck. The language comes or it doesn’t. And if it doesn’t, I put the poem down and pick it up another day.

In the beginning, especially, I think of poems as objects which are ready to burn. I find that any and all things can (and perhaps should) be material for a poem. I like to think of this poem-stuff as a sort of kindling, ready to split, the material needed to start the fire. It requires taking a hatchet to the loose structure. I suppose what I’m saying is that, to start with, poems are incendiary and quite unstable.

Reading is important, so important. As I’m thinking about poems and moving through the process of making a poem, any smattering of poets might occur to me. The most beneficial thing I have found is the concurrent practice of closely reading the work of other contemporary poets. Something happens as I voraciously consume and digest poems. I notice some similarities in the work I’ve been doing with the stuff I read from these other poets. I’ll think, “Hey, I like that.’ or “Oh, I’m doing something a bit like that, too.” It’s a sense of confirmation that I’m on the right track, that others are also putting stuff out there, asking the reader how it’s working.

I see the boundaries and conventions of poetry as the thin rubber sides of a balloon, waiting for the hot air of a poet's voice to stretch, the stuff of form, into a poem’s final expansion or shape. It is as the edges are pushed, the really interesting stuff can happen. Think balloon animals. If you picture a balloon-chicken now, that’s about right. Pecking away at poems, over time, is my process.

And over time, the most interesting part of developing as a poet is learning the rules, then leaving them behind. Kayla Czaga, my mentor at SFU’s The Writer’s Studio, once reminded me of this, in the situational and contextual use of adjectives. Adjectives are typically frowned upon when used or relied on as ‘poetic devices’ (on the wrong side or the “Show vs. Tell” paradigm/heuristic). I’m often recalling these rules and discarding them simultaneously as I revise my work. Her helpful reminder: “There are no hard and fast rules.” As a poet you must “work it out for yourself.”

So, in making a poem, the process is really at the discretion of the poet, governed by their creative impulses. Of course the other side of the equation matters, a reader's willingness to engage the poet linguistically and creatively in a type of conversation. As I work, I’m vaguely aware, there’s this relationality that must play out, as a poem is filtered by first readers and further outward. But in this, I try not to forget that making a poem is basically an endless first step, entangled and wonderfully messy: create, play, engage, subvert.

In the messiness, I try new things and very often they fail. Which just means I’m getting somewhere. If a poem is ever finished, I’ll have to tell you when I get there. In the end, which is never really the end, I think of Jim Harrison, recorded at a reading he once gave. He spoke of one of his early poems, “Walking,” in a kind of sarcastic self-criticism to relish in. He said: “Well, you know the great thing about art is that it doesn’t have to make sense.” 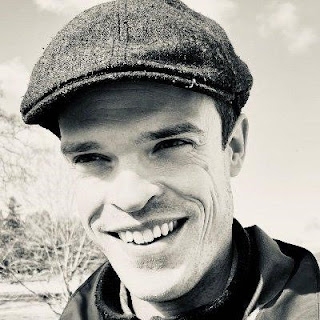 Michael Edwards is a poet, writer, editor and busy dad living in Vancouver, BC on traditional, unceded Musqueam territories. A graduate of The Writer’s Studio Online at SFU (2020), he has been published in various online journals. Michael is also the editor of Red Alder Review, an online publication focused on building connections between writers and the wider community. michaelwriter.home.blog // Twitter: @michaelwrites1
Posted by rob mclennan at 10:00 AM