Usually my poems get started with a sudden, unexpected inspiration or jolt that causes a few words or a line or occasionally multiple lines to pop out. Often the lines are semi-abstract and not based on content so much as on feelings. That part has changed to an extent over the years. When I was younger, my poems tended to be a little bit more content-based, sometimes character-based, sometimes focused on stories or specific ideas worked into poems. But now it's often more like visuals or emotions worked into poems. Granted, most of the visuals and emotions are derived from parts of my own life experiences.

Recently (at least partly because of covid related issues), I've been having more trouble than usual with concentrating and focusing my energy and I've even been feeling less inspired.

But usually my jolts can be catalyzed by any number of things, from reading other poems to movies to dreams to art to news articles etc... Sometimes it just seems to come from out of nowhere.

In the past, I made more of a purposeful effort to catalyze my own poems (through writing prompts, setting aside specific time to write even if I wasn't in the mood, and so on). Now I usually just wait for them to suddenly and naturally emerge for their own reasons. I still need to set aside time though, because even if my poems come out more naturally than they used to, that doesn't mean that a whole poem spurts itself out in less than 10 minutes and is automatically done. It's more like the initial starting point of a poem come out faster, but then it still needs to be shaped and completed.

I would say a phrase (or several phrases), a word (or several words), and a very loose structure combined with emotions, thoughts and feelings. I don't tend to think of my poems as stories, so I don't begin with an idea. I think of my poems more like art combined with or derived from emotional thematics. Depending on the poem, the art/emotions can range from abstract to over the top to broken down diary explorations. It usually feels personal in one way or another

Earlier this year, I was unexpectedly prompted to write a small series of poems semi-inspired by this year's coronavirus. I don't usually tend to purposely write poems based on current events or what's in the news today, but these just surged out, probably in part because I was so stressed out and semi-panicked by the pandemic and when I'm feeling mentally imbalanced, it often helps to attempt expressing my feelings poetically.

Quite a few poems came out faster than usual and I ended up organizing/formatting them into a small chapbook manuscript, but now I'm not sure what to do with it, because it seems like the longer bad things last (the virus, that is), the more people want to ignore them (and/or even if people aren't ignoring the issues in terms of their behavior that doesn't mean they want to read poems about it too).

I think these pandemic-inspired poems happened for similar reasons that a lot of my poems happen. My brain feels the need to creatively extract negative energy into poems. If 'm really stressed out or anxious or depressed or sad or angry or worried or upset, I'm drawn to trying to express that via poetry.

I'm not very good at writing upbeat or positive or happy or love-oriented poems - and the few times I have tried, even if they're decently written and involve genuine expression, they tend to bother me afterwards and seem unimportant.

All of the above in different ways? Initially, I feel like I'm starting a new poem at the beginning, but as I continue working on it, its order can be somewhat rearranged - and of course parts of it can be eliminated.

For years, the most challenging part of a poem for me seemed to be how to end it. I'd go on too long until it went from feeling interesting to overly obvious by the time it reached the over-done end.

In more recent years, I tend to be fine with the end of a poem seeming relatively random, because that's often life and death.

Usually the last thing I do with a poem is title it. I'm not a fan of untitled poems or numbered poems (with nothing else but the number), partly because I feel like that might be rather lazy because it is sometimes hard to title poems.

When I'm working on a small series of thematically linked poems, I'm fine with using the same title for all of them (for example, my small series of virus-inspired poems are all entitled "Museum of Impending Death"), but with individual poems, for some reason, it's more challenging to me.

I used to for many years, but not nearly so much anymore. I like print notebooks and journals, both visually and conceptually, but in recent years, I'm increasingly disorganized with that sort of stuff. I think there might be semi-illogical mental reasons, because I really have no logical explanation for the facts that I tend to have multiple different notebooks with different things written in them, lying all over my house, instead of just sticking to one notebook until that notebook doesn't have any blank pages left and then moving on to the next one.

Then there are the piles upon piles of notes written on individual sheets of paper, all over the place.

It's almost like I'm some sort of semi-obsessive compulsive notebook/paper hoarder or something. I mean, I do write in/on the notebooks and paper, but I don't understand or can't quite explain why I don't finish one before I start another one (and another one and another one). Thus what seems akin to illogical hoarding - but a rather unusual sort of hoarding, not based on saving things for no apparent reason so much as based on my brain being in the moment.

Maybe that's part of the reason I do most of my poetry writing on my computer these days. In the past, I always used to start my poems in print notebooks or on paper until they reached a certain point, but not anymore.

Maybe some people spend a lot of time organizing and storing their materials, but I spend a lot of time creating new materials and then moving on to the next one.  I  don't ignore my past, but I don't keep on organizing it into files, because that would cause me to feel like I was backtracking.  In terms of my present activities, I tend to be very week to week and day to day.

I'm fine with that for the most part, but I do worry that when I die, my space will be an unorganized mess (both paperwork-wise and computer-wise) and nobody will know where anything is or what anything means to me because so much of it is inside my own head and/or stored in my own odd ways and/or in recent communication with the very few people I'm close to, and even they don't know how my poetry stuff is organized/unorganized.

But I don't want to be one of those people who spends more time cleaning and tidying and organizing instead of thinking and expressing and creating.

But even so, I think maybe I should try to find a little bit more of a balance for organization of my own materials so I don't end up surrounded by my own unorganized chaos.

No. I'm certainly sometimes inspired by individual poems/poets (and sometimes visual art/artists, music/musicians, movies/directors, or TV shows), usually on a visual or visceral emotional level, but not while I'm in the process of actually working on a poem. Even if a particular poem or song or art piece catalyzes my poetic process, once my own process begins, then that's where my focus is.

Here's the first Museum of Impending Death poem, which appeared in Can We Have Our Ball Back? this past April.

It's hard to fall asleep
without knowing I might die.

Exhaustion tries to pull me in, sink me down,
drown me in its catastrophic well. 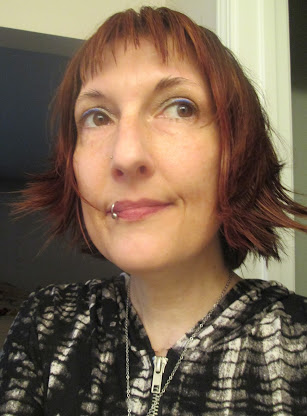 Juliet Cook's poetry has appeared in a small multitude of print and online publications, in the course of over 25 years. She is the author of numerous poetry chapbooks, recently including From One Ruined Human to Another (Cringe-Worthy Poets Collective/Dark Particle, 2018), DARK PURPLE INTERSECTIONS (inside my Black Doll Head Irises) (Blood Pudding Press for Dusie Kollektiv 9, 2019), Another Set of Ripped-Out Bloody Pigtails (The Poet's Haven, 2019), The Rabbits with Red Eyes (Ethel Zine & Micro-Press, March 2020) and most recently, Histrionics Inside my Interior City was a part of Ghost City Press's 2020 Summer Micro-Chapbook Series.

Find out more at www.JulietCook.weebly.com.