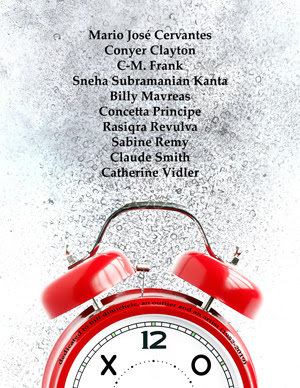 Amanda Earl is the managing editor of Bywords.ca and the fallen angel of AngelHousePress. She’s a writer, visual poet, editor and publisher. More information is available at AmandaEarl.com or connect with Amanda on Twitter @KikiFolle.

AngelHousePress began in 2007. I created it to self-publish my odd colourful work because I didn’t imagine publishers could afford to publish it and I also thought it would be too expensive to publish in large numbers of copies. I made 26 copies of Marauders of the Fold, Postcards from The Museum of Broken Glass, and Speaking in Tongues.

My poetry group was making some interesting poems, and we decided to publish a chapbook, so we made Whack of Clouds in 2008 and I published it through AngelHousePress. I wanted the press to be a place that published ragged edges, raw talent and rough edges because I saw a need for such.

Since 2008, twice a year, with the exception of the fall, 2009, we’ve been at the fair 21 times. I love it. I love chatting with people about chapbooks, meeting old friends and new, and bartering with other chapbook makers.

We ceased publication of chapbooks in 2019, and have moved to an entirely online format. See Amanda Earl: AngelHousePress: from ragged edges to advocacy in Periodicty: a journal of poetry and poetics, May, 2020.

For the next fair, we’ll be bringing chapbooks from our catalogue, including Hiromi Suzuki’s Adagio, Paddy Scott’s Fatal Errors (DevilHouse, 2018) and more. Our print publications were published in editions of 50. We’ll continue to bring them to the fair until we sell out.

In April we published NationalPoetryMonth.ca 2020 Ode to the Small with contributions with 30 poets and visual poets from all over the world. I had already been working on it since January and when effects of the pandemic began to be felt, first in Asia, then in Europe, we already had all the contributions, but there are some contributors I haven’t heard from. I hope everyone is ok. Other contributors have begun lovely e-mail correspondences with me. I think a lot of us are finding we need to reach out more. NationalPoetryMonth.ca is always read and commented on by numerous readers, but this year it feels like we had a higher vistor rate and I received more comments than usual from readers. All were kind!

We’ll be publishing Experiment-O Issue 13 in November online. I will invite 10-12 contributors who make visual art, poetry, visual poetry and prose from all over the world. I begin working on that in June.

And we continue to publish essays on our online essay series. In 2020 so far, we’ve published four essays on the site.

Our podcast, the Small Machine Talks, continues to have episodes. I was concerned that we wouldn’t be able to have interviews during this time. I’m not technologically inclined much. I thought about how we could still have episodes so that people would still be able to listen to our show, which is broadcast at least once a month. I did a couple of episodes alone, such as episode 56, which was my own engagement with the poetry of Adele Barclay, and episode 57 where I used Klara Du Plessis’ deep curation of readings idea to make a solo episode reading poems and prose that featured trees, gardening, wandering and spring, with the idea that since many people were unable to experience nature first-hand, being in isolation or living in spaces where they weren’t able to safely go outside, hearing about spring and wandering about would be a lovely thing.

Episode 58 featured pre-recorded audio of contributors from Experiment-O, and there will be another such episode soon. For the end of the season, my co-host and I will be doing an interview together but virtually using Zoom. Charles, my husband, who does our tech, has figured out how to record separate audio channels for each participant.

These days all our activities are online. This seems prescient in some ways. I like the fact that readers can turn to Experiment-O to read previous issues, or to revisit this year’s NationalPoetryMonth.ca. And The Small Machine Talks offers the opportunity for quiet listening and moments of stillness, which I think is important at this time as well.

I have attended two Zoom events since the pandemic. I had previously attended one. I find it very uncomfortable in many ways, but I did enjoy the two I attended: The Iridescent Robot Storytelling Club, organized by Danielle K.L. Grégoire, and the SpokenWeb watch party for Episode 8. But I would have enjoyed them more as just audio with my listening anonymously without any need to register myself as an audience member. I mute my audio and turn off my video as an audience member. I prefer pre-recorded stuff to live when I’m at home.

I am always connected to the literary community. I continue to read magazines, books, chapbooks and let the writers know via social media about my engagement with their work or I write notes about their work. Recently I wrote notes on Canisia Lubrin’s new long poem, the Dyzgraphxst. The notes were published on Periodicty: a journal of poetry and poetics in April, 2020.

The best way for me to engage with the literary community is to read and respond to their work. It has always been so. Even before the pandemic, I had been attending fewer events in person. I’m too tired these days for nights out and my body doesn’t feel comfortable sitting in hard-backed chairs or shivering in cold pubs for hours at a time. I prefer one-on-one activities with friends, rather than awkward small talk at events. This is a huge change that has occurred in the last few years. I used to attend a lot of events, and I enjoyed them, but I think this current phase of not attending many readings, either online or in person, may last for a while.

As a solely online publisher, so far we haven’t had any effects in terms of production.

Q: What are your most recent publications? How might people still be able to order copies?

NationalPoetryMonth.ca 2020 Ode to the Small – free and online until February 28, 2021
http://nationalpoetrymonth.ca/

Experiment-O Issue 12, published on http://experiment-o.com/. free along with all issues.

We Traced The Shape of Our Loss to See Our Face by Hannah Rodabaugh $10 (AngelHousePress, 2019)

Episodes of the Small Machine Talks, episode 13 of Experiment-O and I’m always looking for more essays, rants, manifestos, reviews and interviews or hybrid combinations of such for our essay series. And I’m still looking for more people to participate in the DevilHouse Six, a series of questions which explores the concept of the transgressive in art and literature.