caveat:  once I was asked this question and I hacked together a smartish sounding answer and my partner at the time later was like man the real answer is I come home and you have 25 tabs open all of synonyms for “dirt”.  so.  there’s that.

here is my notoriously incorrect self analysis:  I wait until I have an idea—this waiting usually feels like I have given up on writing and ideas—I read my books and wait for something to interest me, both in the realm of some sort of architecture-of-thought [about a given set of things] and also formally, prosodically.  maybe the lulls are when absolutely nothing excites me so I have nothing to study, nothing to attempt, but also some times I think of it like some sort of gestational primordial soup of a back burner in my mind thinking along until there’s some sort of form, some readiness to the ideas.  this is true of my first two books but my third book had a different set, or angle, or dimension, of first principles, which was annoying to concede to.  anyway.  right so it seems to me that first poetry is made of words, and, intrinsically, words are made out of sounds, and in conjunction with eachother words and sounds form beat structures, prosody, no matter what.  so it seems like if yr not contending with those things that’s like a painter disregarding colors as foundational to the form of the painting, or light and dark, or brushstrokes.  I think my study began when I started studying prosody in this way like, as a mechanism.  but I wont suggest mine, go find yr own obsessions.  and then in my life and my writing there’s just ideas, the question of what’s interesting.  in BEAST FEAST it was ideas of the law, the state, lawlessness, chaos, randomization, order and also probably “America” and ideas of freedom, and queerness.  In Flung / Throne I had just read John McPhee’s Annals of A Former World and was trying to conceive of geologic time and the evolution of consciousness and sentientness and sensation and like I dunno mitochondria and stuff.  I didn’t write my third book for a long time because every time I tried to write it came out this earnest personal emotive goop which... like I just don’t normally find interesting in poems, so I was like damn bitch fine I’ll wait it out till this passes, and then it didn’t pass, this was all after my dad died, also I think living in the south, in Arkansas, was reaching its roots in me, and, fuck it, love exists, or whatever, like it happens to people.  Anyway I wasn’t bored of prosody but I couldn’t find anything stunning to break apart and figure out how it worked on that level and I just for whatever reason turned to the things my dad had given me when I was younger, maybe that’s a common returning-to, but so Rilke and Nietzsche and Ovid and Homer.  so like there’s yr earnest anguish in the 1st two, and the world as magical and fickle, and then what I ended up wanting to study was the emotive and architectural effect of motifs, of the recurring refrains of codified language, the way those repetitions build up an increasing emotive force and meaning and anchor and thread.  I think my third book is mostly a lovesong to Arkansas, and to grief.  So yeah, I don’t, much, conceive of “a poem” ... my friend the poet Sara Nicholson once told me she was just trying to write “poems” like as opposed to the whole arc or argument of a whole ass project, and I remember it blew my mind.  Her poems are beautiful, and complete, as poems.  I don’t think I can do that, I can mostly only think of mine as “movements” or something, all angles towards some constellation.  but I will say when I’m working on a project I gather a stack of books whose writing I want to shape the writing I’m trying to write and read and reread them until the prosody and the lineation and the way things are used goes like below the level of “I-I-understand-in-my-brain” (useless) to some deeper melding of understanding in my understanding of lines, prosody, lineation, image, all together.  which is also why you have to be careful what you read, because it gets in there whether you like it or not, its a careful question of choosing how you want to be shaped, I think.  a thing to guard.

I understand this doesn’t answer the question of why the fuck my poems look like that on the page.  all I can say is sometimes I draw out the forms before I have the words for them.

Amway, I’ve had some thoughts forming for a few years now towards some different thing, no frills no imbecilic flourishes, that I’m just starting to grapple with or conceive of and there’s a way in which that can’t be talked about, cuz if you look at it too hard the form that’s taking shape in yr periphery will collapse.  but these days I’m mostly googling words that rhyme with “justice” 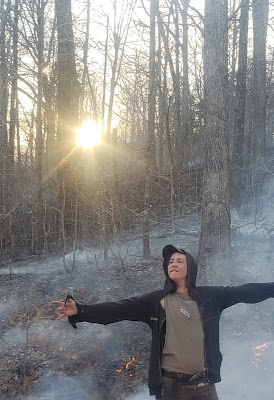 Cody-Rose Clevidence is the author of BEAST FEAST (2014) and Flung/Throne (2018) both from Ahsahta Press, and Aux Arc / Trypt Ich (forthcoming from Nightboat) and several handsome chapbooks (flowers and cream, NION, garden door press).  They live in the Arkansas Ozarks with their medium sized but lion-hearted dog, Birdie.
Posted by rob mclennan at 10:00 AM