Lately I will re-discover a file on my computer with a title that I don’t remember writing. Then I open it and re-work the contents into the shape of my current impulses and concerns. I think it’s fair to say that I work from a “scattering of notebook entries” but with an eye toward smoothing out the transition points.

I often write toward certain gestures that I’m using at the time and merge an older sensibility of mine with a newer one. For example, a while ago I wrote a poem called “Minnow Pulses” (link to poem in Jubilat http://www.jubilat.org/jubilat/archive/issue34/five-poems/ ) that is built of phrases containing a larger image embedded in a smaller image (“The ocean in a jellyfish. The sky in a cloud. The storm in a worm.” etc.) and I liked how clean and simple that form was while remaining evocative. After writing that poem I have tried to use that move here or there while also evolving in it different ways.

There is always the danger of forcing the old fragments into a new shape in a way that feels too artificial. However, if I can trust the previous self enough to preserve some of the surprise that drove the earlier draft while also allowing it to drift in new directions, then I usually end of keeping the result.

I have a file open on my computer now that is called “And everything and I started seeing” which is an echo of the final line of Frank O’Hara’s poem “The Day Lady Died” ( “…and everyone and I stopped breathing”) and probably is also influenced by the title of my friend Whit Griffin’s book We Who Saw Everything.

The lines of poetry inside that file are in prose, and I can tell that some of them are collaged from previous poems that I’ve written while others borrow syntax from friends’ work or other writers. Inger Christensen’s book/poem Alphabet has been in the back of my mind for the past few years, and reading her work helped my write the poem “Minnow Pulses”, which I’m now using as a template to grow and graft new language upon. 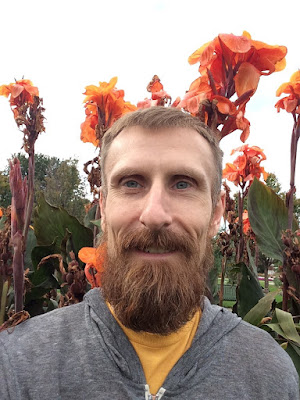 Eric Baus is the author of five books of poetry: How I Became a Hum (Octopus 2019),
The Tranquilized Tongue (City Lights 2014), Scared Text (Center for Literary Publishing,
2011), Tuned Droves (Octopus Books, 2009), and The To Sound (Wave Books, 2004). He teaches literature and creative writing at Regis University’s Mile High MFA program in Denver, where he is assistant director and core faculty in poetry. His latest is the chapbook Euphorbia (above/ground press, 2020).