Aside from a couple of short stories published many years ago my real publishing career began in the 1990’s and was comprised solely of poetry which I had begun to write at a fairly furious pace and subsequently see published in magazines. This resulted in my first book “I’m not going to lie to you” (Pedlar Press, 2007, ed. Emily Schultz). Everything that I’ve published since in book form has been a novel, but I continue to write poetry and my newest poem is coming in the next issue of Taddle Creek. My process has not changed much at all over the last few decades, but the results have, I think.

The new poem is entitled “The deeper the joy” and like most of my work it began with both an image and a phrase. I was reading about the conspiracy theory that comedian Andy Kaufman faked his own death in order to escape his celebrity status. Kaufman’s brother Michael followed instructions from Andy to meet at a specific restaurant on Christmas Eve 1999. Michael did so, whereupon a man he did not know walked up to him and handed him a typed letter from Andy, who wrote that: "everything is great in my life and I just wanted to get away from being Andy Kaufman.”

The mental image that began the resulting poem was that of a diner with tinsel decorations and red banquettes in the evening of Christmas 1999 with heavy snowflakes falling outside through the streetlights and a man in a booth waiting for a brother who would never show up. I suppose if one chose to look deeply enough one might conclude that it had something to do with my problematic relationship with my own brother, but I make it a habit to never look too deeply into my own work. The phrase that went with the image was that of the title; the deeper the joy. I found that phrase on my phone which is where I keep memos of all my thoughts for books, snatches of dialogue, titles, phrases, ideas. I have over 1,500 notes on my phone and often by the time that I end up using one in my work I have no memory of how or under what circumstances it originally occurred to me. This phrase has some connection to the body of the poem solely by definition but that relationship is also something that I have not defined for myself or for the reader.

The poem (I can’t use it here as the rights to it have been sold) is 291 words and like all of my poetry it follows no proscribed form or structure; my line breaks happen when I feel like starting a new line, my “stanzas” isolate sections of thought from each other, and the poem is usually about its ending. I don’t do anything special with language and, unlike most of my prose, I don’t experiment. To be honest I barely think of them as poems at all – there are people who actually write poetry, I just put together these small compositions which occur to me as something separate from the ideas that I can use for novels. I don’t want them to be orphaned.

I prefer to think of them as small moments, but they are certainly not crafted with any sort of innovation or as an engagement with form, structure or existing bodies of work. I read other poets and I have adjudicated for granting organizations, so I do see a lot of contemporary poetry. I’m not doing (can’t do) what those poets manage, and I can’t say that I really even think of myself as a poet at all although I’m aware that some others may. Certainly, these pieces are getting published as poems and I currently have four or five out at magazines so perhaps I am a poet by default. I think the creation of poetry, particularly innovative poetry, is a very important thing – but that’s not what I do. I craft small collages of moments which attempt to relate the universal to the specific without any concrete or conscious thinking about the use of language or even of form. For me, that’s not poetry, that’s just writing.

Here are two pieces which are not in circulation because I don’t feel that they are successful, ultimately or (perhaps) yet, but they do provide an example of what I’m working on:

what bluesman Lightnin’ Hopkins has is a certain reality
he has it by the throat and he’s holding it right down to the ground
and nobody can take it from him
“There’s certain names for snakes – was that a king snake? Was that a cobra? Now we don’t know one snake from another, and they say some poison snake if he bite ya you’ll die in a few minutes, so I didn’t mean to do the snake too much harm but I did by breakin’ his neck.”
he’s about the realest thing there is for three counties
you know what we have now is we have a culture that won’t stand for lies from their artists
everybody’s got to be honest all the time.
But with Lightnin’ it’s hard to say what’s true and what isn’t. Try doing that today. They’ll mount you up onto the facebook like a shot moose.
“One thing I do not like is a snake. I been told my bible stories and that ain’t the half of it. You see one of them big ones we got down here come at you from out the tall grass and you ain’t gonna like it neither.”
it’s a different kind of honesty and nothing at all to do with telling the truth
remember when we expected our artists to be liars and thieves and degenerates?
we had no illusions, then
“I ain’t seen no kinda snake ever that I liked. Saw one down by the tracks and I just grabbed it and I killed it.”
What kind?
“Big as shit kind.”
Did it have a forked tongue?
“You ever seen one that ain’t?”
and here’s something that he never said:
“I saw one fella one time get full baptized in the river, put right full under and he was a sinner again before his clothes even dried out…”
Feels like he could have said it though, and maybe should have, and maybe did.

Like the upcoming… poem?... in Taddle Creek, this one began with an image and a phrase and extrapolates those into the form of something that strives for the universal while remaining very grounded in the specific. I like the way the first two words of the title operate on more than one level. And like all my work it is next to nothing without its ending.
Here’s another:

white bird in a blizzard lost

and if the phone rings
I will not answer it.

I was not magnificent enough for you and you left.
And you know what, you were probably right to do so.
And I can see for miles and miles and miles
but there is nothing left for me to see.

As I noted; this is not poetry that sits at the cutting edge of what constitutes the best work that is being produced these days – it is distinctly not of its time. As a novelist I’m very much aware of how my work might fit into what is currently the work that is moving the form forward – the best work. That is what I strive for in my prose. This is not that. This is what I do when I’m not writing novels. I am very pleased that it gets published. I certainly hope that it doesn’t get in anyone’s way. 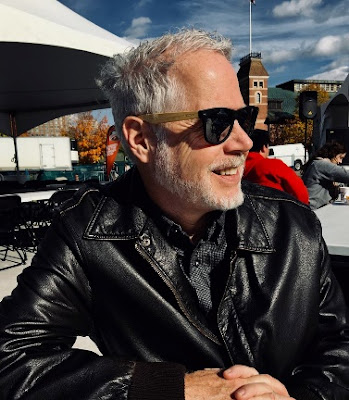 Michael Blouin has won ReLit Best Novel in Canada, been shortlisted for the Amazon First Novel Award, the bp Nichol Award, the CBC Literary Award, and is a winner of the Diana Brebner Award and the  Lampman Award. He has collaborated on recent projects with poet Gillian Sze, film director Bruce McDonald, poet and artist bill bissett and visual artist and author Elizabeth Rainer. He has been published in most Canadian literary magazines including Arc, Descant, Branch, Dragnet, The Antigonish Review, Event, Queen's Quarterly, Grain, Taddle Creek and The Fiddlehead. He has received rave reviews from The National Post, The Ottawa Citizen, The Chicago Institute for Photography and Literature, The Ottawa International Writers Festival, SubTerrain Magazine, Broken Pencil Magazine, Ottawa Magazine, This Magazine, The Telegraph Journal, Lynn Crosbie, bill bissett, Emily Schultz, Susan Musgrave, Marilyn Bowering, George Fetherling, Phil Hall, Sean Wilson, Paul Gessell, Catherine Owen and Lisa Moore. He has served as an adjudicator for The Canada Council, The Ontario Arts Council, The Ottawa Book Awards, Carleton University and This Magazine. His most recent poetry is in the Summer 2017 issue of Arc Magazine and his most recent novel is Skin House from Anvil Press. Forthcoming are material in Taddle Creek Magazine, the anthology The Group of Seven Reimagined: Contemporary Stories Inspired by Historic Canadian Paintings and the novels Dead is the New Alive, and I am Billy the Kid.