The movie is called Frank and it’s about a band that exists on the outside of any kind of mainstream music circle. They are joined by someone who wants to be famous, to write hits, but the members of the band, called the Soronprfbs, are just happy creating their strange music with their small following. Their lead singer, who wears a giant papier-mâché head, is caught in the middle of this struggle— between wanting to be happy creating what he wants to hear (with a rather heavy emphasis on the avant garde) and wanting to be loved by others, wanting to be famous.

This movie should be required viewing for every artist. First off, the songs are great, in my opinion, and secondly, this is a very real struggle, and I think for me was the kind of movie that once I saw it a couple of times, I understood my own struggles as an artist in a deeper way. We’re constantly struggling to make art not only that pleases us, but that we hope will please others so that we can continue to make art so that we can connect with other humans and to the world around us.

I think this is where I try to get a poem to, but I always seem to start with a line or two and go from there. This has not changed in twenty years+ of writing regularly, but perhaps I’ve become more attuned to it, more willing to accept that I need to get writing done versus letting something go. I have always liked the Michelangelo story wherein he talks about finding the work within the marble— I like following a piece of writing rather than pushing it. What fits next, what ideas are emerging? Perhaps this has made me less successful than I’d like, but it’s also what keeps me writing, trying to find that vein and follow it along through a poem.

I do utilize notebooks and am obsessive still about fountain pens. Gabe Gudding, who really got me turned onto them, and my friend Ben Sutton, who enables my obsession with this own— we really got into the tangibility of this method of writing, I think. It’s like driving a car right along the ground with no shocks: you feel the bumps and crevices of the surface and, at least in your own mind, you are part of the process more. This is as opposed to typing, which is an automatic process: part of learning to do it is forgetting the minor moves and concentrating on…I don’t even know. In handwriting, in fetishizing the instrument itself, I don’t know if I’m writing better poems (probably not) but I am enjoying all parts of it more.

Line breaks…forms…the way a poem feels/looks/sits: I used to get a lot of nice words from Forrest Gander while at Brown about my line breaks. I like jarring— I like the feeling that one shouldn’t have a moment to settle into a poem, especially a short one. I hate “natural” line breaks and avoid them as much as possible, going out of my way to recut poems that have line breaks in new ways to avoid pausing at a comma or other break. I guess I want someone reading my work (hi, all two of you) to feel as uncomfortable as I feel all the time. Enjambment already feels like a violent word and I think it’s a way that I push myself and the work I’m producing to be a little bit violent, but hopefully not in an oppressive way of any kind. I’ve been told that I produce a “masculine” lyric, which I don’t much care for, so perhaps this is something I will work in changing in the future. I don’t know if the two are tied, but violence and masculinity seem inextricably linked, so I’d like to be out of the violence business.

I think about math a lot— I’m terrible at it, but I often think about calculus, about functions and derivatives. I see a poem as a derivative of an event or concept, which I view as function. A poem isn’t the speed, it’s the acceleration. I feel like I’m always trying to capture this in my work, to less and less success, generally. But maybe I’m just fine with my giant head on, my ten fans, making music with people I genuinely care about, and singing my heart out. 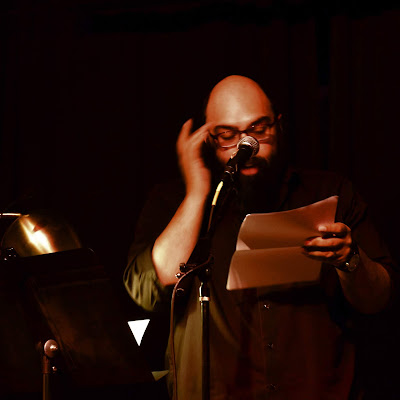