Getting Started: Notes on Writing Poetry

There’s no rhyme or reason for a poem’s beginning. Sometimes, I’m reading something, say a recipe, and a word troubles me. Maybe a set of words. And I want to keep reading, stay focused, but I can’t because these words have fallen in some deep well within me and I sense they’re calling on other words. Lines come up, images. And so it is that when I should be cooking a yummy vegan cake, I find myself writing poetry on the margins of a recipe book. This sort of thing happened to me the other day when I was trying to read a highly technical book on the ways in which external environments (migration, culture, physical environment, etc.) affect grammatical structure in language. I was drinking tea and reading at a café on Bronson street with zero intentions of writing poetry. The letter “s” troubled me with such intensity that I had no choice but to write a poem about it on the inside of the book’s back cover. The poem was about making love. On the surface, it had nothing to do with what I was reading.
I say this but things are always changing. I used to effort to write poems. Now I let the words guide me. Who knows how that will change tomorrow or in ten minutes from now?
Unburdened by the weight of method, I write almost everywhere, including on the side of my bathroom counter, the one beside the toilet. I have a few notebooks; I also use a laptop, my phone and the side of my hand to drop lines. It helps to step away from screens because my eyes have a limit to how much artificial luminosity they can handle. Switching mediums (screen/page/hand) and changing places (couch/writing studio/forest) changes the writing.
A loose structure, a phrase or a word, or the kernel of an idea: all of these can be the start of a good poem or the death row of a bad one. And yes, I’m prompted by the work of other poets or by something I read in a newspaper—always. There is poetry everywhere and the best news are to be found in poems. The thing is, I don’t know why or how something sparks the lightbulb of inspiration. And what set the trail of ink going often seems unrelated to the final text, in such a way that makes it seem like logic and control have little to do with writing poetry.
Sometimes I start at beginning, somewhere in the middle, or work from a scattering of notebook entries. But the truth is, I don’t do well with scatterings. They tend to produce more scatterings.
I pay close attention to form even in free verse, so it’s counterintuitive for me to surrender to scatterings, or so I think. What seems like the beginning of a poem can become its end or its middle, or it can disappear altogether. There is what I think I’m doing; what I intend to do; and ultimately what the poem demands of me. Poetry has a will of its own and I like to surrender to the flow of language. So maybe I do well with scatterings but not with the word “scattering” itself. I haven’t spent enough time with that word yet to be able to say so.
I say poems have a will of their own, which is another way of saying words, punctuation and the way they take up space require the writer’s attention. Line breaks can make or break a poem.

I have a poem that’s forthcoming in Room Magazine titled “Refugee Mouth.” It’s about how our mouths speak for us, even when we don’t say a word. I haven’t a clue how that poem came about. Yes, I was a refugee for five years as a child following the genocide of my people in the 1992-1995 Balkan War. But that’s not what was on my mind when I wrote it. I admit to having thought about the cost of dental care and how I’d run out of insurance. But the poem isn’t about that either. Somewhere in the dark ocean of my/our unconscious, the thought of dentist prompted me to pen the poem, which is situated on a plane where past and present happen at once. It’s difficult and possibly even misleading to write about authorial method when language sometimes seem to have as much agency over us as we do over it.
I opened by admitting to having no method and then I said I pay very close attention to form (I am even meticulous when it comes to form and euphony). Am I contradicting myself? Make no mistake: the “I” who speaks here is plural. Language is a shared human phenomenon and so long as my craft involves words, I am indebted to, influenced by and in conversation with the writers whose work I have read (and even the ones I haven’t!). And more: the winds, ground, animals and plants—the way the light falls on the page or my level of thirst or hunger as I write—all of these have their hands in what is penned, whether in poetry or prose. 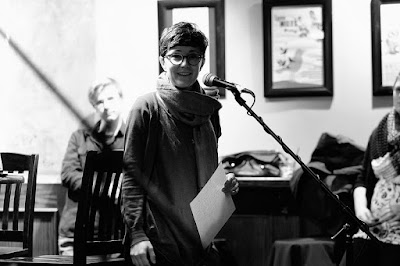 Sanita Fejzić is an award-winning poet, writer and playwright based in Ottawa. Her novella, Psychomachia, Latin for “battle of the soul,” was shortlisted for the Ken Klonsky Prize and the Canada ReLit Awards.  Her first play, The Blissful State of Surrender, a dramatic comedy about a Bosnian-Canadian family was workshopped by the National Arts Centre in March 2018 and again at the Ottawa Arts Court in 2019. (M)other, a poem that was shortlisted for the 2018 CBC Poetry Prize will be converted into a children’s story in English and French; it is forthcoming in 2020 with New-Brunswick’s Francophone press, Le bouton d’or. Fejzić is currently completing a PhD in Cultural Studies at Queen’s University.