We Who Are About To Die : Pearl Button 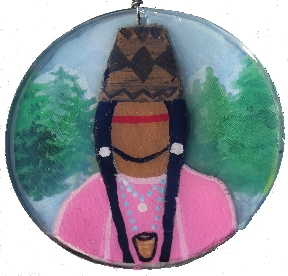 In case you were wondering, that headshot is not Pearl, but it is the medallion she wears, that was painted for her by a family member of another family member, now deceased. Pearl wants you to know that the first piece is an excerpt from the serialized Tumblr book 13 dark moons. Tarot and dream work are skills acquired now many decades ago. Alchemy came later, but long enough ago to have sunk into the dark of forgotten knowledge. That’s a good place for magical knowledge to be. That way it can come and go as it pleases, organizing surprise parties and welcome-home hooplas for the unsuspecting ego. She also wants you to know that the second piece “later when I lived very differently” is part of the developing project mentioned in the interview called sticks and bones. The image recently published here at h& (creation myth #379) is part of that manuscript. Each of the primarily textual pieces is fronted by a quote from an anthropologist, a philosopher or scientist. The poem that follows makes a conversation with the quote. The two argue about what’s real and how to define things. That’s the world Pearl lives in. Contested ground. A place between two worlds where both have left indelible marks. The world of pidgin, surrounded by arguing parental languages.

Where are you now?
In the moments of writing this I am in my car (which is also where I live). Once I want to email this text to Mr Whistle, then I’ll go to a place where I can access WiFi, and boom there you go. Where is my car? At Muckleshoot. It’s an Indian Reservation in Washington State. There’s Sla Hal this weekend. Next week I’ll be somewhere else.

What are you reading?
I’m the kind of person who reads many books at a time. Because I have a limited carrying capacity, I don’t have a lot of paper-type books with me, but one I do have at the moment is a book of essays on poetry edited by Tom Chivers called Stress Fractures. Other than that I have an e-reader and the top 3 hits on that are 1491 by Charles Mann, Thinking without Words by Jose Luis Bermudez and The Terrors poetry by Tom Chivers.

What have you discovered lately?
Mostly that my bones are no longer a fan of cold and damp. However, I am on a 6-month long research trip, and I’ve been digging around in local small-town archives and I’ve discovered tons of small things about how people are with difference. Like, there was a place about a month ago that recorded its own little-town creation mythology in a staple-bound book they sell in the local museum. In it there is a story about how a local tribe believed that when they’d developed enough as human beings they’d become white people. Heh. I was laughing so hard the librarian had to come in and ask me to share. I did. I frakkin love research, because people delight me in what they are willing to believe.

Where do you write?
Depends on the weather. Somewhere quiet if I can. I like semi-industrial areas in cities, rest stops in the US, abandoned quarries, old mine-heads, places like that. If it is too cold or too wet for my tech, then a public library or a Starbucks.

What are you working on?
I’m researching recent developments in a Native American gambling game that is called Sla Hal on the Pacific coast, but is also known as bone game or stick game or hand game. It’s a very big deal in the Pacific North West and neighbouring plains (in British Columbia, Alberta, Saskatechewan, Montana, Idaho, Washington State, Oregon, California). There are small games and enormous tournaments and with the advent of easy roads and cars, they go all year round, although less in winter. Hundreds of people can play at once, and since players use drums and rattles, it can be very loud. The game is played with traditional songs that sound unlike anything Western European. One big current project is to write a series of semi-autobiographical poems to the rhythms of stick game songs instead of the Euro-meter of much poetry today and still try to make them intelligible to non-Native readers. That series has a working title of sticks and bones. These poems are as narrative as I get.

I’m also in the editing stage of a project called trembling underfoot which operates in a surreal circus of a world. It came out of a dream and a nightmare I had. The quartet of poems is not (not in any way) narrative poetry. If you approach it as if it were a dream and you wanted to make sense of it on waking, and you can accept Uncertainty as a Principle of Meaning, then you’ll be fine. Do you know Anne-Marie Albiach? I love her work. It’s a bit like that.

I’m also contemplating a series of witchcraft poems based on a lunar month. I’ll spend a good part of September out on the Palouse, which is this scarily beautiful plain that rests on an ancient basalt flow which itself rests on what used to be the ground on which the ancient plants and animals lived. Now the Snake River and the Columbia run along/through it. I’ll watch the moon rise and set, rise and set and then dream. That’ll become a project. It may or may not be like the one that resulted from a dream and a tarot reading I did a while back, which is now published as a serial book online at Tumblr and called 13 Dark Moons, a public alchemical working. 13 Dark Moons is full of sigils that were created for the purposes of the working, because I really like combined forms.

Have you anything forthcoming?
I had a book released with Dancing Girl Press in 2016 called this is not a love song to the dark. Since then I’ve been concentrating on the projects I told you about above. I do have a manuscript called accidental existence which has been languishing in cyber form. Being on the road is not conducive to large-scale editing work and frankly I’d kill for an editor capable of parsing experimental work who also acts as if cross-cultural lines are not meant as a prison. Until I resolve that, I probably won’t publish as much as I have in the past, but just keep writing, learning about stick game and wandering around watching the moon.

What would you rather be doing?
I would rather be travelling in a van with a bed, solar electrics, a table and a reading chair, but what I can afford is a 4-door sedan so that’s what I live in.

There is a peace in the darkest time of winter. These days the valley billows in the dark. Shadows burgeon and bloom. Dark has its finest growing days here. Crops of dreams will be dried, stored for the worst of the sun-blasted days to come. Here in the peaceful valley of winter, in the dark of the moon, understanding unbuckles from the sun's direction. Ecstasy harbours here. This is the chimp returned at last to her forest. This is the isolated elephant finding her sister after 30 years of performance art for peanuts.

Mind roams freely in the unwound yarn of the year. Here thought's symbolic DNA zips together; creates sulfur's seeds for the year to come. First Matter bears in the dark. Salt joins sulfur in spinning life's threads. Mercury is the first Weaver known to the alchemist. Here in the first dark moon, the inner and outer weave each other into the world.

The mountain creaks in the dark. Small stones hide under the lowest boughs of snow-bearing pitch pine. Strung on sinew between cones and clouds, white blades clink against the setting moon. The badger sleeps but the cougar leaves tracks on the water. It is between the marks left by left front toes that truth for the year rolls laughing.

Six thoughts in the dark. Six needs divided become 12 wants. Heat makes and breaks the sweat stones. This is the reason for the alchemical fire. Going into the dark of the sweat lodge, hidden stones seek knowledge best suited to the wide skies of a pendant day. Therefore, must all stones be counted, put through the fire.

Let it be known: All that long sun-high-sky, the moon rides hidden above the horizon, slides above the stones, the snow, the moving mountain. To know what comes from beyond the valley, find three blades that ride with the dark moon at noon. To know what will rush past without pausing, find the three that pierce the clouds ˈround the midnight moon hidden behind the earth. Once to hand, hang them all clinking on a line and sing with them. Sing until the song falls crystalline and glistening from your mouth into the snow, then release it, fin flapping in the winter waters circling under quiet cat feet.


Later, when I lived very differently, I realized how alien waist-high living was to a Micronesian woman whose household life is spent on the floor.

Most of the time you get no real
choice about sleeping. Not when or how
long much less where. Catch authority’s
eye stretched celestial on the sidewalk
even languid on picnic-table beds at night
rest stop on the I 5 & trouble will snap
your Achilles, make you limp the payne's gray
of whatever you call this
temporal core of sleeping civility.
Stay at home for that. All those sleep
classes for the insomniac tell you tricks
how to slip transparent, down past the din
of red ochre, closed eyelids
against urban light still burning

but me, didn't work, got so tired my head blew left
white noise cauliflower ears battered, burnt
sienna static like a fist full of nettles
drove up from the river road
done with trying for home, hurtled instead, rabid
like a thirst, like petroglyphed rocks swimming
dog paddle circles under ultramarine
grinding clouds into the brittle
rind of the late afternoon

nose to ancient red eagles and traveller
notifications written on stone, arms nibbled
by basalt crumbed out onto the pine
needled soil, slept black
planed out the lamb's quarter, the kinnikinnik
woke after 10 hours
all the way through the dark and back
into the light, curled up the flattened horizon
of my spine to find coyote scat not far
from my feet and the car, engine cool
waiting for me to come to my senses

Email ThisBlogThis!Share to TwitterShare to FacebookShare to Pinterest
Labels: Pearl Button, We Who Are About To Die