I love a good detective story — dark clues hidden in dark places.  I love the pace them and how they unfold, each clue falling into place with a satisfying thud, until the whole picture is revealed.  For me, writing poems is a bit like that. I write scattered images that I often don’t understand, and then piece them together to figure out what I actually think.

What do I actually think about the process of writing?  It changes so often it’s hard for me to tell.  But today, I can give you four images.

1.      A friend has some things he wants to say to me about my writing. We are two beers in, sitting across from each other at a sticky pub table when he tells that one of my poems made him cry. “It just made me so sad that you’d ever felt that way,” he says. I don’t know what to say because I have felt that way, but also, sort of not. You know that part of your brain that makes you tolerable to others?  That part of your brain that, when things are bad, reminds you that you also live in a world filled with people who love you and also pizza?  I try to write with that part of my brain turned off. Poems don’t need to worry about being tolerable.

2.      Is the word “accessible” a compliment? I can never tell. It feels, so often, like when girls in Grade 8 tell you they like your shirt.  My husband plays video games, and sometimes I try to play, too, but I didn’t grow up with them, so even if I know what I’m supposed to do, I don’t have the hand-eye coordination to do it.  I just haven’t put in the hours. This is my point. If there’s something poems are trying to communicate about the world or language or any of the other things we claim to care about, is it inherently better to communicate those things solely to people whose parents bought them a Nintendo back in the 80s?

3.      I’m a poet because I have to walk everywhere slowly. I have a rare lung condition and rheumatoid arthritis, so I move at the pace of something ridiculously slow — honey, turtles, watched pots. When I was 16, I walked up the tallest peak in the British Isles with my father.  It took me all day.  I’d walk fifteen steps and then stop, fifteen steps and then stop. When we were almost at the top,  I paused for about the thousandth time, and we happened to look down. Just below us, were tiny rainbows scattered in low-hanging clouds. Poetry takes its time like I take me time, and allows me to see things I might otherwise have missed.

4.      If I’m honest, I am a sporadic writer at best. When things are going well, I can write a poem a day.  When they aren’t I sometimes don’t write for months. I’m a flighty person. I make New Year’s resolutions I don’t keep, I bail on people to go home and do nothing, I can’t not eat the last cookie. My lack of writerly discipline used to bother me. It was the subject of many broken New Year’s resolutions.  Because those messages are out there, aren’t they? You have to show up to your desk. You have to have the burning desire to create poems at all times, or you have no business calling yourself a writer. I don’t know. All that may be true. For me, it’s true that the poems have always been there when I needed them, sort of like a coaster at a fancy person’s house. 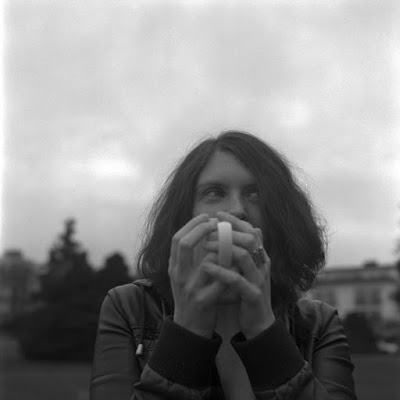 Laura Farina is the author of two collections of poetry Some Talk of Being Human (Mansfield Press) and This Woman Alphabetical (Pedlar Press), which won the Archibald Lampman Award. She lives in Vancouver, where she writes poems, teaches creative writing and waits for the rain to end.

Email ThisBlogThis!Share to TwitterShare to FacebookShare to Pinterest
Labels: Laura Farina, On writing