Talking to Myself
Lesley Buxton

Some years ago, I was reacquainted with a friend I’d known as a teenager. “Do you still talk to yourself?” he asked in one of our initial conversations.
“What? I never talked to myself.”
“You did.” Despite my denial, my friend’s observation concerned me.
Sometime afterwards I was having dinner with my husband, Mark and I made some casual remark and he didn’t answer.
“Mark?”
“Were you talking to me?”
His question annoyed me. Who else could I be talking to?
“I just wasn’t sure,” he said. “I thought you might be talking to yourself. You do it all the time so I’m never sure if I’m supposed to answer or not.”

Since then I’ve begun to notice I talk to myself a lot—even in public. Not long ago I was at the Value Village and I caught myself considering out loud if I should buy a leather jacket I’d found. It scared me. After all it’s one thing for friends to notice but another to be regarded by strangers as that odd middle-aged lady at the thrift store babbling to herself.

Recently I saw the movie, The Lady in the Van based on the writer, Allan Bennett’s relationship with Miss Shepherd, a homeless woman who resided in her van in his driveway for fifteen years. In the movie Alex Jennings plays two versions of Bennett, the writer who watches Miss Shepherd from behind the safety of his desk and the other Bennett, the one who engages with the world. Throughout the story the two of them frequently discuss Miss Shepherd’s strange behaviour from very different perspectives. Early in the movie the writer Bennett explains, saying that writers are always talking to themselves.

I liked the movie, but it was the idea of the writer being divided into two distinct characters that most struck me. I’ve felt that all my life but have never been able to articulate it. Lesley the non-writer is happiest at the pub with a pint in her hand and surrounded by people who know how to tell a damn good story. Whereas the writer in me likes nothing more than to spend her day alone writing in her pyjamas—and God forbid anyone disturbs her —she has none of the social graces of my other self. She’s grumpy, with bad breath from drinking too much coffee and is liable to ignore other people if they try to talk to her while she’s thinking. But in truth, she’s the nicer of the two, less judgemental, more prone to empathy and, best of all, able to see a story from all angles.

For the past two years I’ve been working on a memoir based on my blog, Fall On Me, Dear. It tells the story of what it’s like to survive one’s only child.  Before my life changed so radically it was never my ambition to write a memoir. I wrote short stories—long before that I was an actor. In both endeavours my enthusiasm was based on the same desire, a need to interpret the history behind a character’s actions. I love trying to decipher a person’s motivation, all those layers that make certainty so elusive. This is why I love gossip, especially when I hear the same tale repeated by different sources. It amazes me how a story can be moulded by perspective. It’s like collecting recordings of the same song sung by a variety of artists. Take the Leonard Cohen song, Hallelujah for example. None of my friends can agree on who interprets it best.

In memoir, the only voice is your own. This is daunting. Yes, I know the bones of my story, but for the most part I’m forced to rely on my memories for guidance and like human nature these are fragile. For this reason I spend a lot of time questioning myself, analysing my actions, seeking truth as if it were black and white and not hidden under the murkiest of greys. I’ve always been the queen of self-doubt. A quality that has wreaked havoc in my personal life, but served the writer well. Throughout this process, there have been days when the sound of my own voice has driven me crazy. Days when I would’ve given anything to be writing a story where I was not a central character. I say character, as the only way I have discovered to write about myself is to employ the techniques I’ve learned by writing short stories. This means leaving space for the reader.

The odd thing about writing a memoir is there’s an assumption that it’s cathartic. Over and over again, I’m asked if I’ve found this process therapeutic. This notion makes me uneasy. After all if therapy was all I required I could simply keep a journal and spew my feelings onto the page. Sure, this might be healing for the non-writer, but soon the writer would appear—out of the two of us, she’s the strongest and most relentless. Her concerns reach far beyond the small and personal to where she hopes the intimate will meet the universal. By aiming for this, if the timing is right and she’s fortunate, she joins the Babel of other writers all lost in conversation with themselves. 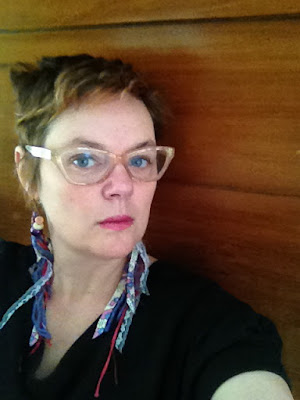 Lesley Buxton studied theatre in London, England, and travelled extensively before settling down in Penticton, British Colombia. Her short stories have appeared in a variety of reviews including: The Antigonish Review, Hazlitt, The Fiddlehead, and The New Quarterly. Her blog Fall On Me, Dear, chronicles the last years of her daughter’s life. She has a MFA in creative nonfiction from the University of King’s College in Halifax, Nova Scotia. She’s working on a memoir, One Strong Girl, based on her blog.

Email ThisBlogThis!Share to TwitterShare to FacebookShare to Pinterest
Labels: Lesley Buxton, On writing

I really enjoyed reading this, as everything you write. Thanks for sharing with us. I can't wait to read your book,
Cheers, Andrea