My literary community in Vancouver seems to rotate around and on social media – or maybe that’s just my epicentre. It’s a question worth asking myself beyond lamenting writing time lost to gif giggles and memes. In truth, social media has enabled me to do far more writing and creating with other artists than I would have managed without the internet and it has given me an easy channel to connect with writers and editors with whom I can exchange thoughts and eventually, poems.

Social media is where the bulk of calls for submissions I know about are shared and spread. It’s easy to retweet a call from a literary journal – publications (every one of them underfunded and understaffed compared to the amount of labour they face) work hard to reach readers. But their submissions may be sampling only one end of the pool of writers. Who is not part of the conversation?

We know lack of access to technology isolates people, but how is it skewing our literary community? Especially in Vancouver, one of the cruelest cities in Canada for income inequity and unaffordable housing?

Editors, presses and publishers might expand their ring of writers and dilate the experience of the literary community by considering e-privilege. Where are most submissions coming from? Are they weighted towards a certain population? Why? Who aren’t they seeing in submissions?

In September 2016 I participated in a panel on inclusivity in publishing with three smart and active writers who are pushing against racialized and genderized borders in publishing. [1] Jónína and Chelene and Jen made the panel accessible, permeable and conversant using their multi-layered experiences as writers and editors as reference points. I spoke about a slant form of exclusion: how reliable access to computers and sufficient Wi-Fi is a barrier to many of the most committed writers I know.

Most Thursdays since 2008 I’ve spent the afternoon writing with Thursdays Writing Collective,[2] a non-profit writing group for residents of the Downtown Eastside. Many of my cohort can’t count on steady, private, convenient computer availability. I don’t have to leave my house to find wifi or mitigate restricted time slots for public computer use. I have my own computer and when my laptop crashes I can take it to the repair shop and get it back in a day but that’s because I have a credit card, transportation to and from, the mental bandwidth to deal with the frustration of computer problems. I can more or less drop everything - besides my kids - to prioritize my computer.

If a writer living in an SRO (https://dtescollaborative.org) can acquire a laptop they may not have the time, connections or quiet they need to figure out saving and backing up, a confounding experience for me even when I am rested, fed, focused and undisturbed. If belongings or housing aren’t secure, the writing isn’t either. Theft and damage of laptops or jump drives means losing novels, submission records, bios, author photos, literary CVs, manuscripts, editing conversations, journals – imagine all of that hitting you at once. Imagine it happening repeatedly. These practical difficulties in the writing life are a colander, straining the breadth and depth of voices from a fuller literary community. Award-winning poet Henry Doyle (https://vimeo.com/178824020), who periodically struggles with Wi-Fi issues told me on the phone, “It’s really hard to be out of the loop. I don’t know what’s going on or how to get in touch with people. I feel like I’m missing a lot.”

When John Asfour and I coedited V6A: Writing from Vancouver’s Downtown Eastside (Arsenal Pulp Press, 2012) our mandate was to create an holistic picture of the neighbourhood by yoking published and unpublished authors in one cross-genre anthology. We had to figure out alternative ways to connect and communicate beyond and outside of the pool we knew how to reach. How do you reach people you don’t know how to reach? We tried our best by asking everyone we could for suggestions.

For starters, we accepted handwritten submissions. We established a box at the library to accept texts so people didn’t have to pay postage to submit their handwritten texts. We sent a submission call out on radio repeatedly. We passed out handbills, published notices in newsletters, handed out posters and asked people to use word of mouth to spread the call. We contacted outreach workers, mentors, volunteers and asked them to share the info. I posted and handed out my cell number so writers could ask me questions or arrange to submit their pieces.

We used social media to target organizers and activists who could print out the call and share it face to face with people who might be interested. We did a good job but there are undoubtedly many venues of contact that never occurred to us.

Other ways to bridge the digital divide are common sense, and contagious. After writing long hand in class, it’s a frequent occurrence for some TWC writers type up writing for the people who don’t have computer access. This need has at times been so crushing that Thursdays Editing Collective, part of TWC, has held “type-up” sessions after class where we quickly convert handwritten texts into digital forms that are easier to edit and preserve.

A few years ago WORD Festival (which also programmed the 2016 inclusivity panel) asked what kind of event was most needed in the Downtown Eastside. Since then they have held free public Type Up events at Carnegie Community Centre where people can bring ten pages of writing - short stories, poems, letters or legal documents - to be typed on the spot, lightly spellchecked and turned into a doc/cd/printout for free.

When we connect with a writer who is offline some or all of the time we can ask what the challenges are, what they need, what would make things smoother. Maybe they need help getting their work to one of the journals that only accepts through the online site Submittable. Maybe we ask our own publishers and editors what they need in order to hear from people outside the standard stable of frequents.

Other hacks around e-exclusion abound, and we’d do well to share the info with each other to make a more robust community. We need to hear from the creators who aren’t at the epicenter of the update matrix.

After the panel on inclusivity an audience member, Jessica Key, contacted me on Twitter to ask more questions. She wrote a paper for her MPub class you can read here: https://eleekg.com/2016/10/17/how-can-publishers-be-more-inclusive/
It’s not lost on me Jessica and I were able to do this thanks to social media but like any other privilege, e-privilege can help dismantle itself.

[1] Sep 25, 2016 at the WORD Festival in Vancouver programmed by Natasha Sanders-Kay for Magazines BC. My co-panellists were Jónína Kirton and Chelene Knight and the panel was mc’d by Jen Sookfong Lee. http://www.magsbc.com/magsbc-presents-inclusiveness-panel-word-vancouver
[2] I started Thursdays Writing Collective in 2008 and passed the directorship in September 2016 to Amber Dawn. www.thursdayswritngcollective.ca 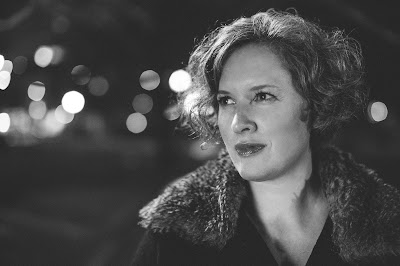 Elee Kraljii Gardiner [photo credit: Christoph Prevost] is the author of the book of poems serpentine loop (Anvil Press, 2016), which is going into a second edition. She is the co-editor with John Asfour of V6A: Writing from Vancouver’s Downtown Eastside (Arsenal Pulp Press, 2012), which was shortlisted for the 2012 City of Vancouver Book Award. Elee founded Thursdays Writing Collective, a non-profit organization of more than 150 writers in Vancouver and she is the editor and published of its eight anthologies. Her efforts to foster writers earned the 2015 Pandora’s Collective BC Writer Mentor Award. She is originally from Boston and is a dual US/Canadian citizen. [Ed. note: Today is also her birthday. Happy Birthday, Elee!] www.eleekg.com