The breaking point comes one afternoon, while you are sitting on the floor of your apartment, half a world away from where you were born.  A stupid song comes on, a song you don’t even really like but that reminds you of her because you think she liked it. Or she would have. And suddenly you’re bawling.
What happened? You never used to cry like this. You never used to sob. Back then, the tears just streamed down your cheeks of their own accord. Back then, tears felt cheap.
It was easier when you couldn’t cry, when the wound was so raw that your system ran on too much adrenaline and didn’t realize that it was slowly killing itself. There was that awful emptiness, but you almost didn’t notice because it was an absence of sensation. There was always that distant whisper in the back of your mind that there wasn’t supposed to be that gaping a hole, that that hole wasn’t a manufacturer’s defect, it was your own carelessness, or clumsiness, or forgetfulness that lost the missing part (piece? peace?). You left it somewhere - discarded as useless - because it was broken beyond repair.
It made no sense to try piecing it back together; it would take too much effort. Easier to just send away for a replacement, for the spare part. For a spare heart.  Eventually, your request is denied: Sorry, that particular product has been discontinued. We don’t make them like that anymore.
You want to go back to find all those pieces, put them back together so that you’ll finally be whole again. But as you collect the shards – and they are shards: ones that slice you open as you fumble to pick them up and sting with unusual intensity for wounds so insignificant – you realize that there are too many missing pieces.
You don’t know where you left them, where they slipped out of your pocket or off your tongue, forever lost because you discarded them like breadcrumbs along the way, certain they’d help you find your way back to yourself. If that was ever something you wanted to be again.
Now, you want to be yourself again, but you can’t because you’ve lost too many of the pieces. That self had a home. That self had a mother and a father and a sister and a whole heart. And you have none of those things.
No one knows how to help you. And you have no idea where to start looking for the answers that seem like they should be obvious.
There’s no manual on grieving, not one that isn’t full of shit or based on some self-interested lie that tries to convince you that you can be whole again, that you can be you again.
How can you be you without them?
No one’s honest. No one tells you, straight up, that you’re never going to be the same again. (You can understand why no one tells you this at first – when you’ve lost everything, the last thing you need to be told is that you’ve also lost yourself… and that you just don’t know it yet.) They tell you life won’t be the same, but that’s just growing up, isn’t it darling? That’s what happens. Things change. That’s life, they say – they still have both their octogenarian parents, and their middle-aged siblings and their perfect, indestructible teenage sons.
They never had to do this.
They never had to lose this.
Their lives were never changed so inalterably in seven weeks as to be unrecognizable.
The irony is that the only person you are convinced would know how to help you is the reason you feel this way in the first place.
You try not to think like her. You try not to be like her. Even if it might help, you deny the inevitable because you always swore you wouldn’t do it. You wouldn’t follow in her footsteps. You wouldn’t become a writer. You wouldn’t become your mother.
But you did anyway.  And maybe that’s a blessing, because you sure as hell aren’t yourself anymore. 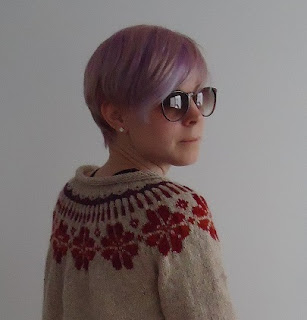 Mer Brebner is the daughter of celebrated Ottawa poet, Diana Brebner. She studied international politics, technical theatre and paramedicine. Growing up, she vowed never to become a writer. She currently lives in Gatineau where she is working on getting a novel and a memoir published.

Email ThisBlogThis!Share to TwitterShare to FacebookShare to Pinterest
Labels: Mer Brebner, On writing

Punch in the gut honesty. I dread this day in my life, but it will come. Lucid and vibrant. "Nicely put" seems trite.