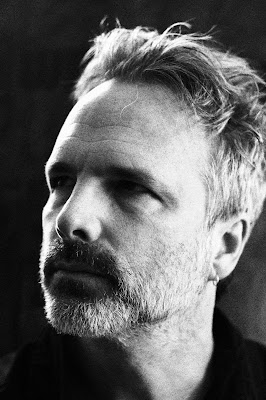 Kyp Harness is a singer-songwriter known for the poetry of his lyrics. He has released twelve independent recordings.  He is also the author of three books: The Art of Laurel and Hardy (2006) and The Art of Charlie Chaplin (2007), which were both published by McFarland in the US. In March 2016, he will release his thirteenth album, Stoplight Moon. In May, his novel, Wigford Rememberies, was published by Nightwood Editions.

He performs in Ottawa on Friday, June 17 as part of The Factory Reading Series' pre-ottawa small press book fair event at the Carleton Tavern.

1 - How did your first book change your life? How does your most recent work compare to your previous? How does it feel different?
I've written several other novels, as yet unpublished -- this one is definitely the most poetic-feeling of my books, and it feels really good to get it out there.

2 - How did you come to songwriting first, as opposed to, say, poetry, fiction or non-fiction?
I always did write, and to me songwriting is another way of writing poetry that I could get people to listen to - or so I thought.  I guess I wrote fiction before I wrote songs, although I always did write songs in my head.  And before that I wrote and drew comic books and comic strips, way back to my early childhood.

3 - How long does it take to start any particular writing project? Does your writing initially come quickly, or is it a slow process? Do first drafts appear looking close to their final shape, or does your work come out of copious notes?
I guess I start writing and see if it grows from there.  It's always different.  This new book seemed to accumulate and simmer. I write mostly just from inspiration - either it comes or it doesn't - and the end product isn't too different from what first gets set down.

4 - Where does writing usually begin for you? Are you an author of short fragments that end up combining into a larger project, or are you working on a "book" or "song" from the very beginning?
I think the new book came from short fragments, but i find I like to give myself different goals for fun.  So I've written a couple books where I knew just what I wanted to do and bet myself on whether I could achieve it or not.  With songs, it's like I go unconscious to write the music, so it's mostly created when I'm out of my mind.

5 - Is performance part of or counter to your creative process? Are you the sort of writer who enjoys performing?
Yeah I do like to perform, or at least it feels natural to me - there's always a pulse in what I do - I'd like to even perform parts of this book.

7 – What do you see the current role of the writer being in larger culture? Does s/he even have one? What do you think the role of the writer should be?
Like the slogan in the ads for the Army used to say - 'Be all that you can be' - and to tell the truth exactly from where you're standing, geographically or otherwise...

8 - Do you find the process of working with an outside editor difficult or essential (or both)?
I found that Silas White, the editor for this book, was excellent and sensitive and has great taste.

9 - What is the best piece of advice you've heard (not necessarily given to you directly)?
"Get out of your way!'

10 - How easy has it been for you to move between genres (fiction to songwriting to comics)? What do you see as the appeal?
To me it's all writing, or creating - some of my songs are like short stories or novels - I try to keep open to the inspiration of whatever might happen, not to label anything - it's good to just keep moving

11 - What kind of writing routine do you tend to keep, or do you even have one? How does a typical day (for you) begin?
Not much of a routine!  I do stay up late at night & find I do a lot of stuff then, when everything is quiet.  A day begins with me rolling out of bed and drinking a lot of coffee.  I try to grab time when I can, a bit more easier now than when my kids were young.  I might not do anything for a long time and then do a lot.

12 - When your writing gets stalled, where do you turn or return for (for lack of a better word) inspiration?
I walk a lot, I find that I need to do that - I walk long distances, and in the city you can see a lot.  Natural weather and human-created weather -- it's all out there.

14 - David W. McFadden once said that books come from books, but are there any other forms that influence your work, whether nature, music, science or visual art?
I like films a lot and wrote 2 books on films for McFarland in the US, The Art of Laurel and Hardy and The Art of Charlie Chaplin.....Van Gogh, Rachmaninoff, Nelson Riddle, the poetry of Allison Grayhurst, Elizabeth Cotten.

15 - What other writers or writings are important for your work, or simply your life outside of your work?
Ecclesiastes, Dostoevsky, joyce, Miller, Kerouac, Wolfe, Woolf, Roth, Blake, Walt Disney, others too numerous to mention.

16 - What would you like to do that you haven't yet done?
Make a living.

17 - If you could pick any other occupation to attempt, what would it be? Or, alternately, what do you think you would have ended up doing had you not been a writer?
I honestly have no idea.  I'd like to be a clown or a comedian, but maybe those are as impractical as what I'm doing now.

18 - What made you write, as opposed to doing something else?
I think it's the desire to communicate to assure yourself you're not insane and completely out of step.  I don't know if that practically works, though.  But at least you get the sense that even if your ideas are out of whack, you've at least communicated them as completely as you're able.  ultimately I've got no choice, I just can't help myself.

McCabe and Mrs. Miller by Robert Altman -- hadn't seen it before -- beautiful film.

20 - What are you currently working on?
A couple different writings, one's a short comic novel, and the others about children.  And always with the songs and the music....!