Like many writers, I came to San Francisco from graduate school, without any real training in doing anything, and I took a series of temp jobs.  This will date me, I remember the temp agency asking me what office machines I was familiar with, well, I had never actually been in an office, but I said, flatly, “all of them.”  “Do you know the ten-key machine?”  “Of course,” I said, rather coldly.  I wonder if many of you now know what a ten-key machine is . . . it’s like this accounting thing—but I didn’t know it then.  They sent me to this job downtown, I think for Pillsbury, and placed me in a room with a ten key machine and about a million pages of documents.  I walked out and said to the woman in charge, “I don’t know how to use that thing.”  My agency called and said, “You swore you knew how to use a ten key machine,” well it all came out that I thought they were referring to—you know, those touch-tone phones, with the ten keys, which I knew quite well.

We are at a crossroads now in which previous conceptions of history seem to be collapsing like houses of cards.  Poetry must have been based on the idea of history as progression, not just the eternal cycle on Finnegans Wake that Vico posited, that civilizations all accrete and then dissipate as does the human body.  At least I think so, for it’s hard to imagine the act of writing poetry without imagining that people will read it in the future.  Was it Osip Mandelstam who had that piece satirizing a friend who dedicated all his poetry to posterity, saying that the future is a ghost and what we write today won’t be anything a ghost can relate to?  The truth is we don’t know how to write to death, though some poets have tried.

Marxists must be deflated as the age of the Anthropocene kicks in.  If Marx predicated that the capitalist disaster is predicated on the exigencies of production, there was always an optimism in his thought—for some reason—he is perhaps the most hopeful of philosophers, believing that once we could see the outlines of history clearly, we wouldn’t repeat it.  In the 20th century, George Bataille took  the opposite view, writing that capital is instead managed and fed by the exigencies not of production but of consumption, and so that’s why our news is so bad, overconsumption, nine billion people on a shrinking planet, David Bowie took up the theme forty year ago, closer to Bataille’s time than to ours, “The earth is a bitch, we’ve finished out news, homo sapiens have outgrown their use, all the strangers came today, and it looks as though they’re here to stay.”

In San Francisco we all practice, rich or poor, a modified version of the famous paradox defined by the Italian communist Antonio Gramsci in his prison notebooks: “Pessimism of the intellect, optimism of the will.”  There we’ve been living in an existential way for a hundred years or more, ever since the big earthquake that leveled the city in 1906.  Nothing’s good for very long, soon we will be swept out the sea, and I think it had given SF poetry a special character, the nearest Americans have gotten to Blanchot’s recipe for the “writing of the disaster.”  In the Bay Area there was a conference at UC Santa Cruz in 2014, and the keynote speaker, Ursula K. LeGuin the science fiction writer, admitted that though she could no longer be, as she had been in her youth, an optimist about the future, she still couldn’t bring herself to the edge of pessimism.  You still have to hope, she said.  I suppose otherwise you’d go mad.  Whenever anyone comes to San Francisco, I tell them that “while you are here you’ll experience an earthquake, hopefully not a devastating one, but you’ll be out walking and you’ll have to crouch down and touch the pavement. “ And maybe that perception of possible danger has kept us honest a little bit.  We’re at the end of the continent and the next stop is the ocean.  We came to it for a reason.  Jack Spicer, the California poet on whom I have written so much, often pictured in his poetry and fiction a post-human society in which everyone has disappeared and only “aimless signals” bounce back and forth between our meaningless satellites and the surface of the ocean.

This ocean, humiliating in its disguises
Tougher than anything.
No one listens to poetry. The ocean
Does not mean to be listened to. A drop
Or crash of water. It means
Nothing.
It
Is bread and butter
Pepper and salt. The death
That young men hope for. Aimlessly
It pounds the shore. White and aimless signals. No
One listens to poetry. 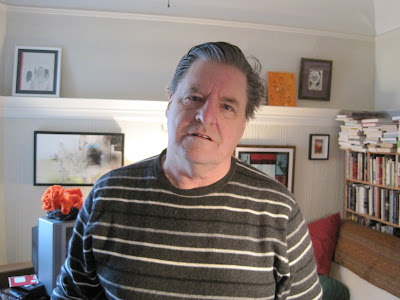 Kevin Killian [photo: Ted Rees], one of the original “New Narrative” writers, has written three novels, a book of memoirs, four books of stories, and three books of poetry.  For the San Francisco Poets Theater Killian has written forty-five plays, and the anthology he compiled with David Brazil—The Kenning Anthology of Poets Theater 1945-1985—is the standard book on the subject.  Recent projects include Tagged, Killian’s nude photographs of poets, artists, writers, musicians, filmmakers and intellectuals; and forthcoming, with Dodie Bellamy, The Nightboat Anthology of New Narrative Writing 1977-1997.

Email ThisBlogThis!Share to TwitterShare to FacebookShare to Pinterest
Labels: Kevin Killian, On writing