For the last decade or so my main way of writing has been to assemble phrases into a poem. These phrases come from my own notebooks, from books I am reading at the time (sometimes almost grabbed at random; at other times phrases I’ve jotted down whilst reading), from songs and CD covers, from newspaper and magazines, from in my head… a kind of ongoing diary of experience, reading and observations catalysed and changed by writing processes and my own creative and editorial process, which works towards poems that ask more questions than give answers, using collage and procedural writing as well as more traditional inspiration and personal confession.

Charles Bernstein has suggested that ‘Poetry is turbulent thought, at least that’s what I want from it… It leaves things unsettled, unresolved – leave you knowing less than you did when you started’, and my poems explore the world by association and analogy: the ‘voices’ or polyglossolalia of my work are present in the way the poems have been constructed, they accumulate meaning by juxtaposition and ordering; ‘conversation’ and ‘conference’ are inherent in the way themes may continue through sequences, series or individual poems. Joseph Conte suggests that ‘Serial and procedural forms provide alternative and complementary responses to postmodernity. […] The divine order as a single voice of authority has withdrawn to be replaced by a cacophony of channelled voices, or by no voice at all […]’

Themes emerge, tentatively appear and disappear in my poems. I try to keep my vocabulary everyday and readable, but distort syntax and linearity to make surprises, jumps, leaps of the imagination. What I read, see and engage with around me often gets directly collaged into poems, so it’s very personal. It’s my voice because I made it, the process is much more refined than ‘collage’ or ‘cut-up’.

This does, of course, means the reader has work to do, not least in relating their own reality to the poems presented to them. The poet Dean Young has an interesting response to an interview question about the possibilities of misunderstanding:

Do you think your poems are defined by misunderstanding?

I think they’re very much about misunderstanding.  ... I think to tie meaning too closely to understanding misses the point.

This misunderstanding is also about the discrepancy between language and reality, or object, which Ann Lauterbach has written about:

The world, for many poets, is apprehended as language; language is the material of the world. Every object is simultaneously itself and its word. For some poets, the word has more significance than the thing itself; for others, the thing takes priority over its word, and for still others, neither word nor thing has precedence. Although this might be seen as a mere matter of shift in focus, the consequences, in terms of the poet’s form, its construction, can be profound. Poets move around in the shadowy space between a word and its object, sometimes wanting to make the difference between the two appear seamless, and sometimes calling attention to the distinctions between them.

Not only this shadowy space is usable by poets, but the many diverse and specialist languages and objects the world offers are available as subjects. Dean Young responds to his interviewer asking about how he uses ‘the physicality of the world’ by referring to:

The junk of the world, which is maddening and wonderful. One great thing about the twentieth century is that any discourse can be poetic. [...] For instance in... I used mangled quotes from technical journals, which is not that experimental – it just allows tones to confront each other. That kind of collage is fun because it can really undercut what I’m doing. At some point I have to know what I'm doing, but that should be pretty far into the process.

In 1995 Robert Sheppard categorized his poem sequence thus: ‘The project Twentieth Century Blues is a “net/(k)not work”. One of its current aims is to link the unlinkable’, which is perhaps what Joe Amato means when he writes about the idea of ‘[e]verything in dialogue with everything else’. He also discusses this in another way:

Some poets stitch a kind of linguistic web between sites of picturing (description) and sites of telling (narration); some poets make clusters of sound which do neither and both at once, calling attention to the constellating properties of language, its capacity to confound temporal and spatial reality into a third thing: an event which participates in the construction of that reality. The idea that a poem can be granted the status of an event that shifts the course of cause and effect in a writer’s or reader’s life, has little to do with the idea of a poem as a bauble of verbal expressivity.

The poet Brian Louis Pearce asked me in an interview ‘How do you pattern your mosaic? Order your (found) dislocation?’ to which I replied ‘Same as all poets do. By theme, association, sound, rhyme, assonance, word count, syllable counts, visually, intuition.’ I would also agree with Dean Young , who suggests that at a certain point:

the poem takes on some kind of density, and it starts to coalesce. I may feel like there's a particular trace in it – like a narrative trace – that I can highlight a bit, to establish enough of a center of gravity so that other materials can be organized around it. Then I make selections in terms of musicality and measure. 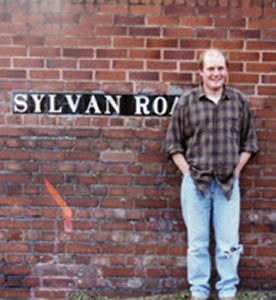 Rupert Loydell is Senior Lecturer in English with Creative Writing at Falmouth University, and the editor of Stride and With magazines. He is the author of several collections of poetry, including Wildlife and Ballads of the Alone both published by Shearsman Books. An artist’s book-in-a-box, The Tower of Babel, was published by Like This Press; and Encouraging Signs, a book of essays, articles and interviews by Shearsman. He edited Smartarse for Knives Forks & Spoons Press, From Hepworth’s Garden Out: poems about painters and St. Ives for Shearsman, and Troubles Swapped for Something Fresh, an anthology of manifestos and unmanifestos, for Salt. He lives in a village in Cornwall, UK, with his family and far too many CDs and books, and is currently working on a series of collaborative papers and chapters about the musician Brian Eno, as well as a number of interviews for the academic journal Punk & Post-Punk.
Posted by rob mclennan at 9:43 AM

Email ThisBlogThis!Share to TwitterShare to FacebookShare to Pinterest
Labels: On writing, Rupert Loydell