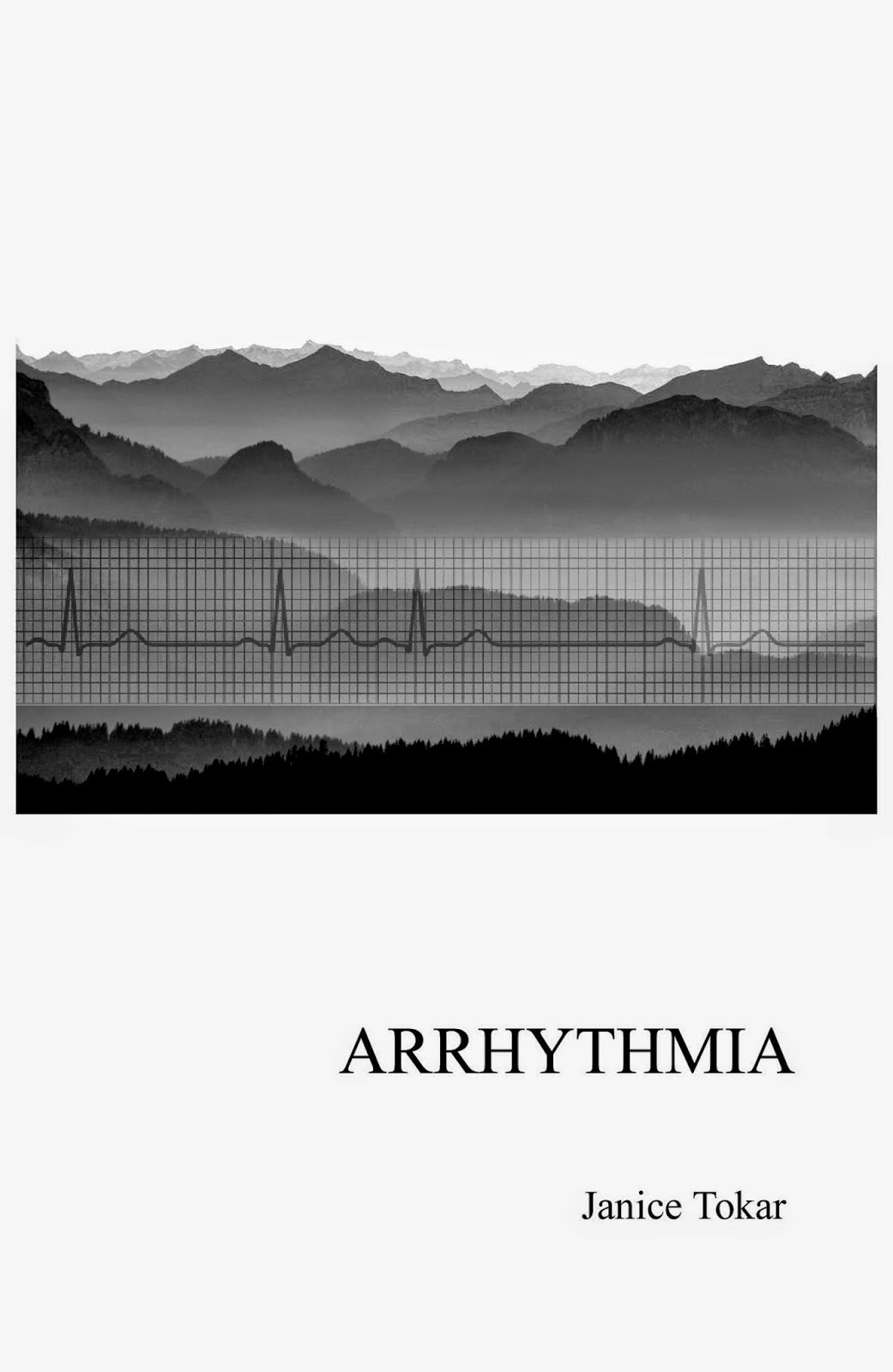 Much like the cover image’s interweaving mountain peaks, ARRHYTHMIA finds Janice Tokar communicating the elemental shifts of our landscape while drawing our eye toward a blurring point. With “Debris from the marshes/ bobs on the waves” and “The forest breathes north/ for a thousand miles”, her commentary seems more interested in how a region creates space and buffers time than any ecological or geographical concerns. It soon becomes clear that this almost sterile view of nature is burdened by its association to a familial tragedy.

what’s left
or can’t be left behind

but a permanent flaw

In my dreams
she cuts through the waves

with Olympian sureness and strength

I stumble along the shore

If Tokar’s voyage comes across as a conflicted homecoming, the “she” being revived and the arrhythmia passed down make up the sedimentary layers this text aims to plumb. Who is she? What happened to her? As a reader I’d rather have information withheld than offered up too freely, and the secrets of this long poem are addressed with genuine apprehension. As “last year’s calendar/ still mounts the wall” and “This year’s is hung/ loosely on top”, Tokar papers over a black anniversary. When a patch of seaweed looks “like tangles of gold-brown hair”, the poem inexplicably trails off. These clues deepen Tokar’s surroundings with an apparitional presence but too often return to surface details that mind ARRHYTHMIA's delicate atmosphere. The parallels relating distance as a physical expanse and as a proximity to aftermath work fluently; moreover, a mood-piece such as this doesn’t require a central arc or epiphany to welcome a closer reading. But whether the text rewards that closer reading is another mystery.

after
hard choices made

But the beginning rides in
on an ending’s wake

The above excerpt is rare in that it gives us plenty of back-story but scenery aside, none of these tidbits converse with Tokar’s surveying in a revelatory way. The same can be said for ARRHYTHMIA’s eleventh passage, which despite probing tough issues of abandonment and reconciliation appears completely removed from the pilgrimage that carries the poem.

Is it different with love
or, like crime,
does lack of intent
negate the offence?

the facts may speak for themselves

but reveal so little
of what we recognize
as true

The eloquence of this passage floors me, as Tokar meets an impasse between documented and remembered trauma with empathy. But these truths pop up devoid of the surrounding forest and its “patient resuscitation”, reducing some of ARRHYTHMIA’s misty descriptions to pleasant but unnecessary fog. Perhaps the sparseness is intended to stand in for the crux of the mystery, or at least reflect the distance that makes it so inscrutable. (The strong impression that “she” is a mother figure understandably skews the case’s objectivity.) Even if the reader’s appetite for discovery goes a bit underfed, ARRHYTHMIA is an off-kilter study that attributes loss and perseverance to the realm of nature – human or otherwise.