Join us for readings & conversation with
Sharon Harris and Christian Bök!

Free
A hat will be passed. 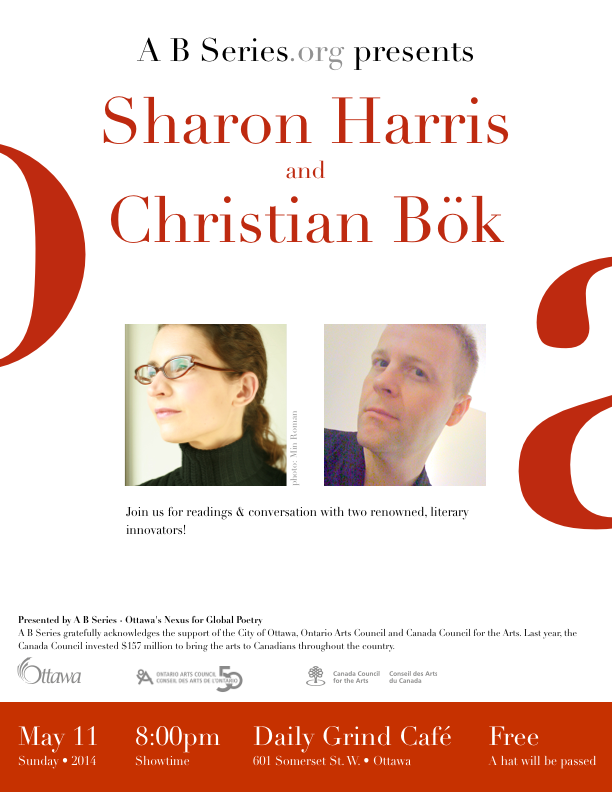 Christian Bök is the author not only of Crystallography (Coach House Press, 1994), a pataphysical encyclopedia nominated for the Gerald Lampert Memorial Award, but also of Eunoia (Coach House Books, 2001), a bestselling work of experimental literature, which has gone on to win the Griffin Prize for Poetic Excellence. Bök has created artificial languages for two television shows: Gene Roddenberry’s Earth: Final Conflict and Peter Benchley’s Amazon. Bök has also earned many accolades for his virtuoso performances of sound poetry (particularly DieUrsonate by Kurt Schwitters). His conceptual artworks (which include books built out of Rubik’s cubes and Lego bricks) have appeared at the Marianne Boesky Gallery in New York City as part of the exhibit Poetry Plastique. The Utne Reader has recently included Bök in its list of “50 Visionaries Who Are Changing Your World.” Bök teaches English at the University of Calgary.

Sharon Harris is a Toronto artist/writer whose poems have been anthologized in The Broadview Introduction to Literature, The Last Vispo, and Shift & Switch: New Canadian Poetry. She is the author of chapbooks from bookthug, In Case of Emergency Press, and above/ground, and her first full-length collection, Avatar, was published by The Mercury Press. She has written articles for Geist, The Globe & Mail, and Open Book Toronto; is a past contributor to Torontoist and Word Magazine; and her work has been published in The National Post, dANDelion, The Capilano Review, Drunken Boat, The Volta, broken pencil, and Vallum. I Love You Toronto, her exhibition of photographs, appeared in newspapers, magazines, and on radio and television across Canada.
Posted by Max Middle at 11:09 PM