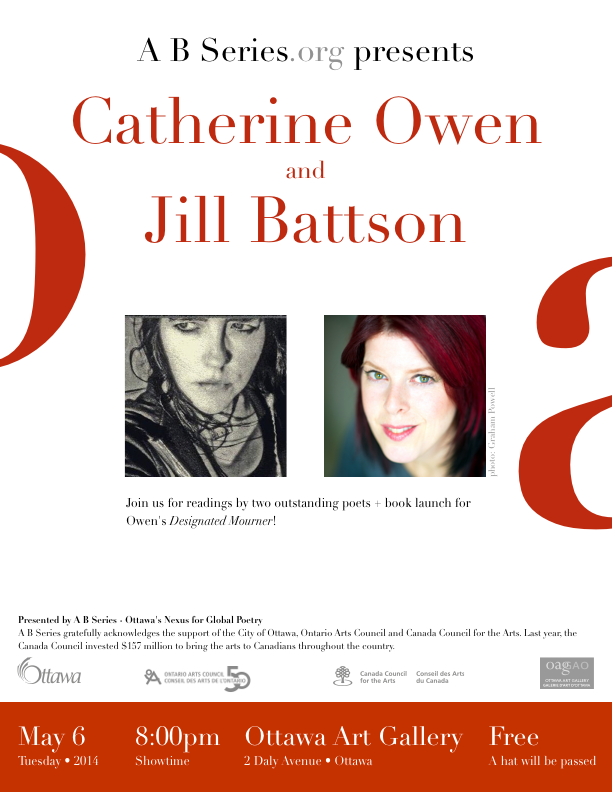 Join us for readings and a book launch with Catherine Owen and Jill Battson!

Free
A hat will be passed.

On May 6, 2014, Catherine Owen gives Designated Mourner (ECW Press, 2014) its Ottawa launch. She is the author of eight other collections of poetry, among them Trobairitz (Anvil Press 2012), Seeing Lessons (Wolsak & Wynn 2010) and Frenzy (Anvil Press 2009). Her poems are included in several recent anthologies such as Forcefield: 77 Women Poets of BC (Mothertongue Press, 2013). Her collection of memoirs and essays is called Catalysts: confrontations with the muse (W & W, 2012). Frenzy won the Alberta Book Prize and other collections have been nominated for the BC Book Prize, the Re-lit, the CBC Prize, & the George Ryga Award. In 2011-2013, she wrote five songs for the eco-musicalAwakening the Green Man, collaborated with multi-media artist Sydney Lancaster on Nest, served as an art model and writer for photographer Paul Saturley’s Pandemonium project, created a poemsong duo, The Lyrical Outlaws, and started a blog at blackcrow2.wordpress.com called The Relentless Adventures of OCD Crow. Owen edits, tutors, works on the TV show, Arrow, plays bass in Medea, co-runs Above & Beyond chapbook productions, and lives by the Fraser River. Her book of elegies, Designated Mourner has just been published and a chapbook called Rivulets is out from Alfred Gustav Press. Her web home is www.catherineowen.org.
Jill Battson is an internationally published poet and poetry activist who is Poet Laureate Emeritus of Cobourg, Ontario. She was responsible for creating and running the successful poetry reading series The Poets’ Refuge and has initiated and produced many poetry events including The Poetry Express – a BYOV at Toronto’s Fringe Festival; Liminal Sisters – a language poetry event; The Festival of the Spoken Word – a five day spoken word festival; Fightin’ Words – poets in a boxing ring; The Poetburo Slams and the hyper- successful Word Up – a series of interstitial poetry spots airing on MuchMusic and Bravo! which spawned a CD with Virgin Records and an anthology with Key Porter. She was the poetry editor for Insomniac Press from 1999 to 2001.

Jill is widely published across North America and the UK. Her first book, Hard Candy, was received to great acclaim and nominated for the Gerald Lampert Award. She has written several plays and solo works, including How I learned to live with obsession as well as Ecce Homo and Hard Candy – enhanced monologues for dance and voice. Jill has written the libretti for two short operas, Netsuke and Ashlike on the Cradle of the Wind, produced by Tapestry New Opera Works, and produced an electro acoustic sound art project, LinguaElastic, as part of the Canadian Music Centre’s New Music in New Places series. Dark Star Requiem, for which she wrote the libretto, premiered at Toronto’s Luminato Festival in June 2010. Her new project, Sleeptalker, will soon appear on stage. Jill’s third book of poems, Dark Star Requiem, was recently published by Folded & Gathered Press. Her new book, The Ecstatic Torture of Gratitude, has just been published by Guernica Editions. Gratitude Songs – a CD of selected poems set to music – is available as a free download from Bandcamp. jillbattson.bandcamp.com/album/gratitude-songs