As for ink over here, it begins in the words of French-Canadian songs memorized as a child, sung at late-night réveillions, or in the summer at the family cottage by the campfire.  Lyrics.  Lots of them.   In metre and rhyme often backed by a guitar and some kind of percussion, like a tambourine or spoons, the stomp of feet, or hands clapping time.  Playing with breath, voice, intonation . . . and emotion.  Everyone present took their turn.  I learned how songs could give powerful expression to feelings.  By my early teens I started to write songs.  Something I've done for a lifetime.

Another lifelong writing practice has been keeping a journal.  It now stands at fifty-thousand pages, give or take. If songs give expression to emotions, then the logbook (as I tend to call it) acts as a potent mind-amp.  In the logbook, the reach of complexity, strength of focus, and accuracy of recall all get boosted by the powers of ink.

Interestingly, many elements of Song and Journal can marry:  breath and focus,  emotion and complexity,  sounds and ideas,  feelings and language, rhythm and thought.

Looking at this marriage, it's not surprising that I soon wanted to write poetry.

Poetry's more intricate, I feel, than either logbook or song.  I can't see its borders.   Which makes it particularly attractive.

First, out of a desire to encapsulate some of the mysteries at here/now's edge.  Self-expression isn't exactly the correct term, though I've no objection to the word 'expression' by itself.  I find it very meaningful to try to give a body to that strange substance.  An incarnation.  That's at the core of why I even try.

Also, I've recently begun to feel something I'd not felt before.  Writing had always seemed a solitary pursuit;  I experienced no desire for publication.  Then I noticed how many others were trying to put their work 'on River', making efforts to pass it on.  I realized that what I refer to as my 'self' was in large part a patchwork of what I've found in thousands of publicly shared artworks.  Culture suddenly felt like a third, unrecognized parent.  So now, I sometimes add a publication attempt to my creative ritual as many others did for me.  I'm trying to keep faith with them.  In a solidarity tinged with thanks.

Beyond that, trying to write poetry presents such a complex and layered challenge.   It's not always easy, but when it succeeds it feels great to 'have written'.  Like very few other things in life, it provides me with a renewable 'tall enough mountain' to climb.  A proper gerbil-wheel for my cage, if you like.

Then there are my associations with members of the local arts community.   These exchanges result in a rich sharing of substantive 'notes on being'.  Artworks act as a starting point, providing something in common to build on.  I find this social aspect of poetry worthwhile.

There are other more transient motivations over time, but these four seem to have taken hold and keep me returning to the blank page.

How do I write poetry?

I've always had this Picture-Mind, or Pixmind as I call it, as far back as I can remember.  It provides me with an ability to call up free-flowing pictures, like snippets of movies, if I just get out of the way.  I often say it's like there's a constant stream of images out there on the horizon.  That I can choose to watch or not.

This Pixmind's centrally involved in writing poetry, for me.

Let's go through the actual steps, and you'll see what I mean.

I wake up at six or seven in the morning.  Grab a quick breakfast, sip a coffee.  I want to get downstairs to my poetry binder, pen and paper, as soon as possible.  Preferably within ten or twenty minutes after waking up, so that some of the sleepiness remains with me when I face the empty page.  A bit of dream-dust left in my hair, so to speak.

When I get there, instead of trying to stake out a linguistic terrain, I just wait.   And a picture comes.  With no fingers pressing.  Most of the poems I write, if you look, have an image at their core.
My approach involves writing a text-response to the spontaneous graphic output (as with ekphrasis: texts in response to graphic artworks).  It's almost like writing subtitles to a foreign film clip.  These 'subtitles' end up providing the first seed-draft for a poem.

At this point, the poem's still very incomplete.  I've no idea where it might eventually go or what it might mean.   But it hooks me well enough to stay with it.  I've often said that I like to write into, instead of out of, inspiration.  So long as I have this kind of visual seed to start from, I feel able to do that.

It's only later that the time comes for applying edit-transforms and somewhat more practical skills.   That work gets done on the computer.  Remove clichés, add some senses, adopt a voice & tone, orchestrate a confluence, play with rhetorical forms of meaning.   A few hundred fairly loose rules, more like tendencies towards certain do's and don'ts.  My goal with editing is to sculpt the words towards the original feel of the unscripted Pixmind.

I write poetry this way simply because other approaches don't seem to get me there.  Like anyone else, I prefer what works.

Along the way, poetry's become my favourite sort of ink by far.

Probably because it has such a mind of its own. 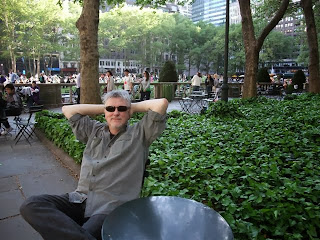 Roland Prevost's poetry appears in Arc Poetry Magazine, Descant Magazine, The Toronto Quarterly, Dusie, The Ottawa Arts Review, Stone Chisel, The Bywords Quarterly Journal, The Peter F. Yacht Club and Ottawater, among many more. He has four chapbooks: Metafizz (2007, Bywords), Dragon Verses (2009, Dusty Owl), Our/Are Carried Invisibles (2009, above/ground), and Parapagus (2012, above/ground). He's also been published in three poetry collections by AngelHousePress: Whack of Clouds (2008), Pent Up (2009), and Experiment-O (Issue 1, 2008 online). He won the 2006 John Newlove Poetry Award. He was, for a few years, the managing editor of seventeen seconds: a journal of poetry and poetics, as well as poetics.ca, both online. He studied English and Psychology at York University and the University of Manitoba. He lives and writes in Ottawa, Canada.
Posted by rob mclennan at 12:35 PM

Email ThisBlogThis!Share to TwitterShare to FacebookShare to Pinterest
Labels: On writing, Roland Prevost