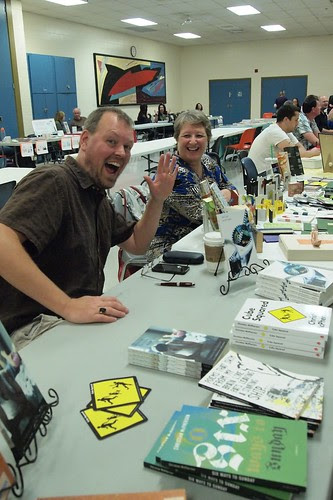 There's always loads to explore from poetry to punk, non-fiction to art pieces, handcrafted to materials, glossy to photocopy, kids books to magazines.

This year, Liana Voia did 2-3 minute interviews with various people with booths at the fair. Here is the interview with McPherson who does poetry and comic fiction of cubicle life, and the interview with Kritz who makes books and teaches people to make books. 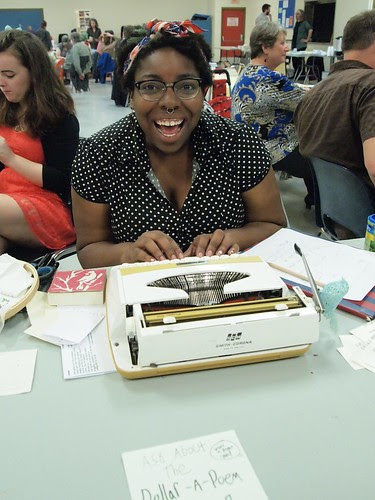 Around the corner Kimberley Dawkins was typing a poem for a dollar and selling copies of the Chrysalis Zine. Here's her interview.

It felt kind of weird not having a booth but going to and fro and chat and buy without having to watch for customers was nice too. 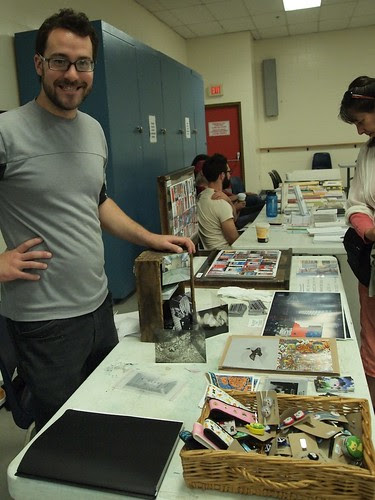 Matthew Thomson interviewed on his work, and that on his table of Dinah Zeldin, Rian Desourdie, Instant Crimson, as well as Mandi Morgan and Guillaume Vallée of the collective Organes Variables. 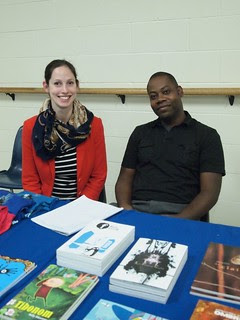 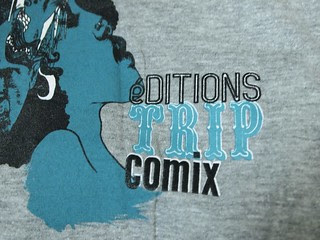 Similarly visual, and also from Montreal, are books by Edition Trip with a mixture of visual art and graphic novels, and collage art. Here's the interview with Stanley Wany. 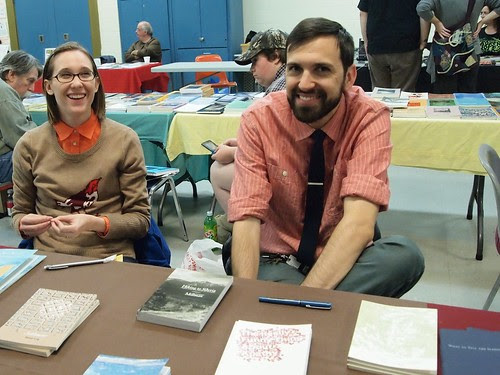 Also coming from away, the Buffalo people who were the featured readers in the pre-fair reading Jeannie Hoag and Brian Mihok representing SunnyOutside Press. Many kinds of physically wonderful and ideas complex books. 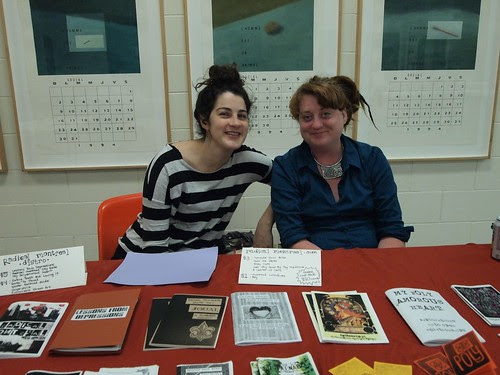 Also in from Montreal zines from Radical Montreal of zines on cycling and thinking left of self-centred. The interview with Sheena Swirlz.  (If I'd had the other bun, I'd have the 40 cents I was short for that one on eating clean, ironically enough.) 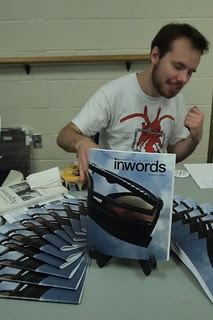 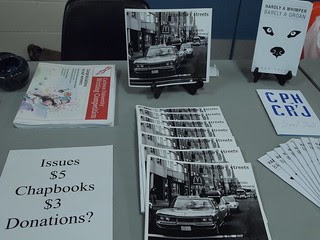 Local is In/Words with their new issue and chapbooks they've put out of their Carleton powerhouse. Watch the interview of Chris Johnson and J.M. Francheteau. 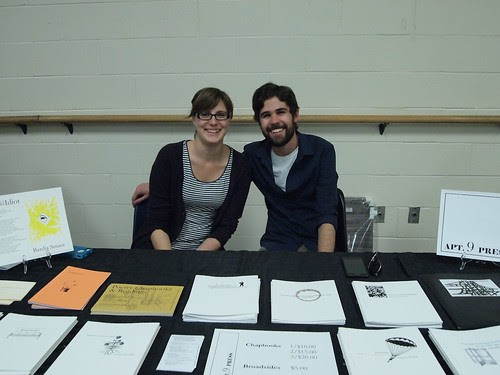 Jenn and Cameron of Apt 9 Press

At the other end of newness scale is R.M. Kozan whose Fresh Blue Ink is out its first publication. Andrew Simpson's first book Versus the Neanderthals was on hand too of about 60 flash fiction/short stories. 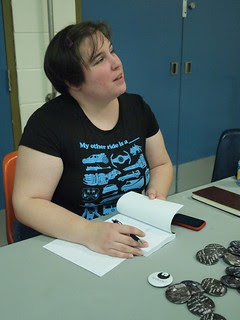 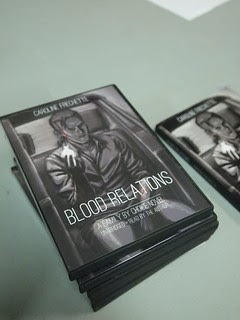 Caroline Frechette of Renaissance Book Press has copies, on digital or paper, and was happy to sign a copy. 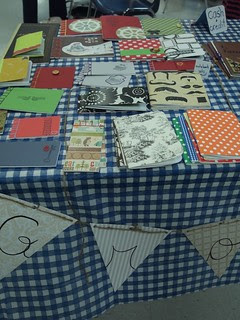 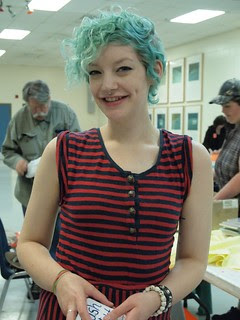 Jessica Bebenek of Grow and Grow actually takes cash and credit. Most don't and I didn't notice until I was out of cash (again) and she was packing up.

I didn't end up making it all the way around the room. I missed at least half a dozen tables including Sheree Bradford-Lea who does cartoons on various things, mugs and paper.

Arc was represented by various shifts of people but Monty Reid and Jenny Hayson for the interview. And Bywords Online literary Magazine. Here's the interview with Amanda Earl of Bywords and AngelHouse Press. 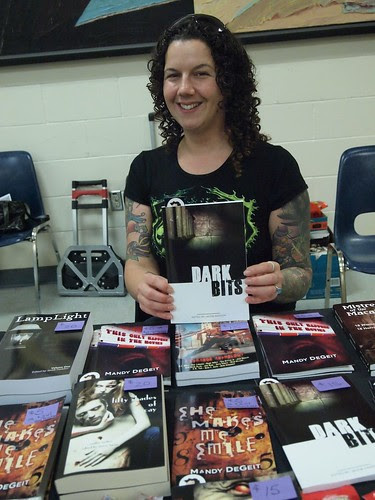 Mandy DeGeit's interview and her site. 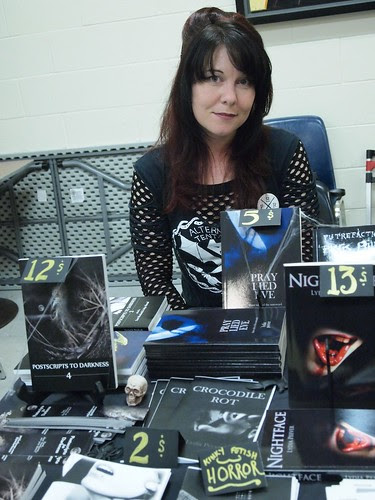 Lydia Peever's video and her press, NightFace of horror fiction. 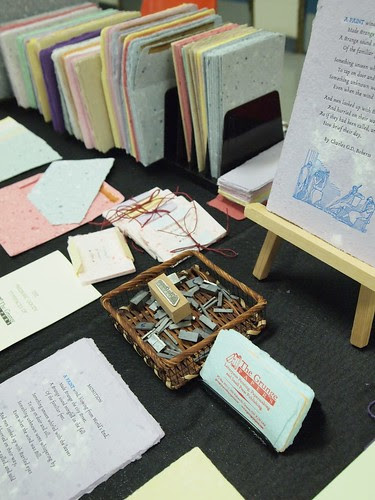 Grant Wilkins on his handmade papers and letterpress at Grunge Papers.

Voia ended up taking more interviews than I did photos. Here are ones with Kristin Groulx and John David Hickey with Groulx's wares, Jennifer Arbour Saint-Saëns, Dalton Derkson and Hurtin-Crue Press. There was a kid's books with a table was Charlie's Sparrow and the Secret of Flight by David Anderson and Monica and the Giraffe by Chani and Monica Dumont from The Success Room.

Some of my small press loot: 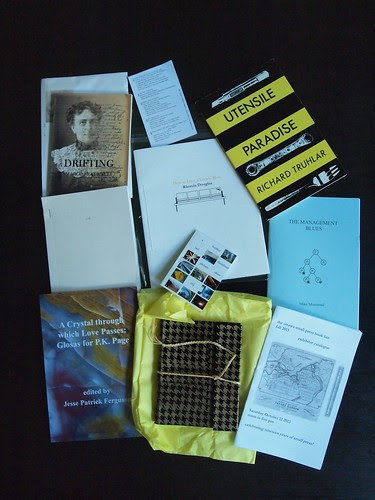 at 10 o'clock, Drifting by Marco Fraticelli (Catkin Press, 2013) which I've heard about for it seems like a year already, but it's been underway for 30 years. His sister Rina Fraticelli and he used found diaries from an abandoned house. The creative outcome for her was this BRAVO!Fact short film from a few years ago, Iron Hill. We'll talk about that book on an upcoming Literary Landscape. It is published by a new Ottawa Valley Imprint, Catkin by Claudia Coutu Radmore 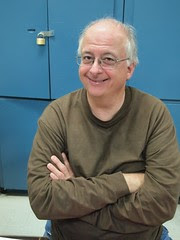 At 12 o'clock, How to Love a Lonely Man by Rhonda Douglas (Apt 9 Press), Utensile Paradise poems by Richard Truhlar (from 1987 via Apt 302 Books), The Management Blues by Mike Montreuil (pictured). (At 4 o'clock) the exhibitor catalogue. (at centre clockface) a further last thumbnail picture show of fiction shorts from Adam Thomlison of 40 Watt Spotlight. Here's the Thomlison's interview.

At 6 o'clock) a handbound lovely notebook by Mary Kritz, a Crystal Though Which Love Passes, Glosas for PK Page by Jesse Patrick Ferguson (Buschek Books). It has a lot of writers in there that you would recognize, or should, including locals, Vivian Vivassis and Sandra Ridley. Here's the interview with John Buschek.

At 9 o'clock, iii by michael e casteels' puddles of sky press. I will buy everything he makes, or close to it, just like Apt. 9. here's the interview with Casteels who, below, is busily still assembling books whenever there's a lull. 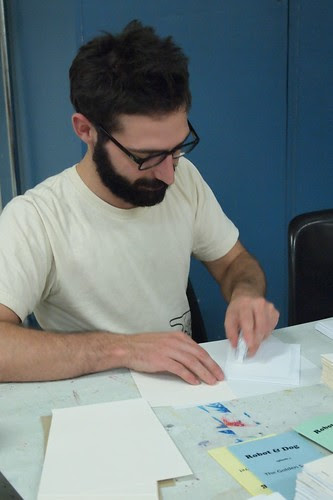 Thanks to rob mclennan of rob mclennan generalamazingness. You can get above/ground subscriptions for 2014 now. 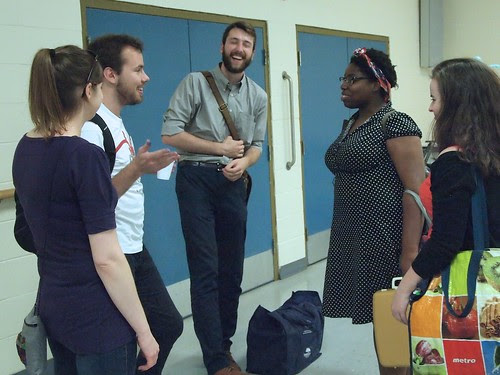 Packing up, cracking up, time to close the tables for another half year.
Posted by Pearl at 2:19 PM