From some notes for a writing workshop
Ken Sparling
“Something about how some guys will dine you before laying on you something heavy.”
-from ‘blue toenails’ by Golda Fried

GARY LUTZ: With Gordon Lish, who essentially said that if you want to write, you have to look into yourself for what it is that distinguishes you from every other person on earth. It might be something so. I just want to pursue what I learned from Lish, which is to, well—he uses the word quiddity, which means that which distinguishes someone or something from everybody else.
LUTZ: I write on the computer, and in early drafts of my stories I use a very large type size—maybe 18, 20, that sort of thing—so that there aren't that many words on the screen at one time. Then I can look very closely into the letters that constitute the words—and I try to look at the typographical physique of one word and see how it might interrelate to the word after it. As I get more into the drafts I use a somewhat smaller type size. I like to be aware of what I'm writing—of the physicality and materiality of the words—words simply as things, and I try to divorce them as much as possible from their conventional meanings. I think it's a way of forcing myself to divorce myself of any kind of journalistic approach to writing.

Finally the van was approaching the drive into the city and it could only encroach so far. –Golda Fried (from Darkness then a blown kiss)
the thing where you use a thesaurus to get better words into your story/poem and you wind up with something awkward. Golda plays this.

The sun was still hurting even with the shades. But at least Wane couldn’t see my eyes. My Salada eyes. The way he called them that. The way he showed me around the kitchen, consumed all liquids. My Salada eyes. He wanted to milk them and leave them white. My eyes widening on their way. –Golda Fried
My Salada eyes. He called them that. He showed me around the kitchen. He consumed all liquids. I smelled vinyl. Kitchen chairs. He wanted milk, so he opened the fridge. Light. Five in the morning. We were still up to it. He tipped the glass. Milk rode his upper lip. Milk my eyes, I told him. He wanted to leave them white. My eyes were widening. We were on our way.

“the overarching vision, or whatever you want to call it, in your story will become apparent when you stop believing in it and it doesn’t disappear.” - from the Philip Dick intro to I hope I shall arrive soon

page 3: “The problem, then, is that if subjective worlds [words] are experienced too differently, there occurs a breakdown of communication… and there is the real illness.”

Each word is a world that you’ve populated in your mind.

A lot of the work I do involves disabling the mechanisms that hold a piece of writing together. I didn’t make a conscious choice at any point in my career to do this sort of work. And the only reason I can tell you about this is because I’ve been doing it so long that I’ve been able to look back and detect some patterns.

So, for example, I take apart books…

Like I say, I didn’t come to this by choice, but I believe my intent in taking things apart is to make me feel as though I’m exercising a measure of choice in how I put things together - that how I put things together isn’t entirely determined by external factors. In other words, writing is a way for me to explore the possibility of acting freely, what that could mean, how it could come to manifest in the world. 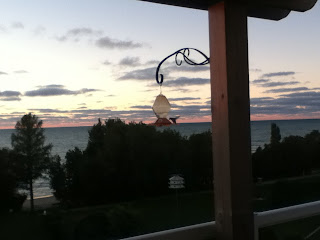 Ken Sparling is a writer. Google him if you want to know more.
Posted by rob mclennan at 10:34 AM

Email ThisBlogThis!Share to TwitterShare to FacebookShare to Pinterest
Labels: Ken Sparling, On writing

I like the idea of taking a piece of someone's writing and re-writing it in your own words to create a totally new and original piece. I would like someone to be interested enough in my work to do that. I wonder what I'd say, who I'd be, in someone else's mouth?