Each year Bywords awards a prize for poem of the year. The John Newlove Poetry Award for 2007 was given Oct 15th at the National Library and Archives to a standing-room-only crowd. The beginning of the awards was preempted by an announcement by Sean Wilson of some special business. An surprise open-book-shaped birthday cake was presented to Amanda Earl as the event coincided with her birthday. The whole room sang happy birthday. The event further opened with some ambiance of more music, this by John Carroll.

Dr. George Elliott Clarke was on hand. He had received for blind-judging 60 poems which were published on Bywords.ca between September 2006 and August 2007. From these poems, he selected four honourable mentions and a winning poem. Each honorable mention and the top poem's poet got a festival swag bag, and a lot of applause.

(You can read each winning entry in entirety at the title's link.)

Honourable Mentions this year included two poems by the same poet, Wanderjahre and Getting On by Gregory Myers. Gregory Myers unfortunately could not attend but his poems were read by the editor Amanda Earl. 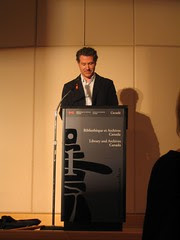 I'm Just Saying by cb forrest (above) was also short-listed. He read a couple other poems including what happens at a bachelor party with liquor enough for 150 when 15 show up. 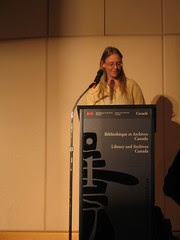 Kitchen by Katherine Hunt was awarded an honorable mention as well. Other poems included one of waking up and watching a lover still sleeping.

The winner this year won a chapbook deal, with production and editing assistance and the new John Newlove Anthology.

Pygmalian and Galatea by Sean Moreland was the top winning poem for 2007. He performed a piece about walking thru a gallery and entering painting's reality in a sense. 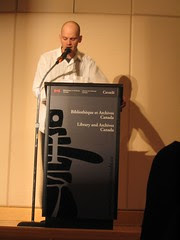 The evening also contained the launch of chapbook of the 2006 John Newlove winner. 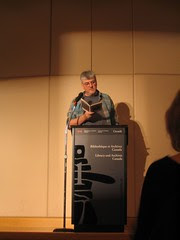 Roland Prevost with his work, MetaFizz, the resulting chapbook of last year's award from his winning poem at the pizzeria : 100% real juice . New poems included one with this excerpt pace a cold hell &/ show a brave cargo of teeth. 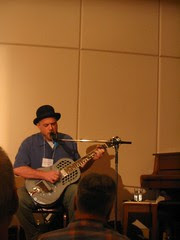 Blues guitarist John Carroll took us into (and out of) the event with some amazing fingerwork and raspy voice. He had 3 CDs left but his current new album is underway.
Posted by Pearl at 6:53 PM