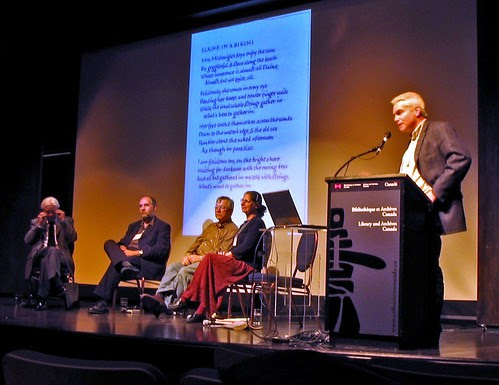 The reading to the memory of the poet, George Johnston. It was fairly well attended as well. Perhaps 70 or 80 people came, including his sister who in the question and answer period gave a snippet of memory of the poet as a young man in church, a critical thinker and a good friend to her.

Different aspects and eras of his life and his writing life were shared by people who walked with him at different stages. The panel was to be with Robyn Sarah, John Metcalf, Mark Abley, Robert Hogg, Bill Hawkins and Stephen Brockwell. Bill Hawkins unfortunately was ill and couldn't attend however there was a lot of ground covered as is.

Two of the panelists have written books on the writing of this Canadian poet. He was widely anthologized, worked in formal verse and in translating Nordic poetry. Robyn Sarah wrote The Essential George Johnston this year. John Metcalf edited a number of his Nordic translations and did a seminal collection Endeared by Dark [described here among other places.] Robert Hogue knew Johnston for years, when both of them were teaching at Carleton. Johnston was remarkable for his cam equanimity, his peaceful intelligent character. Hogue contributed to The Old Enchanter which were essays on the man.

Sarah took one sonnet and unpacked it entirely. Mark Abley talked of a reading Johnston and he did in Concordia where they were the youngest two there, by a decade or few. Johnston held his own and taught many lessons, including the value of respecting your own work enough to learn it, take it seriously enough to own it, claim it, recite it. All the speakers were in respect for how Johnston was able to use poetic device enough for it to be invisible, not drawing attention to itself. He had a love of play of life and language. John Metcalf pointed out that how Johnston is not more well-known than he is is partly a matter of timing. As Johnston's first book came out, the confession school of writing and Lowell's Life Studies was taking off. One must be a suffering poet, and that wasn't what Johnton was about. He liked controlled meter, used form that became increasingly compressed over the years and a joy he wanted to inject, or naturally let flow thru of his life and thru his writing. He wrote about domestic things working, about northern climates and community when the individual and anomie was getting center stage. Nonetheless his poetry is still being read and appreciated. There's even a poetry award in his name, established in 1992. His precise love of sensitive use of the sounds of words to augment and reinforce meaning and reinforce life forces themselves makes his tight poems something people keep going back to.